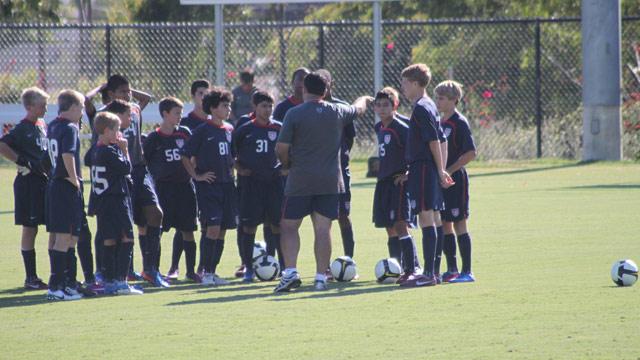 CARSON, California - Eighty players; all from different club backgrounds, with some closer to physical maturity while others have yet to hit their growth spurt.

The thought of it, let alone the actual sight of it at the Home Depot Center, is enough to make ones head spin. But not the coaches of U.S. Soccer.

No, the conductors of the U.S. U14 Boys National Team ID Camp have a pretty good handle on the crowd. Over the first four days of the weeklong camp, they’ve been able to sort through the collection of players and keep their focus on the overall objective. 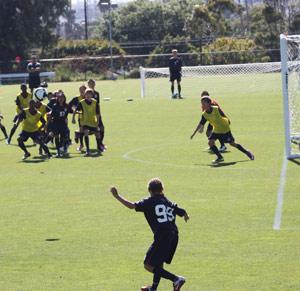 A corner kick is taken at the U14 BNT camp in Carson, CA.

“Finding gifted, talented kids,” said coach Manny Schellscheidt. “At this stage it’s about talent. You identify that and then you work with them and hope they grow in every possible way. Right now we have some pretty interesting guys.”

We’ve previously mentioned some of the intriguing prospects in the early going, including players like Trey Vinson, Joseph Schmidt, Folasanmi Adetola, Christian Pullsic and Sean Teixeira – just to name a few.

Schellscheidt and his staff have continued to take an interesting approach this week of shortening the scrimmage numbers. On Wednesday, the U14s did expand a little to some 8v8 action and could possibly see some full field battle by the week’s end.

But up to this point, the group has mostly showed off its skills in the scoring area which is exactly what the coaches want.

“What you see a lot (in the game of soccer) is we can’t always get it done finishing in front of the goal or defensively,” Schellscheidt said. “So why not spend more time there?”
Beyond scrimmages, the squad has undergone a good deal of training during its two-a-day sessions.

One of the drills calls for the team to simulate play without using their feet, with each player holding his position upon catching the ball. It’s a maneuver that requires each player to think more precisely about moving without the ball along with tactical awareness.

The troop of goalkeepers have undergone their own set of drills and yielded some impressive performances.

Andrew Romig has been a constant presence and vocal leader in the box while Kevin Silva has shown that he isn’t afraid to throw his body around. Silva is a young stud who has already competed overseas with his U.S. Club id2 National Selection squad, and he looks comfortable in the U.S. Soccer environment.

Most of the players appear to be coming out of their shell as the camp moves along and it will be interesting to see which standouts separate themselves from the pack in the final few days.
Not that Schellscheidt and his staff will have any difficulty identifying the players who possess what they’re looking for.

“They’re all just kids so none of them are fully developed,” Schellscheidt said. “You’re looking for gifts, and from there it’s the whole package that needs to move along.”
U.S. U14 Boys NDP Identification Camp Roster by Position