Playing only three games, the U.S. defeated Norway, 2-0, after tying England, 0-0. It’s opening game of the tourney against Sweden was called off midway through the match due to an electrical storm.

The event meant the first European trip for Alaska native Kelly Cobb, who found the back of the net against Norway. Arizona resident Julie Johnston, meanwhile, was being fitted into a new role, leading a U.S. defense that didn’t allow any goals. 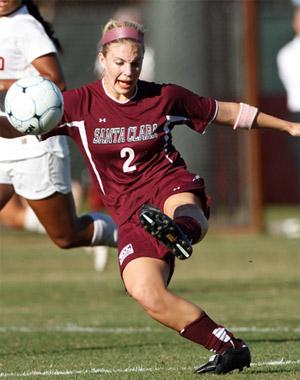 Julie Johnston
“This was the first time I played internationally as a defender so I was definitely a little nervous,” Johnston said. “The connection and communication from the back-line was awesome, and we had great pressure covering the field. I believe we gave up only two corners and two shots on goal.”

However, it was a turbulent start for the Americans, as their first game against Sweden didn’t reach its full 90 minutes. After playing a half in heavy rain, lightning, and thunder, the game had to be deserted with a 0-0 score.

“If it hadn't been for the lightning, it resembled spring high school soccer weather in Alaska,” Cobb said. “It was cool, windy and the rain was coming down in sheets. In summary, it was miserable.”

The U.S. match against England didn’t go that much better. Even though the team outshot England 11-1, the Americans couldn’t find the back of the net and settled for a scoreless tie.

On the last day of action, the U.S. finally had some fortune turn its way as it downed Norway 2-0. Just eight minutes into the game, Cobb grabbed her first international goal, and propelled the Americans to a 1-0 lead.

“I received a through ball down the left sideline from Morgan Brian,” she said. “I was able to beat the defender to the ball and dribbled to the edge of the 18-yard box. I cut in and took a shot with my left foot which found the lower right hand portion of the net.”

With 10 minutes remaining, Solar SC’s Taylor Smith put the game out of the reach, making it 2-0 on an assist from Cobb.

This competition is another small step the U.S. is taking to prepare the squad for next year’s CONCACAF U20 Women’s Championship, which is a qualifier for the 2012 FIFA U20 Women’s World Cup, to be held in Uzbekistan.

“It was a great experience, it was a chance to put together what we have learned in prior camps and implement it into international competition,” Johnston said of the trip to Spain. “We had a great group of girls and great team chemistry on and off the field, and truly came together and played as unit.”