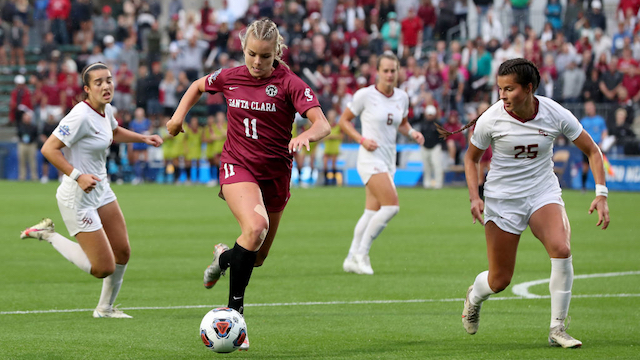 It feels like the college season just ended, but the calendar indicates that there are only two weeks left before preseason camps open up on campuses across the country. The quick offseason, and unusual upcoming season is going to make the 2021 campaign one to remember.

NCAA, the governing body of most college athletics, awarded an extra year of eligibility to all players, which is going to have some rosters out of balance for some time, but could make the upcoming season even more exciting.

Defending champion Santa Clara brings back stars Alexis Loera and Kelsey Turnbow as they attempt to repeat this season. Marshall, the other defending champion from Division I, will need to replace a key player after Jamil Roberts joined the professional ranks.

With so much intrigue this season, there are plenty of storylines to watch, but there are a few clashes that stand above the rest from the schedules released so far. Here are the five games to watch for the 2021 Division I season.

Former UCLA assistant coach Nick Carlin-Voigt returns to Westwood with his squad this fall for early match-up that could be telling regarding the quality of West Coast squads for this fall. Portland is playing against Air Force, Denver, and Oregon State in the first two weeks of the season. The meeting with the Bruins also has added significance from the history of the coach, but for recruiting battles too. Portland has gone into Southern California and pulled out some of the top players to join the Bluffs. If UCLA is going to return to the top of the college game, keeping those recruits at home would go a long way to rebuilding the dynasty. One of Portland’s top talents, sophomore Buba Fofanah, is one of those who left Southern California after high school. UCLA has gone about rebuilding the roster in a variety of ways. The Bruins had some success with transfers as former Utah Valley defender Ahmed Longmire was very good during the spring. UCLA added former American Athletic Midfielder of the Year Yoni Sorokin to the roster for this season. Brandon Zelaya, Mauricio Gutierrez, and Aaron Edwards are also highly rated recruits joining UCLA for the upcoming season. As the new UCLA coaching staff continues to navigate coaching and recruiting in the Pac-12, the result of this game will be interesting tell for the two programs.

We had a little glimpse at the future Texas team during the spring with the early arrival of Alexis Missimo. The talented freshman had three goals in three games during the spring - all wins for Texas. Missimo has some friends joining her on the roster in the fall. Trinity Byars is expected to make a big splash with this group. With Missimo and Canada national team midfielder Julia Grosso setting the stage, Byars is going to have a field day with most of the defenses in college soccer. Georgetown will be a fun challenge. The Hoyas are one of the best coached teams in college soccer. They’ll be prepared for the new studs on Texas, which should make this a fascinating battle early early in the season.

It’s rare to get this type of challenge for a defending champion this early in the season, especially against a College Cup squad from the previous season. This game speaks to the two coaches of these programs. Neither is afraid of the challenge and wants to find out about their new teams immediately. Santa Clara brings back the key pieces, but I believe there will be a few freshman who push for playing time pretty early on in the campaign, which could give the team a different, more dynamic look. Virginia’s run during the NCAA playoffs revealed the identity of the team and the belief they should beat anyone on any given day. Keeping that level as the standard will be the challenge for the fall. The quality of Lia Godfrey in the midfield will be the key for the team in games against teams like Santa Clara.

Marshall, the program, has emerged as a lightning rod for the state of men’s college soccer. There are people who hate what Marshall’s success means for men’s college soccer, as they view the older roster with predominantly international influence as a negative for the state of the game. The championship-winning side from 2021 played beautiful soccer when all of the eyes were on them in the final game. Chris Grassie has advanced the game at this level, without question, from his previous success as an assistant and now current victories as a head coach. If you are a fan of college soccer, Marshall is a team you have to watch because Grassie and his staff are special. The great news is that Marshall is going to be tested immediately against Virginia Tech, a team that had a playoff run as well.

Michigan State got their new head coach with Jeff Hosler. It’s probably a bit too ambitious to expect much in his first season in charge of the program, but a late season meeting with rival Michigan will always be something to watch. Hosler is a famous name in the college soccer world thanks to his previous success with Grand Valley State at the Division II level. The results speak for themself, but his team would play too and the same expectation is in place for this group at Michigan St. The Spartans won one game in 12 attempts during the spring season, so this is a team to watch from a rebound standpoint.