Perhaps no bigger story will be followed in 2013 than what new Akron head coach Jared Embick manages to pull off in both recruiting, and when the team heads to the field. 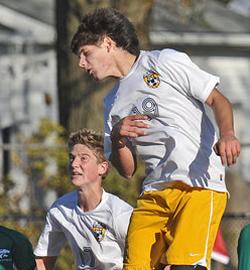 The class of 2013 continues to grow for the new head man, as Embick recently landed the commitment of IMG right back Brett Gravatt, who unsurprisingly liked what he saw from the team on the field.

“I chose Akron because of their style of play, very possession based,” he told TopDrawerSoccer.com. “I am also a fan of the coaches I feel I will be able to develop as a player at Akron.”

Gravatt is likely to get the chance to earn the starting right back spot with DeAndre Yedlin’s early departure to the pro ranks earlier this year.

Henry Chancy’s decision to commit to Ohio State isn’t exactly breaking news – he committed at the end of 2012 – but it was a decision that took awhile to make.

“After looking at my options and making sure that I had completed my other college visits, there was a clear winner in my mind,” Chancy told TopDrawerSoccer.com. “Ohio State had everything I wanted.  The soccer program is very successful and the coaches and team design fit my playing style and liking. Coach [John] Bluem told me where he could see me fitting in given their style of play. Ohio State is all about big time athletics, and I really fell in love with the school spirit and excellence that it always strives to achieve.”

On the field, Chancy saw a program that can set him up to succeed over the next four years in Columbus.

“I was very impressed with the coaching staff,” he said. “Coaches Bluem, [Frank] Speth, and [Taly] Goode have been working together for a long time, and they know how to train and push their players to the next level.

“They like to keep the ball, but when the gaps open up, they attack with numbers. They also have a very big fan support and home games bring in big crowds. The success that they have had in the past also intrigued me, and I hope to add to that success by the time my four years are up."

“I committed to Wright State University because they are Division 1 and play at a high level,” he told TopDrawerSoccer.com. “I liked how big, quick, and skillful each player is on the soccer team and I also like the amazing coaching that I’ll be getting from the soccer program.”