Perhaps the Virginia men’s soccer program is aiming to change its name to Red Bull South one day.

The acclaimed program recently picked up its third commitment from a Red Bulls Academy product for its 2015 recruiting class, receiving a verbal from standout midfielder Derrick Etienne.

“When I narrowed down my choices, there were a few things that stood out to me and drew me to Virginia,” Etienne told TopDrawerSoccer.com. “Of course I want to go to a great school academically and athletically, which Virginia is, but I wanted to be at a school where after soccer season is over, I would still enjoy being there. I really liked the campus and I loved the facilities for training and of course the possibility of playing in front of the fans at Klockner Stadium. 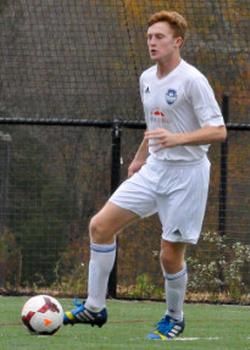 “Finally, after talking to Coach Gelnovatch, hearing his plans for the next few years and seeing their style of play this season, I saw that if I continue to work hard and develop, the kind of player that I am could fit in with their system and plan to hopefully win championships.”

Every youth player is competitive, and UVA’s championship pedigree didn’t hurt, as Etienne is hopeful he can help bring another title to the program.

The school’s reputation of turning players into professionals didn’t hurt either.

“I like that they have a history of bringing in quality players who do well at the university and go on to be professional soccer players,” he said. “I like that they are attracting creative and skillful attacking players to have an attractive style of play.”

Away from soccer, the campus was just what Etienne was looking for as well.

“I come from a relatively big high school, so I like that the school is not too big, but not too small and not too far from home,” he said. “UVA is perfect for me. My family is big on academics so I really like UVA's degree completion program that if I was fortunate to play professionally before graduating, I could return at any time and still get my degree.”

A tall, imposing center back, Remington Frost has always had to fit for his starting spot at the club level. He’s looking forward to doing the same for William & Mary in the fall of 2015.

“The quality of the school sells itself,” Frost told TopDrawerSoccer.com, “but the soccer program Coach Norris runs is a perfect fit for me. The Tribe plays very disciplined soccer. Everybody on his team defends and everybody attacks. Nothing showy, just solid soccer basics in every position so the whole team moves like a unit.”

Frost was certainly encouraged by the team’s success last season in both the RPI and landing a tournament spot in the fall of 2013.

“W&M has a super successful soccer program compared to the sea of much larger Division 1 schools,” he said. “Their success shows the character that is behind the program. This year, the Tribe soccer program was consistently ranked in the top 20 in the RPI poll and was one of only 48 schools in the country to make it to the Division 1 NCAA Tournament. I don’t think there is another program this highly ranked in the country that I could expect to come into and contribute to as quickly because of our similar styles of play.”

Defender Jordan Speed (Dallas Texans) has committed to Tulsa for the class of 2014.

Midfielder Brett Giuliana (PDA) committed to Delaware(m) for the class of 2014.

Forward Sergio Lujan (Kendall SC) committed to Niagara for the class of 2014.