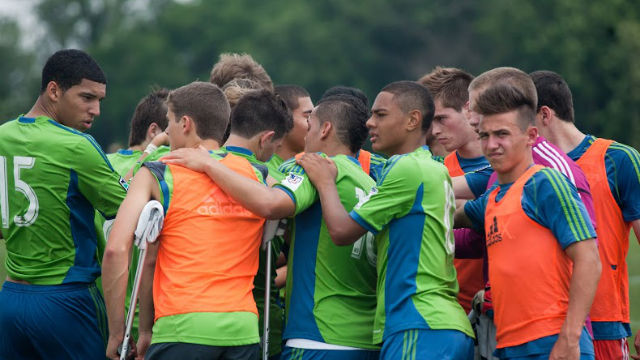 There’s a new format in the Development Academy season. Instead of sending group winners to Finals Week, eight quarterfinal matchups will be held across the country, with the four winners from each age group then traveling to Carson, California in mid-July to crown the 2013-14 Academy Playoff champions.

Here’s a preview of the eight quarterfinal games:

How they got here: An all-MLS Academy clash sees the Canadian side travel across the country to visit the Sounders. Montreal won its group on the strength of a surprise win against LA Galaxy on the final day of action at the Academy Playoffs, and its 3-2 win against the Galaxy should signal warning signs to the Sounders. Seattle was extremely impressive in Indianapolis, scoring 16 goals across three games, winning all three.

Players to Watch: Plenty of talent dots both rosters. Seattle’s strength is at both sides of the field, with former U17 goalkeeper Paul Christensen between the posts, and Seyi Adekoya, Satoshi Chaffin and David Olsen all with double-digit goals. Fabio Moelli scored the goal from the penalty spot that sealed the Impact’s passage to this juncture. 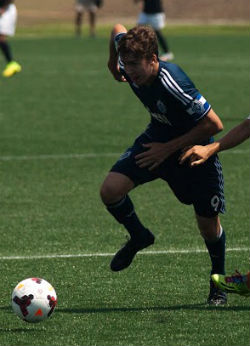 How they got here: Winners of four straight games, including all three in Indianapolis, FC Dallas’ quality precedes itself. They outscored Charlotte Soccer Academy, Portland Timbers and Chicago Fire 6-1 en route to the quarterfinals. The Rush won a decisive clash on the final day of group play, a 2-0 victory against the Carolina Rapids that punched their ticket. These two teams are no strangers to each other, both based in the Frontier Division. FCD won both matchups earlier this season. The last game Colorado lost in 2014 was 1-0 against Dallas back on March 9, a 12-game run.

Players to Watch: Another team with quality all over the field, Shaquell Moore, Aaron Meyer and Coy Craft were all instrumental in helping FCD make the push to the quarterfinals. It’s not quite the same talent level of past teams, but there’s plenty to look out for. Midfielder Apostolis Apostolopolous and his 10 goals top the team’s scoring charts, while Eduardo Reza has played all but one game this season.

How they got here: Possessing the best attack in the Dev. Academy (from a statistical perspective), Bethesda-Olney scored 15 goals, running away with its group. Chivas USA won its group thanks to a 2-1 record, scoring seven goals against Capital Area Railhawks, New England Revolution and Houston Dynamo.

Players to Watch: Bethesda-Olney possesses a wide swath of talent. Forward Jeremy Ebobisse-Ebolo scored nine goals at playoffs, boosting his total to 38 goals on the season. That’s just the tip of the iceberg, as Jake Rozhansky, Matthew Ledder and Chase Gasper are also top quality players. The task will be tough for Chivas USA, as one of its best players, Paul Salcedo Borrego, is unavailable because of early enrollment at California. Homegrown signing Caleb Calvert will likely lead the attack.

How they got here: After a 0-0 draw against Crew Soccer Academy to open the playoffs, PDA bounced back with two wins against De Anza Force and Real So Cal to win its group. Shattuck headed into a final day matchup with the New York Red Bulls, and got the draw it needed, winning its group on the strength of goals scored during its week in Indy.

Players to Watch: Brian Whit’s hat trick helped fire PDA to this point, and the future Duke player is a real handful defender. Jake Areman is a smart and tidy player heading to Maryland(M) in the fall. Future Creighton forward Ricardo Lopez-Espin has 20 goals on the season, and the target man is likely to see a lot of action at this stage of the season. Lesley Nchanji offers pace and danger on the wing.

How they got here: Edging a 1-0 encounter with Crew Soccer Academy Wolves on the last day of action at the Academy Playoffs, secured first place for the New York Red Bulls in a group with Colorado Rush and Bethesda-Olney. A dominant defensive effort saw Strikers FC win its group without conceding a goal, winning twice and tying once against PA Classics, Montreal Impact and Sounders FC.

Players to Watch: U.S. U17 MNT defender Tyler Adams played a key role in the team’s progression, though he could be unavailable with U17 national team camp going on starting next week. Gideon Metrikin is a midfield talent to watch, while Ethan Lochner led the team in goals scored throughout the season. Goalkeeper Dakota Havlick helped guide the Strikers to its three shutouts in the playoffs, while Shinya Kadono is the team’s consistent danger man from midfield.

How they got here: The Whitecaps won all three of their games at the playoffs, outscoring Match Fit Academy, Houston Dynamo and Weston FC by a score of 7-1. Quietly one of the best teams in the U16 age group, Chicago Magic PSG won twice and tied in games against Albertson SC, Philadelphia Union and Kendall SC to win the group.

Players to Watch: Another high-scoring Canadian youngster, Dario Zanatta scored four goals in three games for Vancouver, and is the team’s most consistent attacker with 25 goals on the season. U.S. youth national teamers Elijah Rice and Marquette commit Luka Prpa played prominent roles at the playoffs and must be on their game in the Pacific Northwest.

How they got here: Despite a final day loss against St. Louis Scott Gallagher, Real Salt Lake won twice and scored enough to win its group against Scott Gallagher, Georgia United and NJSA 04. The San Jose Earthquakes topped its group by winning a tiebreaker with FC Dallas, getting two wins against Orlando City and Shattuck St. Mary’s. The Earthquakes won the regular season matchup between the two sides by a 4-3 score line.

Players to Watch: Six goals in two games isn’t a bad haul, and that’s what RSL forward Sebastian Saucedo managed against his playoff opponents. He has 29 goals on the year, to lead all U16 scorers, and is one to watch for sure. San Jose’s Ivan Valencia helped propel his squad to this game with three goals from three games in the playoffs. Amir Bashti and Uriel Cordoba also help make the offense tick.

How they got here: The Galaxy strung together three wins from three playoff games against Sockers FC, Concorde Fire and a narrow 1-0 win against DC United in the decisive third and final game of the week in Indy. Vardar, the acclaimed Michigan club, also swept past its group of Pateadores, PDA and Crossfire Premier.

Players to Watch: The midfield engine room is LA’s strength with Rey Ortiz and Christian Segovia helping the team dominate the ball. They look to feed double-digit scorers Jorge Ruiz, Dylan Smith and Ethan Zubak. Forward Nash Popovic, who committed to Saint Louis, has 22 goals in 25 games, and he scored three goals in the two games he appeared in at the playoffs.