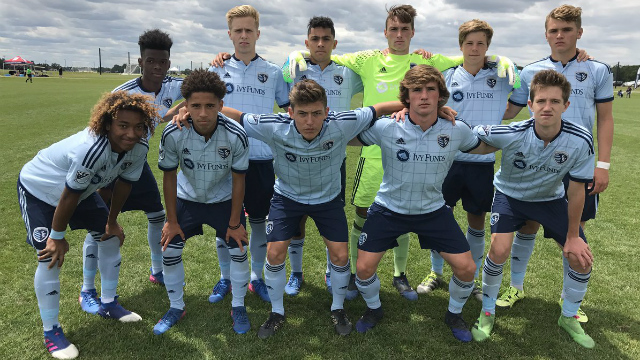 The Development Academy playoffs return on Thursday, as the U16 teams play a quartet of matches around the continent.

The four winners will advance to the semifinals, scheduled for the July 14 weekend in Carson, California.

Here's everything to know about this week's games.

Overview: RSL travels to Children’s Mercy Park for a quarterfinal that kicks off as part of a double header with an MLS regular season match between Philadelphia and the Sporting KC’s first team following. RSL’s U16 side is a high-scoring outfit that went unbeaten in Indiana, finishing 2-0-1 in Group G. Sporting KC progressed after a 2-2 draw against Weston FC on the final day of group play, scoring nine goals while also finishing 2-0-1.

Players to Watch: RSL’s leading scorer, Sebastian Soto, leads the U16 age group with 34 goals. A deadly finisher just about everywhere on the field, he always seems to pop up at the right place at the right time. Defensive midfielder Sammy Tojaga sits in front of the back four, providing a presence that shields the two center backs and allows RSL to throw numbers forward. Shutting down Sporting KC midfielder Gianluca Busio will be one of the primary tasks for RSL, as the North Carolina native is one of the best players despite being born in 2002. Cameron Duke and Colin Innes are also part of a formidable spine.

Overview: Atlanta United’s pristine training facility in Georgia hosts Bethesda SC, and its stout defense will look to spring the upset and punch a ticket to Carson. Bethesda’s back line propelled it to the quarterfinals, winning twice and drawing, while conceding just once in Group D action. The hosts strung together an equally impressive record, winning its final two Group A matches to advance.

Players to Watch: Third in the U16 Development Academy’s scoring charts, Gabe Segal didn’t find the back of the net at all in Indiana. Regardless, his 23 goals in 24 games is impressive, and he contributes regardless of scoring with his ability to hold play up and connect with his teammates. Defenders Jherson Machado, Baraka Kiingi and Ahmed Allen helped Bethesda to its impressive defensive mark. They’ll have their hands full against a dynamic and physical Atlanta attack that was led by Zyen Jones in the group stages. Jones and left back George Bello shared a flank, and were difficult for opposing defenses to slow down.

Overview: Reigning U16 national champions and the age group's No. 1 seed, FC Dallas welcome the Colorado Rapids to Frisco for a clash between Frontier Division rivals. The two sides split the regular season, with the Rapids defeating FC Dallas back in October, and FCD returning the favor earlier this year. FCD was in form from the opening day of play, winning twice and drawing to capture first place in Group F. The battle-tested Rapids were also unbeaten, cruising to a 4-1 victory against Cedar Stars – Monmouth on the final day of group play to win Group B.

Players to Watch: While Brayan Padilla’s strike rate captures the most attention (he’s up to 30 goals on the season after scoring twice in Indiana) FCD is far more than a one man team. Midfielder Thomas Roberts is a dynamic and energetic attacking midfielder that can beat players on the dribble or thread a pass, while winger Edwin Cerrillo is a handful on the flanks. The Rapids have picked up their play in the final stretch of the season, and count on the likes of Oliver Larraz, Samuel Owusu and Stefan DeLeone to make plays for them in the final third.

Overview: One of two Pacific Northwest rivalries in the quarterfinals, Seattle makes the trip up to British Columbia to duke it out in a mini-Cascadia clash. Narrow margin of victories propelled Seattle to the Group H summit, thanks in part to a 1-1 draw against the New York Red Bulls on the final day. The Whitecaps emerged from a difficult group, beating Houston Dynamo and LA Galaxy, two impressive outfits, while falling at the hands of the Philadelphia Union in a 4-3 shootout. Vancouver won two of the three regular season clashes, including a 2-0 victory back in May.

Players to Watch: Forward Jose Hernandez is in form at the right time for Vancouver, as he scored four times in three games in the group stage. Defender Jake Ruby and German Sangha have provided consistency throughout the season, with the latter injecting goals from the team’s midfield. The Sounders are one of three clubs to send both teams through to the quarterfinals, and this U16 group could be the more talented of the two. Midfielder Azriel Gonzalez delivered in the clutch during the group stage, while U14 forward Alfonso Ocampo Chavez played up in Indiana, scoring in the decisive draw with Red Bull.