Day 2 of the U14 Boys National ID Camp ends 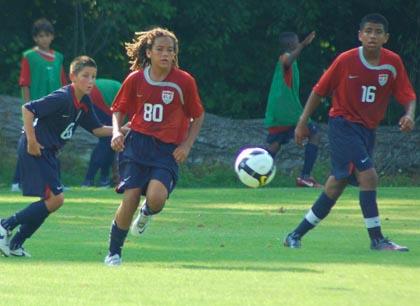 CONCORD, MASSACHUSETTS – Matchday two of the U.S. U14 Boys National ID Camp is complete here at Middlesex Prep School, with another trio of matches completed Tuesday among top 1996 birth year players from around the country.

Everything changes tomorrow as the first pool of 40-45 players will square off against one another as head coach Manny Schellscheidt and his experienced staff begin crystallizing the selection process for this age group. While the staff are quick to emphasize that the pool makeup can change from day to day at this event and for future U14 BNT events during the cycle, there’s no question that the players are here playing to get their name on a list posted at the campus cafeteria Wednesday morning.

Assistant coach Manni Klar said the match and training performances of the players have a way of making most of the pool decisions fairly self-evident. 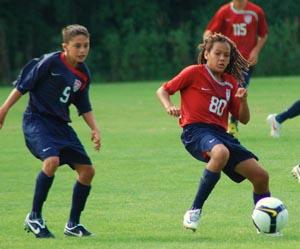 Region III's Arthur Patterson wins the ball Tuesday against Team 5's Trevor Davock (9).
“I think we have a pretty clear idea now. We picked a certain amount last night,” Klar, a veteran German coach with extensive European ties, said. “Tonight when we meet we’ll have a pretty clear idea who is going to be in the pool for tomorrow, but of course then it might change for the next day.”

Klar said his impression of this year’s cast of players has been mainly positive thus far.

“I haven’t seen all of all the games because I have this team (Team 5), but from what I’ve seen the players who are here are trying to really play soccer,” he said.  “In the first half today for instance, Region IV really played well. There are good athletes here but a lot of players are technically strong with really good clean technique, much better than we have seen in the past. They are trying to move the ball around and have good finishing on top of it. Today our group tried to play, and also Region III (their opponents on the day) tried to play very good possession. We ended up watching a very good game. Teams tried to play out of the back and possess the ball, not just shoot it upfield and see what happens.”

Klar pointed to tactics and technique as areas where improvement is needed.

“There’s always room for the tactical part of the game to improve,” he said. “The kids can organize themselves better on the field and manage the game a little bit smarter. The other thing is you can still improve technically.”

Still, Klar agrees that this is one of the better environments to be in for both players and coaches.

“It’s wonderful to work with the kids, because you have very good kids who can also play,” he said. “It’s always good to have the camaraderie we have with the coaches here, and on top of all that it’s a great facility, so it’s always a good event here.”

Following are some match details, observations about players (from me, not from coaches) and lineups for Tuesday’s matches. Keep in mind that with overlapping games, it is not possible to follow each match closely in its entirety. Scroll down for a full camp roster (now including clubs and hometowns).

It was goals galore in this afternoon matchup. New Hampshire Classics’ striker Guyllain Kabala opened the scoring with a good individual effort followed by a close-range finish. Long Island goalkeeper Oliver Roberts was good again coming off his line, but there was no stopping a well-taken penalty kick by Michigan Wolves’ Sam Brown. Springfield, IL, goalkeeper Elijah Brower saved a spot kick on the other end, and then watched as his Region II team went up 2-1 with Nathan Schultz of Ohio's  Ambassadors scoring on a nice pass from Bavarian SC’s Jack Menard. Team Five leveled the score at 2-2 just before halftime when Seacoast United’s Jason Underhill hit a first-time strike on a good cross from Michigan Wolves’ Daegan Dabano.

Eclipse Select defender John Moderwell is a smart defender who tackles well and is good on the ball. The teams scored an equal number of goals in the 2nd half for a 4-4 draw.

One field over, U.S. Youth Soccer ODP Regional teams from the east and west duplicated the eight-goal flurry from the first game. This game was a bit quirky however. In the opening half, Region IV thoroughly dominated. Redwood City Juventus midfielder Danya Kafai scored a pair of goals, with FC Barcelona forward Oscar Martinez adding a lovely overhead volley and West Coast FC’s Andonis Amaya adding another for a 4-0 halftime lead by the Westerners. Eugene, Oregon’s Rolando Velazquez was dangerous with his crossing and San Diego Surf midfielder Corey Baird was a good facilitator in the middle.

I didn’t see the 2nd half but it must have been a complete turnaround for the new cast of characters (most players here play just one 30-minute half per day) as Region I not only tied the match at 4-4 but had a potential game-winner ruled out in the final minute for offside.

FC Dallas attacking midfielder Emerson Hyndman, back for his third visit to this camp but the first playing with his own age group, was active in the 1st half, darting to and fro on the ball and hitting some very useful passes for his team. Hyndman, who had a good camp with the U15 Boys National Team last week in New Jersey, didn’t quite manage to pull the strings on a goal of his own, but started a move from which New England Eagles forward Trevor Davock completed a nice rebound finish for a 1-0 lead for Team Six. Santa Barbara SC’s John Requejo doubled the lead with a good finish later in the half. Tampa-area midfielder Omar Castro scored a rebound goal in the 2nd half for the final scoreline of 2-1.

CASL fullback Michael Clemmons had a very strong game, showing a good first touch, accurate passing and the ability to mark and win balls in defense.