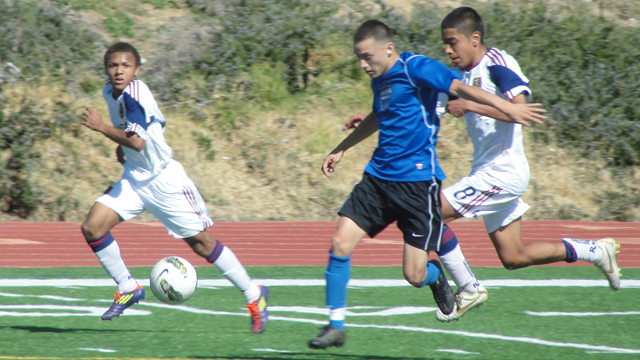 Real Salt Lake Arizona is back on top.

After residing in the third spot in the division standings for much of the year, RSL-AZ U18 used a six-point weekend to jump past LA Galaxy and Chivas USA and reclaim the top spot in the SoCal Division.

Both of RSL-AZ U18’s victories came against LA Galaxy, as the residential MLS academy swept the star-studded team from Los Angeles over the weekend. 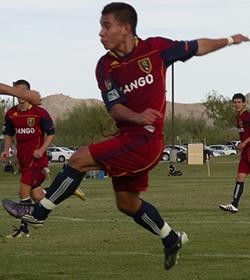 In Saturday’s opener, Maikon Orrellana scored twice and Jordan Allen added the insurance goal in a 3-1 win for RSL-AZ. Orrellana leads the club in scoring with 13 goals on the season.

Jean-Pierre Bello’s hat trick on Sunday helped RSL-AZ to a comfortable 4-1 victory. It was the first three goals of the season for the Colombian in only his fifth start for the club.

After a slow start to the season, RSL-AZ has won eight of its last ten games to grab a one-point lead over Chivas USA at the top of the division standings.

LA Galaxy U16 was more convincing in the trip to the desert with four points in two games. Rolando Munoz, Angel Josue Espana, and Justin Dhillon scored on Saturday in a 3-0 win for Galaxy. The two teams battled to a 2-2 draw on Sunday.

RSL-AZ U16 still holds the top spot in the division, but LA Galaxy is only one point back with two games in hand.

Tyler Davis scored with only two minutes left on the clock and Sockers FC U18 topped Crew Soccer Academy Wolves 1-0 on Saturday. It was Davis’ second goal of the season.

Sunday was not as kind to the Sockers. Vardar SC Freiburg skated its way to a 3-1 victory and jumped level on points with the Chicago club for the second spot in Great Lakes Division.

Divisional leaders Chicago Fire U18 enjoyed a four-point weekend that started with a 3-0 win over Internationals. Supersub Joseph Calisti scored twice in the second half to bring his season tally to 10 in only two starts and 12 appearances. Chisom Ogbonna scored the other goal for Fire.

The Fire also tops the division in the U16 age group, and the younger squad had a six-point weekend with a pair of shutout victories.

Luca Giovine and an own goal pushed Fire to a 2-0 result over Internationals on Saturday. Jeffrey Farina, Christian Henock-Berhanu, and Anthony Smith scored for Fire in a 3-0 win over Indiana United Fire Academy.

In the Frontier Division, Colorado Rapids U18 cruised past Colorado Rush 6-2 on Friday to keep the top spot in the standings.

Alan Winn scored four goals in 53 minutes on Saturday, as Solar Chelsea SC U16 beat Classics Elite 6-0 in a Texas Division matchup. In the U18 game, William Webb scored twice and Zachary Mathers, Alfred Koroma, and Adam Bonville all added a goal a piece in a 5-2 win for Solar Chelsea SC.

Solar remains in second place in both age groups for the division with a handful of games left on the schedule.

Jesse Chan picked the right time to score his first goal of the season. Two minutes into stoppage time in the second half, Chan found the back of the net for Met Oval U18’s game-tying goal against Seacoast United on Saturday. Andre Simmond scored earlier in the second half for Seacoast.

Met Oval did not have any of those heroics on Sunday, as Empire United rolled past Met Oval 3-0. Stefanos Stamoulacatos, Anthony Rozzano, and Liam Callahan scored in the victory for Empire.

In an eventful match on Saturday, Potomac U18 drew New England Revolution 2-2 thanks to a late goal from Potomac’s Philip Breno. Three red cards between the two teams also punctuated the match.

On Sunday, Baltimore Bays Chelsea U18 continued its torrid run since the start of March with a 6-1 win over New England Revolution. Both Christian Morales and Malcolm Harris scored twice in the lopsided victory. Michael Gamble and Yaw Amankwa also scored for the Bays.

Conor Nichols scored twice in a 5-1 win for NJSA U16 over Matchfit Chelsea on Saturday. Nichols is now on eight goals in 14 games this season.

North Carolina Fusion U18 got back to its winning ways on Saturday with a 3-1 win over North Meck SC. Hassan Kouyateh, Warren Marshall, and Brandt Bronico scored for Fusion, as the team finished April with three wins in four games.

The U16 game between the two clubs ended in a 1-1 draw. It was the first dropped points in division play this season for CASL. Evan Deycaza scored in the last minute of the game to claim a point for CASL.

With a 1-0 win over San Jose Earthquakes on Saturday, De Anza Force is in place to clinch its spot in the playoffs with a win or draw over Cal Odyssey in its final regular season game on May 12.

In the U16 game, Earthquakes had no answer for Jason Romero and the striker netted four goals in a 5-3 victory for De Anza Force.

Down the coast, Pateadores’ 0-0 draw with Arsenal on Saturday may have ended the postseason ambitions for the defending champions. Pats lost nearly every player from that title team, but had been in good form lately with three wins in the last four games. It has just been too little, too late for the Pats.

The same story is true for Pateadores U16, which was held to a 1-1 draw against Arsenal. Anthony Rodriguez scored for Arsenal, and Nahum Paz found the back of the net for Pats.  The draw puts Pateadores out of contention for one of the top two spots in the SoCal Division.

TopDrawerSoccer.com Team of the Week: