After 10 long months of work, training and games, and a weeklong experience under the sun in Frisco, Texas, eight teams remain alive for national title honors in the Development Academy U16 age group.

Here’s an in depth look at the eight teams competing for honors this week in Houston:

There are no average teams at this stage of the season, and while it’s hard to know what team might have the most talent, this Red Bulls side makes a strong argument from back to front.

Offensively, the team can strike from anywhere on the field – there are forwards Alex Muyl (committed to Georgetown) and Ismar Tandir, with 25 goals between them up front, while Amando Moreno and Adam Najem (committed to Akron) supplied 20 from the midfield. 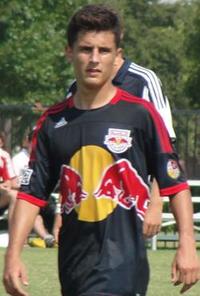 That’s without even mentioning Arun Basuljevic, a central midfielder who helps the team dictate the rhythm and possession in the side. And what makes the Red Bulls even more lethal this week is the addition of four players from the U.S. U17 MNT – Wesley Wade, Evan Louro, Kevin Politz and Christopher Lema are all eligible and expected to be included.

The team is ready for the challenge.

“I am excited. I can't wait,” Muyl told TopDrawerSoccer.com. “I think we have a really strong squad, deepest in the nation. Hopefully, when we go there we will come out as strong as we did [in Frisco]."

How they got here: The Red Bulls swept past the competition at the Academy Playoffs, beating FC Dallas (2-1), Georgia United (2-0) and CASL Chelsea FC (3-0).

Player to Watch: Offensively, the team can hit you from just about anywhere on the field, and the addition of Wade is going to only make New York more dangerous up front. But it’s Alex Muyl, the team’s leading scorer, who could wrap up his season in strong fashion.

The sole U16 club from Southern California at Finals Week, Pateadores have progressed this by being a very difficult team to beat.

Having not lost a game since April, Pats feature one of the top scorers in the age group in Brian Pacheco, who has bagged 21 goals in 26 games this year. Also adding an edge has been Kevin de la Torre, a UCLA-bound midfielder who came over from Chivas USA before this season began.

It’s going to take a complete effort from this squad in order to emerge on top in a difficult group, however, and Pacheco and de la Torre must lead the way in Houston.

How they got here: After opening with a 3-3 draw against the Dallas Texans, Pateadores beat New Enlgand 3-0 and then Albertson 3-2 to capture the group.

Player to Watch: Goals win games, and that makes Brian Pacheco the most important player for this squad at Finals Week.

The team is the star mantra is one that aptly describes this Charlotte side, as it’s truly a collective effort that has taken them to Finals Week.

The spine of the team is what really sets the tone for this tough, defensively strong group, with center backs Remington Frost and Jared Kent giving them strength and size at the back, midfield industry provided by Eduardo Iturbide, and Hans Honer poaching goals up top.

Adding a boost and a pair of fresh legs is the inclusion of U16 eligible center back Jared Odenbeck. The Georgetown-bound defender played up with the U18s most of the year and will improve the defensive depth in Houston as Charlotte looks to spring an upset.

How they got here: With an efficient performance at the Playoffs, Charlotte secured the top spot in its group on goal differential with a pair of wins over South Carolina Battery (3-1) and FC Greater Boston (2-0), with a 0-0 draw against a very good Whitecaps team between.

Player to Watch: Charlotte knows how to keep the ball out of their own net, but they’ll need a player like Hans Honer to step up and provide enough goals to win those games.

With just one loss in Development Academy play since the end of March, and riding a ten-game unbeaten streak into Finals Week, it’s safe to say that this Fire group is a team hitting its stride at just the right time.

Goal-scorers Marcus Epps and Jeff Farina are the team’s two main offensive contributors, and the pair combined for all nine goals at the Academy Playoffs (Epps with four, Farina with five).

And while a big week from that pair is critical, they’re certainly not alone atop the talent heap. U15 BNT midfielder Collin Fernandez is playing up on this side and injects a creative spark into the middle, while Kyle Dal Santo is solid shot-stopper.

How they got here: Three wins in three games brought the Fire to Finals Week. After opening the Academy Playoffs with a 4-2 win over Clearwater Chargers, wins over Seattle Sounders (3-0) and Real Salt Lake (2-1) won the group.

Player to Watch: Farina is a big part of this team’s offense, but Marcus Epps’ ability to stretch defenses was a huge factor in winning at Frisco. He’ll need to be even bigger in Houston if Chicago can tackle MLS rivals New York.

There's no doubt that any of these four teams are capable of winning the group -- the clear favorites heading into this week are the New York Red Bulls. As long as the U17 MNT players fit in smooth eneough, the Red Bulls should just beat out the Fire for the top spot.

While on paper, Crew Soccer Academy Wolves might not possess the talent and depth other teams have at Finals Week, they can’t be counted out.

One of the reasons for that is Ahinga Selemani, starting forward on the U.S. U17 MNT. Providing compliment to Selemani in the attack is Ali Jawad and Yamann Salool, while Matt Habrowski provides a stable option at the back and Oliver Harris helps keep things tidy in midfield.

How they got here: After a second place finish in the Great Lakes Division, Crew Soccer Academy beat NJSA 04 (2-0) and Texans SC (1-0) and drew 2-2 with Shattuck-Saint Mary’s to win its playoff group.

Player to Watch: Selemani is the big name for the Crew’s attack, but they’ll be far from over-reliant on a player who spent most of his season away from the team. Matthew Habrowski, a member of the U18 player pool, needs to be rock-solid at the back in order for the Wolves to have a good three games.

After a rough start to the later portion of the season – going 1-5-1 in its first games in 2012 – D.C. United bounced back, and have put together a nice run, doing just enough at the Academy Playoffs to win their group and progress.

One of the brightest spots at Finals Week was the play of Jorge Calix, an attacking midfielder who spent most of last year at the U17 Residency program in Florida. He gives the United attack some flair on the outside, with midfielder Ian Harkes pulling the strings in the middle, and Suliaman Dainkeh providing steel at the back.

The opening match of Finals Week against Crew Soccer Academy Wolves could end up deciding which team ends up winning this group.

How they got here: After winning the Mid-Atlantic Division, D.C. knocked off Concorde Fire (3-1) and Colorado Rush (4-2) with a 1-1 tie against LA Galaxy sandwiched in between at the playoffs.

Player to Watch: D.C. has many dangerous weapons available on offense, but Jorge Calix demonstrated his ability to provide a game-changing moment – plus he’s had more time to adjust to the team and fit in extremely well at the playoffs.

Like their Mid-Atlantic Division counterparts D.C. United, it was a slow start to the 2012 schedule for the PA Classics. And just like D.C., they caught fire at the right time, going unbeaten in the last eight games of the regular season to make it to the playoffs.

Joseph Julius and Connor Maloney have supplied the goals this year, while Andrew Skundrich has excelled in a holding midfield spot, and Bryce Cregan is coming into the Finals Week of a very good year.

The team is no stranger to this stage of the season, as a handful of the players on the current roster progressed to Finals Week last year, and the experience should be useful this time around.

How they got here: Three extremely close results at the Academy Playoffs secured PA Classics’ spot at Finals Week. After a 2-1 win against Arsenal FC, PA Classics came from behind twice to draw 2-2 against Weston FC, and eked out a 1-0 win against Chicago Magic to go unbeaten.

Player to Watch: Two players have driven the offense this year, and Connor Maloney, who is verbally committed to Penn State, has pace and power to get behind defenses and put goals in the back of the net.

Emerging on top of the Frontier Division is no simple task – the miles logged by each team is significant, and Scott Gallagher’s Missouri club clinched first place thanks in part to being able to win on the road.

The team is buoyed by a number of solid role players who do their job well – Tommy Barlow and Austin Panchot both chipped in ten goals, while Nick Jones supplied seven up front. Goalkeeper Jacob Leeker did a solid job between the posts, and they’ll look to put it all together one more time down in Houston.

How they got here: The team overcame a 2-2 draw on the opening day of the Academy playoffs against Solar Chelsea, winning a pair of one-goal games against San Diego Surf (2-1) and PDA (1-0) to advance.

Player to Watch: What the team lacks in blue chip talent it makes up for with hard work and clutch scoring. Forward Nick Jones, who is verbally committed to Wisconsin, is one of those who can provide in the big moment, and that’s just what his team requires in Houston.

This quartet is a difficult one to project. But D.C. United showed at the Academy Playoffs that if they execute their game plan and come out to play in all three games, they have the talent to win the group to set up an all-MLS title game.