The rivalry between Portland and Seattle has finally reached the youth level.

The two Northwest clubs, which have battled at the professional level for decades, are both in the USSF Development Academy this season and set to meet for the first time on Saturday.

Timbers, which are in their first season in the Academy, opened the season two weeks ago with a pair of defeats at the U18 level in the trip to Los Angeles for games against Chivas USA and LA Galaxy. The Oregon club will be helped by the return of winger Lucas Cawley to the roster after missing out on the trip to California. The dynamic midfielder had a number of assists for RSL-AZ last season. 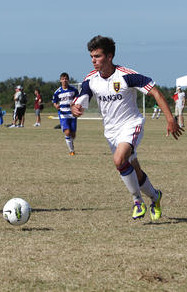 Lucas Cawley will play for
Portland Timbers this season.

In the younger age, the Timbers U16 fared slightly better with a pair of draws from the trip. Forward Reid Baez leads the squad in scoring with two goals in two games.

Sounders U18 will be helped by the return of U.S. U18 Men’s National Team defender Jalen Markey to the lineup. The Syracuse-bound center back is the leader of the Rave Green youngsters on the field. Head coach Richard McCormick will be counting on Markey to solidify a defense that let in seven goals in the first two games of the season.

Saturday’s game is the first of two meetings this season between the clubs. The Sounders travel to Portland in June for the return fixture.

The undefeated Strikers FC U18 squad faces off against San Diego Surf on Saturday. Dominant forward Paul Salcedo Borrego, who has three goals on the season, and a defense that has not conceded a goal are the highlights for the Strikers. Surf midfielder Brian Iloski is off to a fast start this year with two goals in two games.

In the desert, Real Salt Lake-Arizona welcomes fellow residency program Vancouver Whitecaps to Grande Sports World for a fixture on Saturday. RSL-AZ started the year with wins in both age groups over San Juan Soccer Club last weekend. Virginia commit Riggs Lennon and Marquette commit Jose Navarro each scored twice for the U18 squad last week. Lennon, in his first season in the Academy, is already leaving an impression on the opposition.

Back on the coast, Santa Cruz Breakers takes on De Anza Force on Saturday in a Northwest Division showdown. Force should enjoy the return of UCLA commit Michael Amick to the defense. Amick was with the U.S. U18 MNT for the past few weeks.

The Texans have one of the top forwards in the country in Emmanuel Usen, who scored three goals in the first game of the season. The speedy Usen will be a handful for the Colorado club.

Colorado Rapids also makes the trip to Texas this weekend with games against Lonestar SC and Classics Elite. This is the first weekend of action for the MLS Academy.

In the Mid-America Division, Chicago Fire joins the action with games against Ohio clubs Internationals and Crew Soccer Academy. Recent Kentucky commit Alex Bumpus will be looking to lead the Crew U18 to their first win of the season.

The top two teams in the Atlantic Division U16 bracket take the field on Saturday when D.C. United takes on PA Classics. Young, rising star Christian Pulisic, leads the Union affiliate with three goals on the season. The winger just turned 14 years old this week.

In the Northeast Division, Seacoast United takes on Met Oval on Sunday. This is the first weekend of action for Met Oval. Seacoast split its opening games against BW Gottschee with the U16 side claiming the win for the New Hampshire club.

On the opposite end of the coast, the Georgia clubs, Concorde Fire and Georgia United, host Chargers Soccer Club and IMG. This is the first weekend of games for all four clubs. Concorde Fire has a number of promising prospects, but Duke commit Cameron Moseley led the U16 squad in scoring last year with 21 goals in 22 games.