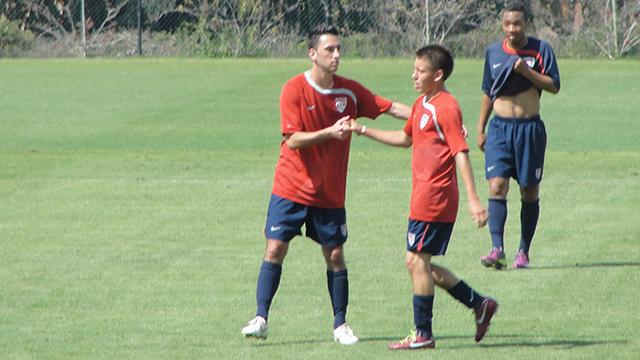 CARSON, Calif. – Two second half goals from Dillon Serna propelled the red team to a 2-1 victory over the blue team in the U18 Men’s National Team intrasquad scrimmage on Wednesday at the Home Depot Center.

Chicago Fire Academy’s Andrew Oliver found the back of the net in the first half for the blue team, when he was deftly sent past the defense by an excellent pass from Indiana Fire United’s Travis Wannemuehler. Oliver rounded the keeper and scored into the empty net for the blue team in the 30th minute.

The blue team dictated much of the play in the opening half thanks to pressure from the attacking trio on the red team’s defense. Yet, the goal-scoring opportunities were limited for both sides in the first 45 minutes. 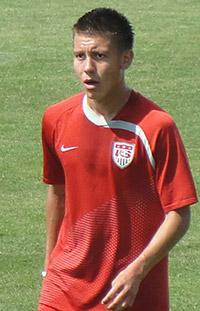 The second half offered new faces, and one in particular brought some life to the proceedings.

“I didn’t start the game, so my job was to bring energy and work hard,” Serna told TopDrawerSoccer.com “We were down 1-0, so we had to comeback. I ended up scoring, so it feels good.”

Serna’s first goal came in the 60th minute when he picked off a pass about 22 yards from goal with no defenders in front of him.

Eight minutes later, Serna grabbed the game-winner on a slick exchange with Alejandro Guido. The Rapids Academy player received a through ball from Guido, as he raced past the defense. With a defender on his hip, Serna decided to cutback inside the six-yard box.

“Oh man, that was a little more work,” Serna said with a smile. “I saw the defender slide, and I was going to play it back but the keeper came out so the near post was open.”

In a spinning move that would make a ballerina proud, Serna’s cutback turned into a screwdriver kick that nestled inside the near post for the game-winner.

Overall, the midfielder thought the play was solid from the group after only a few days of training.

“We have only been here a few days, but I think we are starting to get it and understand what the coaches are asking for.”

Serna’s quality was evident from the moment he stepped on the field, and he attributed that to training with the Rapids professional team.

“Since I got back from residency, I haven’t been training with the academy,” Serna said. “I wanted to keep my level up, and with the first team it does a good job with that.”

The midfielder is playing left back and left mid with the first team; he said that he prefers a spot in the midfield. As for the next step for Serna, he is committed to Akron in the fall, which should be a reunion of sorts from the last U17 World Cup team.

“A few guys from residency are going there, so I am looking forward to it.”