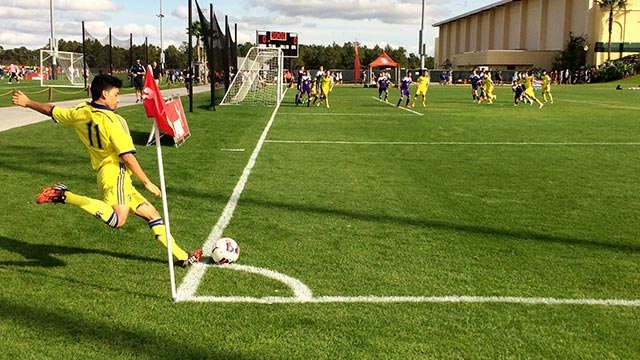 The annual Disney Soccer Showcase has kicked off at ESPN’s Wide World of Sports. The men’s groups finished their helpings of holiday ham a few days ago and kicked it into action today.

Sporting KC Academy was outplayed, but in the end it was their magic touch near the Magic Kingdom that allowed them to walk away with the win over Loudoun 99 Red. They tallied one goal and got a splendid performance from goalkeeper Alex Brown to take the first game of the tournament.

“We got in late last night and I that kind of showed a little bit today,” said Jon Parry, head coach of Sporting KC Academy. “We ended up scoring a nice goal … Our goalkeeper made some really good saves on them. It was good to get the win though.”

Loudoun saw the first few chances of the game but couldn’t quite capitalize on any of them. Rohit Chhatre got the first chance of the game in the 20th minute as he slipped the ball past Brown on the challenge, but he didn’t get enough of a foot on it and it was cleared away before it reached the goal line. Three minutes later, Adam Melendez fed a cross through the box that was whiffed by a teammate. Loudon would have four more chances before Sporting KC was able to shake off the late night arrival and start playing their game, including tries deep in the box that were stopped by a diving Brown. One was from the foot of Bryan Silver and the other from Zachary Hossenian.

Colin Innes broke the tie in the 50th minute when he received a pass from John Klein and stuffed it into the bottom right on Sporting’s first chance of the game. Nine minutes later Jacob Hall almost put Sporting up by two when he chested a ball toward the net and off the keepers mitts.

Melendez had the last chance of the game, almost tied it up, in the 69th minute when he dribbled through three defenders and put a ball off the keeper’s fingertips that tip toed the line and stayed out of the net.

SC Del Sol started slow out of the gate, but got used to Florida’s humidity and knocked four goals in during the second half to run away to a 5-2 win over Orlando City’s U17 team.

“It took us awhile to get going because of the humidity. We just weren’t used to the humidity,” said Anthony Colavecchia, head coach of SC Del Sol. “Getting acclimatized to this kind of humidity affects the way that you play. Coming from the west coast, where it’s dry heat, is a completely different kind of game.”

Wyatt Dial got things started for SC Del Sol in the 26th minute. Orlando City’s goalkeeper, Hector Diaz, misplayed a long shot off the foot of Del Sol’s midfielder, Davis Peck, and Dial was there to pick up the trash.

Jacob Acevedo, Orlando City midfielder, put his team on the board in the 46th minute. He made it 1-1 when he received a free kick from David McBroom and found the back of the net with his head for the score.

Del Sol didn’t waste any time as they notched another tally three minutes later to get back in front. Garrett Hooker got the goal as he slithered his way through the defense and rocketed a shot to the top right of the net.

Del Sol got two quick goals, two minutes apart, to put the game out of reach for Orlando City. The former came in the 78th minute when Joseph Penney dribbled the ball around four Orlando City players and let a shot go that was blocked by defender Cedric Pereira. Dial got the rebound and netted his second goal of the game. The latter made it 4-1 in the 80th minute when Thomas McCormack used his fancy footwork to find himself alone and stuff the ball into the bottom right corner of the net.

Ignacio Serrano tried to ignite his team when he put in a tally that closed the lead to 4-2, but it wasn’t enough. Sean Holland capped the victory for Del Sol during stoppage time to make it 5-2.

Chelsea came out strong and they upset Braddock Road YC Elite, 3-1. Both teams played a midfield match, but things worked out better for Chelsea.

“We worked hard, defended well, didn’t counter like we normally do, but worked hard,” said Ben Parks, head coach of Southern SA Chelsea U16. “Capitalizing on the break, that’s what we do better than most teams and we didn’t do that well today.”

Although Chelsea notched the first goal, Braddock Road saw the first chance of the game in the third minute when Karim Azero fed Ethan Lloyd, but the chance was stopped at the hands of the keeper. Chelsea’s Nathan Robertson had a bottom right finish in the 12th minute on their first shot.

Braddock’s Harrison Mazanec made it a 1-1 game in the 15th minute. Lloyd was at the center again, this time he took a free kick from inside the corner that found the foot of Mazanec, who tapped it in.

The back and forth play did not stop there. In the 22nd minute, Luis Chavez sent a long pass to Aldair Cortez who got behind everyone. Cortez chipped it over the challenging keeper to put Chelsea ahead 2-1.

The teams exchanged chances throughout the remainder of the match, but Chelsea was the only one to find the back of the net again. They did so in the 68th minute on a shot from Reyes Hernandez. The keeper slid into the net to make the save but slid a bit too far and crossed the goal line to give Hernandez the last marker of the match.

The game was a stalemate mate with neither teams giving an inch, but Orlando City pulled away, and pulled out the victory in the second half of the game. Orlando City subbed about half of their squad at halftime and the fresh legs allowed them to take a 3-1 win. The first half was all Solar Chelsea, but they couldn’t crack the code of the keeper. Justin Bauer, Orlando City’s goalkeeper, made stop after stop to keep Orlando City in the game.

“They [Solar Chelsea] play very well. They’ve got a very good culture,” said Jeff Negalha, head coach of Orlando City. “We weathered the storm early on. They had some very good opportunities. Once we settled in we did well.”

Orlando City was the first team to find the back of the net when Bryce Willis crossed the ball to Alejandro Pereira, who found space in the bottom left, in the 44th minute. Mario Licor ended up tallying the eventual game winner just four minutes later on a pass from Jacob Garzon.

Solar Chelsea had some fight left in them, though. They closed the gap to 2-1 in the 54th minute. When Dwight Williams Jr. sprinted past everyone on the field, drew the goalie toward him on the goal line and dished it back to Javier Leija for the open netter.

Solar Chelsea had three late corner kicks and a ball off the bar, but couldn’t tie the game. Orlando City took advantage of Solar Chelsea’s misfortunes in the 69th minute when Licor picked up his second goal of the game.