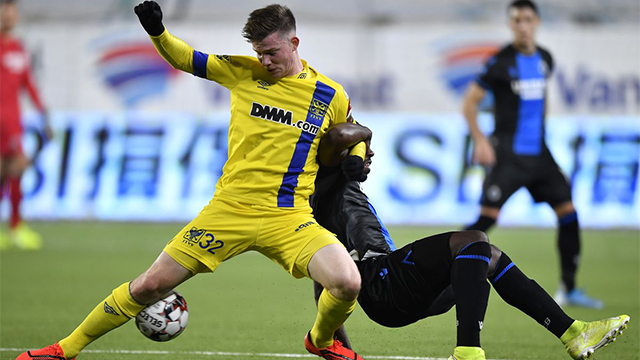 Nowadays, uncertainty lingers when it comes to soccer at just about any level.

That was especially true for U.S. youth national team player Chris Durkin, up until last week.

Having spent the past season on loan at Sint Truiden, a small club in the east of Belgium, he has been waiting the past few weeks to see if that move would become permanent.

Eventually, D.C. United, Major League Soccer and the Belgian club agreed a fee and sorted out the details on a permanent deal. Last week confirmation came that he would stay with the club.

“I’m really, really excited about it,” Durkin told TopDrawerSoccer in a phone interview this week. “I worked really hard to get to this point and I just feel really free now.”

The transfer comes at the end of a season where Durkin played 14 games while on loan with the club. Part of the U.S. Under-20 World Cup squad last summer, the opportunity was presented to him to play on loan with Sint Truiden starting in August.

That in itself was a big challenge for the youngster, as he joined up with the team with the start of the season around the corner.

“It was interesting just because I wasn’t able to experience a preseason with them initially,” Durkin said. “So I had to kind of stay on my toes, make sure that I asked a lot of questions to the coach. The level, it was definitely different, there were some more younger guys on this team [and] I’m pretty close to some of those guys now.”

Durkin said he did research on the club and looked at everything about it, including its history and supporters, before making the move. Located near the border between Belgium and the Netherlands, Durkin’s swapped the hectic, traffic-dense D.C. region for a small town with a population of just over 40,000. Staaienveld, the club’s stadium, holds just 14,000, smaller than Audi Field in the nation’s capital.

Down-sizing has suited him.

“I can drive to practice in two minutes or take my bike,” he said. “When I go to the games I actually walk to the stadium. It’s all really, really small. The type of personality that I have, I think I fit more with where I’m at now and the relaxed lifestyle. I really get to focus on football, and that’s exactly what I want right now for my development.”

At first, playing time was sporadic for the midfielder; he didn’t make his debut in the Belgian League until November 30, entering as a substitute with just a few minutes left in a game against Genk. After a handful of starts, Miloš Kostić took over as head coach. He handed Durkin more chances, as he played in eight games from January through March, when the season was suspended and eventually shut down.

One of the biggest challenges was trying not to put too much pressure on himself. Playing on loan, he knew he had the chance to take this opportunity to make the move permanent. That admittedly taxed him at times this season, and he’s eager to hit the ground running when he returns to Belgium – pandemic permitting – in June.

“I think this was a really important time for me to prove the player I am,” he said. “I don’t think I even showed them the player I am due to the stress I [was] under and maybe I mentally hindered my performances sometimes. Now that the deal is done, and they saw the potential I have, now I can really go out there full, no weight on my shoulders.”

Like every other player around the world, the season came to a premature end for Durkin. One game was left before playoffs started when the season shuttered in Belgium. It likely won’t resume until the fall (at least). During his time in lockdown, Durkin did his best to pass the time, staying fit and waiting to hear what his future might hold.

The fact that the team showed enough faith in him to finish the transfer during a global pandemic was icing on the cake for him. It’s something that he’s eager to repay to them once soccer resumes.

“I feel really, really thankful to them for getting this across the line,” he said. “They’ve been really professional; they’ve been helping us and all the rest of the players through this.”

After receiving word about the deal, Durkin bought a ticket and flew home the next day. Expected to return to Belgium in June, he’s looking to stay as sharp as he can. Whenever soccer returns to something resembling normalcy, Durkin has a clear goal in mind as he eyes the next step in his career.

“I want to really have a great preseason and be involved right away and start within the team,” he said. “I know I have the ability to do that and slowly start to chug away and really try to get my first actual professional entire season under my belt. I’ve had a good number of minutes here, a good amount of minutes there, but never a full season. And that’s what I really want to get accustomed to and push for. I think that’ll be great for me at the age of 20, 21 to get that under my belt in the Belgian league, and just keep pushing forward.”