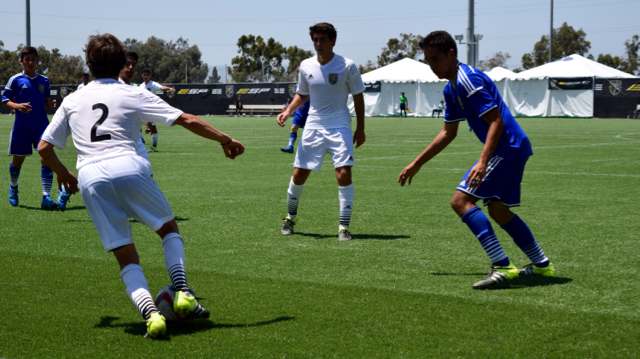 CARSON, California - The 2015 Generation adidas ESP Event kicked off on Tuesday at the Stubhub Center in Carson, California. The ESP event is a gathering of some of the best players from MLS academy teams - broken down into a regions: West, Central, and East. Bayern Munch (2001) was the other team invited to the event.

The opening half of the game was a scoreless affair after neither side could find the opener in the first 35 minutes. Central had the better looks with FC Dallas’ Daniel Evans having two chances before the halftime whistle.

The speedy FC Dallas winger had the first look in the ninth minute when he broke through the backline and tried to one-touch his finish on a bouncy ball over the goalkeeper. Evans’ shot went wide of the mark.

Houston Dynamo’s Johnathon Diaz supplied the chance in the 26th minute for Evans. Diaz’s service was in the path of Evans run, but his shot went over the bar this time.

Chicago Fire teammates Victor Bezerra and Christian Marquez linked up in the 30th minute for a chance. Bezerra played the ball into Marquez for a chance near the corner of the 18-yard box, but the Bayern Munich goalkeeper made a great save to keep it out of the net.

The last chance of the first half was the best for Central. Aaron Martinez put a perfect service for Diaz to head home, but his header was wide of the post.

Central continued its onslaught on the Bayern Munich goal in the opening minutes of the second half. Berea put a long-range effort on target, but the Munich goalkeeper turned it away.

Jaylin Lindsey set up a golden chance in the 49th minute when he raced down the right touch line before whipping in a service to the far post. No Central attacker could get a toe on it to steer the cross home.

In the 59th minute, Central took the lead. Lindsey headed in a corner kick from Martinez.

Munich answered with the equalizer four minutes afterward when the Central defense lost its shape and Bayern exploited some space near the top of the 18-yard box. The midfielder slipped in a pass for the striker to finish.

Lindsey had a chance with six minutes left to retake the lead when he combined with a couple of players down the right side, but he his shot went wide of the goal.

Bayern Munich returns to the field on Thursday for a game against East. Central meets up with West on Thursday.

The East dominated the West from the opening whistle on Tuesday. The East midfield trio of Mathieu Choiniere, Isaac Angking, and Ballou Tabla were too much for West and it was fairly obvious from the start.

Angking pounced on a bad pass from a West midfielder in the fourth minute, which put the West team in a bad position. One of the West center backs took down Angking in the box, which led to a penalty kick. Impact prospect Tabla tucked the shot into the corner of the net for the opening goal.

East continued to pressure West in the defensive third and nearly doubled the advantage in the seventh minute. Juan Esteban Grisales stole the ball from a West defender and then quickly played it to center forward Shaan Hundai. The West defenders did well to knock Hundai off balance and keep the Toronto FC player from getting much on his shot. Goalkeeper Zachary Nelson easily saved the weak shot.

Hundai had another attempt in the 19th minute when Omir Fernandez’s perfectly timed through ball found the run of the forward. Hundai tried to tuck his shot to the far post, but he kept it too close to the keeper and Nelson did well to keep it out of the net.

One minute later, East found the back of the net for the second time on the day. Fernandez put the shot away on a goofy finish after Luke Campbell (D.C. United) played in Hundai inside the 18-yard box. Hundai hit a driven ball toward the near post that Fernandez directed into the goal.

West could not break the pressure and nearly went down by three moments later. Nelson’s careless pass found the feet of Choiniere inside 12 yards from goal. The Impact Academy player hit it right back to Nelson, who made a good save to keep it out of the goal.

Choiniere was involved in the third goal though. He just had to wait until the 29th minute for his time to shine. Choiniere picked off a pass in the midfield and then played a great through ball to Fernandez who tucked it past Nelson and into the net.

Hundai and Fernandez both had opportunities before the halftime whistle to stretch the lead to four, but neither could put it away and the East took a three-goal lead to the shade at half.

West tried to put some pressure on the East in the second half, but never amounted to many serious chances to trouble Trey Miller’s goal. The best chance came from Orlando Lopez (Chivas USA) who hit a shot from 20 yards out that smacked the crossbar. The rebound fell kindly to Miles Stray, but he was held off the ball by a tug from an East defender.

With 11 minutes left, East capped off the game when Justinian McMaster raced past the defense and passed the ball into the net. McMaster’s goal gave the East a 4-0 win from the opening tilt.