In an effort to continue improving girls player development, the Elite Clubs National League organizes camps for its Player Development Program (PDP) in different corners of the country in order to provide opportunity for the best players to go up against each other more often. 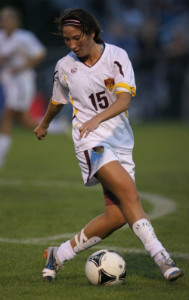 With that in mind, this upcoming weekend marks the Detroit Player Development Program camp, as players from the Midwest - clubs including Michigan Hawks, Sockers FC, Ohio Elite and Carmel United to name a few - will descend on Michigan and scrimmage against each other for a couple of days.

The purpose of the event, according to the ECNL website is to "provide an opportunity for the top players within every ECNL Conference to play with and against the best players within their region at multiple age groups, attend presentations from leading coaches and experts regarding elite athlete development, and be recognized and rewarded for their ability and performance."

The roster, announced on Monday, includes several of the best players from the region split into four different teams. Here's a look at who will be in attendance: