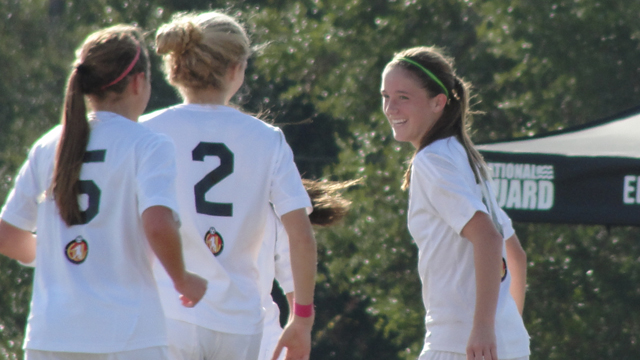 SANFORD, Florida – Ideal weather, fast fields, and top talent set up the perfect storm for goals at the Elite Clubs National League’s second showcase event of the season, and the attackers did not disappoint.

A bevy of teams were on point in front of the net, as goal scorers seemed to be the ones making most of the noise from the first day of the event. The sunny skies are supposed to give way to a rainy Saturday, so the defense may have something to rally around this weekend.

No McCoy, No problem

The TopDrawerSoccer.com IMG Academy Girls Class of 2015 top player Kayla McCoy is out with an ACL injury, but it did not slow down her Eclipse Select SC U16 team against Ohio Elect Soccer Academy on Friday. 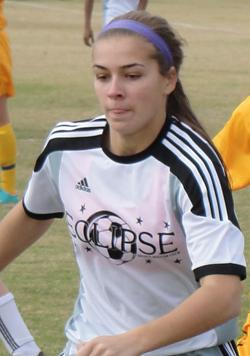 Chicago-area club Eclipse used two goals from Riley Sykes to steam past Ohio 6-0. Despite the lopsided score, Eclipse head coach Mike Nesci said the game came down to one moment.

“Really the moment of the game was the missed penalty,” Nesci told TopDrawerSoccer.com. “We weren’t matching them physically in the first half and they gained that penalty.”

Ohio Elite missed the target on the penalty kick, which would have tied the game at 1-1 midway through the first half.

Dames said his squad matched Ohio in the second half, which led to the five goals in the last 28 minutes of the game. Karly Stuenkel, Elizabeth Woerner, Maya Neal, and Hannah Mussallem joined Sykes on the score sheet.

Eclipse and sits at the top of the Midwest Conference despite the absence of McCoy who has been out all season.

“[McCoy] is obviously a huge part of the team and makes a big difference,” Nesci said. “But it has been good for some of the other players because they have really been able to find themselves because we don’t have Kayla [McCoy] to get us out of trouble.”

Nesci said that the target date for McCoy’s return to the field is May.

ECNL defending U17 National Champions CASL Chelsea Ladies continued their undefeated start to the season with a 2-0 win over FC Delco U18 from the Seminole Soccer Complex.

Joanna Boyles (North Carolina verbal) and Alexis Degler (Ohio State verbal) scored the two goals for the North Carolina side, as it improved to 12-0-3 on the season.

“Our team is family and we have been through a lot the past couple of years,” Boyles told TopDrawerSoccer.com. “With the national championships that we have won, we always have that target on our back. We want that challenge each game where we know the opposite team will give us their all and we are ready for that.”

Providence commit Moira Petrie had a solid game in the middle of the field for FC Delco, but the precision and speed of play from CASL set the champs apart on the day. Clemson recruit Claire Wagner anchored the CASL defense in the shutout victory.

Five different goal scorers chipped in for the Dallas Texans U16 on Friday in a 5-0 win over Bethesda SC. Brittany Crabtree, Samantha Chalken, Ashley Smith, Dominique Mazero, and Jamie Jeffrey found the back of the net for the Texas side.

“It is tough coming into this tournament because of Christmas and the break,” Texans head coach Sean Bubb told TopDrawerSoccer.com. “Last year, we came in here and we went down 3-0 after 30 minutes. It was very different this year because we focused on that start.

“It was a very good game until we got that third goal midway through the second half and it killed it.”

Leah Cochran and Alison Sackley combined for the shutout in goal for the Texans. Sackley made an excellent save in the final minutes of the game to prevent Bethesda’s Makela Davidson from finding the back of the net.

Texas A&M commit Emily Bates was instrumental in the result. She had one assists and set up another goal with a shot that was blocked. The active attacker was a handful for the Maryland club.

Texans round out the Event with games against Albertson Fury (on Saturday) and VSI West FL Flames (on Sunday).

U.S. U15 Girls National Team stars Ella Stevens and Jennifer Westendorf combined to score three goals on Friday for Gwinnett Soccer Association U16 (Georgia) and it was just enough in a hard fought win over Michigan Hawks 3-2.

“I think with the conditions as it is – it is a fast bumpy field – it was always going to be an end to end game,” GSA head coach Campbell Chapman told TopDrawerSoccer.com. “They are a good side with some very talented players. It was a good advertisement for girls soccer at the U16 age group.”

Stevens got on the score sheet first when she converted a penalty kick in the 10th minute. Eight minutes later, Westendorf ripped a shot from 20 yards out into the upper corner to double the lead.

Hawks got one back right after half though when left back Courtney Petersen hit a curling effort into the far corner of the net.

Stevens returned the lead to two goals seven minutes later when she hit one from distance after Brittney Bennett won a tackle and played a pass back to her. The youth national team standout drove the shot into the net from about 35 yards out.

The Michigan club kept it close though and found the back of the net again with 10 minutes left. Petersen, who had an absolutely superb game, set up the goal with a hard shot on the ground that was fumbled in front of goal by the keeper. Samantha Riga was there to smash the rebound into the net.

The Hawks could not find the late equalizer though and dropped to 8-3-1 on the season. GSA improved to 12-2-2, and Campbell is confident with how his team is shaping up.

“I think if we play the soccer that we can play, we are as good as anybody,” Campbell said. “We are obviously going to have someone who is going to score for us. And our strength is in the back. I thought Anna Bougas and Amani Bright were excellent for us today.”

Concorde Fire U17 used two goals in seven minutes in the second half to nab three points for its clash against Richmond Strikers on Friday.

Center back Anna Lee scored the first goal when she cleaned up a poor clearance from a corner kick and shot the ball back into the thick of things. Lee’s original effort looked more hopeful than confident, but it found its way past a sea of players and into the bottom corner of the net.

Sydney Lurie doubled the lead for Fire when she got onto the end of a beautiful cross from right back Kelly Dorney. Lurie’s sliding shot beat a defender and the goalkeeper to the ball.

Lee and the rest of the Fire backline shut down and frustrated Penn State recruit Elizabeth Ball on the way to the 2-0 result. Goalkeeper Ashley Fleck came up with a couple clutch saves as well.