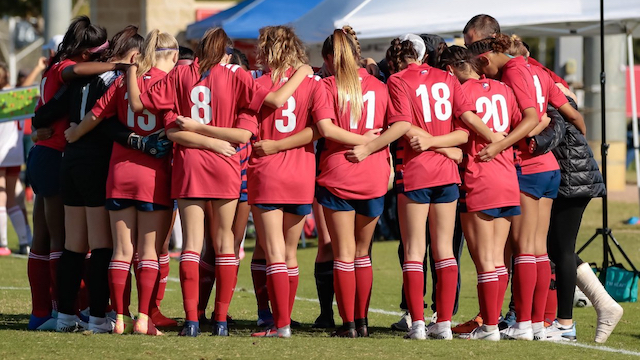 The first ECNL National Event of the season kicks off on Friday from Phoenix, Arizona. The 151 teams in Arizona for the three-day event will face a bit of an unusual ECNL event, as this is the first without Division I coaches in attendance given the recruiting dead period extending through the calendar year. There will be coaches from all the other levels of college soccer though. Plus, the league announced in October that they would stream and record all games from the showcase.

ECNL’s innovation during an unprecedented time sets up a showcase that sure to provide some of the most watched games in the history of the league. The Phoenix Fall Showcase is also bringing together some of the top teams from the first few months of the season, but also some teams that have yet to begin league play due to California’s never-ending youth sports shutdown, which adds another interesting wrinkle to the weekend.

TopDrawerSoccer will be on hand for the event. Check back on the site for daily recaps and standouts as well as a Best XI from the event next week.

Eclipse Select SC is 4-0 to start the season with a couple of impressive results to kick off the campaign. The stacked roster, which features a number of players with Youth National Team experience, takes on LAFC Slammers, So Cal Blues, and Sting Dallas Black during the event. The first two teams have yet to play this season in the ECNL so roster depth could be key for them at the Reach 11 Sports Complex. Eclipse will be looking for Jenna Stayart to continue her hot streak in front of the goal.

MVLA is another team that will be getting their first action of the season during the event in Arizona. MVLA has a stacked roster that includes California commits Karlie Lema and Maya Evans. MVLA faces off against Rebels SC, Real So Cal, and LA Breakers FC during the event. The game on Saturday against Real So Cal should be one to watch. The Southern California club has the Thompson sisters (Gisele Thompson and Alyssa Thompson) leading the way.

Sting Dallas Black has been terrific so far this season in a very difficult Texas Conference. Sting is one of the top attacking teams in the ECNL. Allison Perry is leading the way this season with 10 goals. Ashleigh Williams-Robbins is second on the team with eight goals. In total, more than a dozen players on Sting have scored a goal this season. While in Phoenix, Sting takes on Real Colorado National, LAFC Slammers, and Eclipse Select SC. Emerson Layne is leading the way in the attack for Real Colorado with eight goals through the first four games of the season. The TCU commit has been electric in the Northwest Conference.

Real Colorado National is 5-0 to start the campaign with impressive wins over Pride SC and Colorado Rapids. During the opening sprint, Real Colorado has only let in two goals. The defense which is led by goalkeepers Olivia Dietrich and Jordan Nytes and defenders Merrin Lien and Hazel Dirk will be tested in Phoenix. Real Colorado is scheduled to face Slammers FC, Real So Cal, and Vardar during the event.

FC Dallas is 9-0-1 to start the season and puts that undefeated streak on the line against LAFC Slammers, San Juan SC, and Michigan Hawks over the weekend. Goalkeepers Taylor Richards and Olivia Ramey have only given up five goals this season, and only one conceded over the last seven games.

Heat FC is another team to watch at the event. The Nevada club is early on in the season as the reopening has been slow for youth sports in that state, but the talent and depth on the roster should make them competitive in every game. Heat FC takes on Classics Elite, Pride SC, and Santa Rosa United during the National Event.

Local team Phoenix Rising is off to a hot start this season with four wins from the first four games. Samantha Fisher, Allyson Brown, and Millie Greer have been standouts in the midfield. Rising faces off against Sting Dallas Black, Davis Legacy, and Santa Rosa United during the event.

FC Dallas (8-0-4) is the only team unbeaten in the Texas Conference through the first few months of the season. Madison Stormberg, Jaden Thomas, and Taylor Cheatham have been among the standouts for Dallas this season. FC Dallas is scheduled to face San Diego Surf, Mustang SC, and Eclipse Select SC.

Real Colorado National (5-0) has been one of the most dominant teams in the early stages of the season. With 22 goals for and only one goal against, Real Colorado is shaping up as a must-see team in Phoenix. Reagan Kotschau is the team’s leading scorer so far this season with four goals and a pair of assists to her name. Real Colorado National takes on Eclipse Select SC, San Diego Surf, and LAFC Slammers in Phoenix.

Alexis Meyer, Amy Smith, Jace Holley, and Kiana Sparrow have been a potent attack for Colorado Rapids this season. The Rapids has ripped through the first part of the season with hardly a challenge, but the group will be tested in Phoenix. Rapids are scheduled to face off against LAFC Slammers, San Diego Surf, and So Cal Blues during the event.

So Cal Blues picked up some key additions during the offseason including former LA Galaxy standouts Kalia Kau (after her old club shutdown their girls soccer program). The new additions have fit in well with the returners and So Cal Blues is off to a 2-0 start through the early stage of the season. Blues take on FC Dallas, MVLA, and Colorado Rapids while in Phoenix.

Rebels SC is one of the new clubs to the ECNL scene this year, but they’ve already made a splash. Rebels opened the campaign with a 3-1 win over AZ Arsenal last weekend. They’ll try to continue that run with games against MVLA, San Juan SC, and FC Dallas during the event.