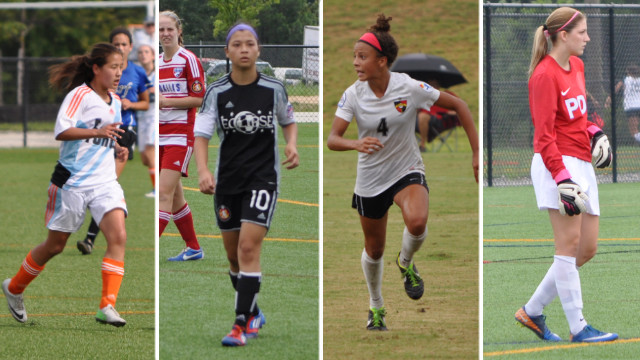 When the stakes are high, the best step up and excel.

That’s what several ECNL players were able to do over the last week in Richmond, Virginia, at the 2013 National Finals. Four teams raised trophies in the Champions League, as scouts, parents and college coaches looked on.

Here’s a look at the U14/U15 Best XI spotted by TopDrawerSoccer.com at the recent event:

GK Evangeline Soucie, PDA U14: A quality goalkeeper especially for someone her age, Soucie has good size, good hands and kept three shutouts up until the national final loss against De Anza Force. The netminder definitely has a bright future.

D Sophia Dertorossian, De Anza Force U14: While the Force turned heads in Richmond for its offensive prowess, its back line deserves at least partial credit. While the defense gave up seven goals in four games, Dertorossian had her best game in the national final against PDA, which earns her a deserved spot on this list. A composed center back who keeps calm under pressure, she coped well with PDA’s physical presence in the finale.