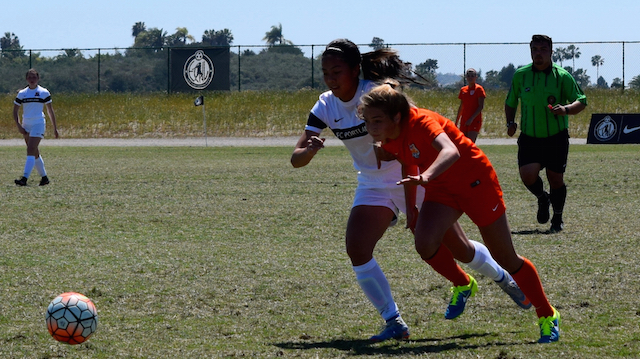 The ECNL postseason begins next week in Oceanside, as hundreds of teams descend on Southern California with hopes of advancing to the next stage of the playoffs. As part of TopDrawerSoccer’s coverage, TDS takes a look at the U16 and U17 age groups with an extensive breakdown of each group.

So Cal Blues (23-2-4) enters the postseason as the No. 3 overall seed. The Southern California giant’s roster is headlined by U.S. U17 WNT defender Kennedy Wesley who missed out on the last event, but should be ready for the playoffs after playing for the U17 WNT against Swintzerland recently. She is the big name of a star-studded team. Goalkeeper Lauren Brzykcy and midfielder Sierra Enge are players to watch as well. FC Stars of Massachusetts are hoping to stop the hometown team from winning the group. Stars rattled off 17 wins during the regular season and enter the postseason on an 11-game unbeaten streak. Virginia Tech verbal commit Karlie Johnson leads the FC Dallas attack. Johnson scored eight goals this season while chipping in five assists. She will be the player to watch for the Texas side. Northern California squad De Anza Force rounds out the group. Force is the only team in the playoffs with a negative goal differential.

Crossfire Premier (17-4-2) is the top seed in Group B of the 2016 ECNL U16 Champions League. Sophie Hirst leads the team in scoring with 16 goals from 19 games this season. Along with Taylor Nielsen, Annelise Henderson, Denae Antoine, and Cassidy O’Dell create a dynamic attack for Crossfire, which could see them through to the next stage of the playoffs. While Crossfire relies on a number of options, Internationals has been heavily relying just on Loren Sefcik. The Maryland commit scored 22 goals this season and will be looking to add to that tally in Oceanside. Heat FC is hoping to slow Sefcik down in the playoffs, but the Nevada side has the talent to match her output. Forwards Olivia Packer and Nohemi Mendoza have been excellent this season and are ones to watch in Group B. Rounding out the group is Orlando City, which has a star player as well in Hannah Telleysh. The quality in Group B will be fun to watch when the playoffs kick off next week.

PDA (22-0-3) is the only team in the U16 Champions League with an undefeated record. The Northeast Conference champions and No. 1 overall seed are the team to beat in this age group. PDA has a number of quality players and a ton of depth, which makes it pretty easy to see why this group is the favorites to lift the trophy. Through 25 games this season, PDA has only let in five goals. Goalkeepers Meagan McClelland and Grace Barbara have combined to lead the stalwart defense to the best record in the age group. However, this will not be an easy group for PDA. Tophat SC has one of the best players in the country in this age group in Rachel Jones and she will test that PDA defense. Vardar and Dallas Texans are the distant underdogs of the group and hoping to rely on a cohesive game plan to take down the heavy favorite.

Michigan Hawks (16-4-5) ended the season as the Midwest Conference champions with no losses in conference play. The quality regular season campaign helped earn the squad a seed in the playoffs. U.S. U17 WNT newly discovered defender Alexa Spaanstra is the player to watch from this group. She is fully capable of taking over a game or two in Oceanside. While Hawks captured the top seed in the group, San Juan Soccer Club isn’t far off. San Juan only lost one game all season. The long roster from the Northern California side had good balance and depth, which could carry them far in the postseason. Slammers FC and FC Virginia are hoping to knock off the favorites in the group. FC Virginia will be looking at forward Amy Thompson to help topple the giants. Thompson scored 19 goals during the regular season.

Group E feels like it is wide open heading into the playoffs as the two favorites finish near each other in the final Champions League standings. Jacksonville FC ended with a 16-4-7 record while Real Colorado finished the campaign with a 14-4-3 mark. On paper, Real Colorado has the more familiar names with U.S. U17 WNT regulars Sophia Smith and Jaelin Howell leading the way. Jacksonville has shown that it can compete against the best though. World Class FC and Richmond United round out the group. Richmond United could be the one to watch. After the club’s U15 team failed to make the playoffs World Class, it opened the door for Jordan Canniff to join the U16 side for the playoffs, which could shift Richmond into the favorite role for this group.

Solar Chelsea Soccer Club (22-2-3) enters the postseason as the No. 2 overall seed and the champions of the Texas Conference. However, Solar lost two of the last three games, which knocked the squad from the undefeated ranks within the last month of the regular season. Will the form continue in Oceanside? McLean Youth Soccer Mustang SC, and West Coast FC stand in the way.

Indiana Fire (17-1-6) enters the postseason as the No. 4 overall seed and the champions of the Ohio Valley Division. Indiana has relied on midfielder Cassidy Lindley to carry the load for the majority of the season as she has 18 goals and seven assists to her name. Birmingham United has a standout as well in Hailey Whitaker who scored 16 goals in 27 appearances. Stanford commit Luisa Delgado Heinz leads the Real So Cal group. She scored nine goals in 22 appearances. Baylor commit Taylor Moon has been the star of the D’Feeters team this season. She has 16 assists in 26 appearances.

Eclipse Select Soccer Club qualified for the postseason as the No. 11 overall seed, which is a commendable achievement. However, it feels like this group underachieved on the regular season and could be one to watch in the postseason as the roster has the most potential to pick up difference makers for Oceanside. Ohio Premier is hoping that Eclipse can’t find that magic formula, as the group from the Mid-Atlantic looks at Lyda Bogdanovitch to lead the squad through the playoffs. Albertson Fury and Colorado Storm round out the group.

Another year, another season where De Anza Force I18-3-2) is one of the favorites to lift the national championship in this age group. The Force team is loaded with quality players and they try to play a possession-dominant style of play, which is a gift from the heavens for a neutral supporters’ view point. Tophat SC, Texas Rush, and Match Fit are standing in the way of Force’s quest for the title. Tophat’s Caroline Orman is the leading scorer among that group after finding the back of the net 17 times in 24 games this season.

PDA (18-4-3) leads the charge in Group B after finishing as the regular season champions of the Northeast Conference. The New Jersey club only managed one win from the three games during the National Event in May, which could cause some concern. PDA also let in six goals during the three goal stretch. Ohio Elite, Solar Chelsea, and Colorado Rush are hoping that the temporary slip in form continues for the next week. Solar is counting on Haley Berg to keep her stellar season going after she scored 34 goals and added 19 assists during the 2015-2016 campaign.

Kelsey Turnbow and SC Del Sol (24-2-3) headline Group C. The U.S. Youth National Team forward finished the season with 37 goals from 29 games. She led SC Del Sol to the top spot in the Champions League standings. Albertson Fury, Eclipse Select, and Orlando City are all hoping to have the right recipe to slow Turnbow down in the playoffs. They will need to shore up the defense on her side of the field as she likes to take players on down the wings.

Jacksonville FC (20-2-5) holds the top spot in Group D after earning a seed following a strong campaign in the Southeast. Jacksonville is counting on Angeline Daly to lead the way as she pulls the strings from the center of the field. Daly has a ton of talent and could be the one to lead Jacksonville into the next stage of the competition. Colorado Storm, Maryland United, and FC Stars of Massachusetts are hoping to put a stop to the Florida’s squad charge for the next round.

The speedy TSC Hurricane (19-3-5) attack leads the charge in Group E. Hurricane’s frontline has combined to score 44 goals in 28 games this season. Parker Goins in the leader of the pack with 16 goals and nine assists. Adrienne Richardson and Minnesota Thunder and hoping to slow Hurricane down in the playoffs. Richardson has been one of the best in the ECNL, as she finished the regular season with 25 goals and 16 assists in 22 games. Slammers FC and CASL round out the group.

Dallas Texans (19-4-4) lead the way in Group F. Forward Alexandria Griffin has been a star for Texans this season with 30 goals and six assists in 26 appearances. The Texas A&M commit was the top scorer in this group. Michigan Hawks, Real Colorado, and FC Virginia are hoping to slow her down in Oceanside.

Wisconsin commit Alexandra Rice leads the way for Indiana Fire (19-4-1) in Group G. Rice finished the regular season with 19 goals from 20 games. She will have a tall task ahead of her in Oceanside though, as San Diego Surf, Caroline Elite Soccer Academy, and Crossfire United stand in the way. Surf possesses probably the most talented roster in the group with Catarina Macario and Julie Doyle leading the group.

West Coast FC is the highest seeded team in Group H. Stanford commit Sophia Serafin is the top player in the squad. She has the speed and skill to break a game open. It’s far from a one-player team though. West Coast FC relied on a strong tactical base and good depth to claim the title in 2015. Concorde Fire, FC Dallas, and Crossfire Premier round out the rest of the group.