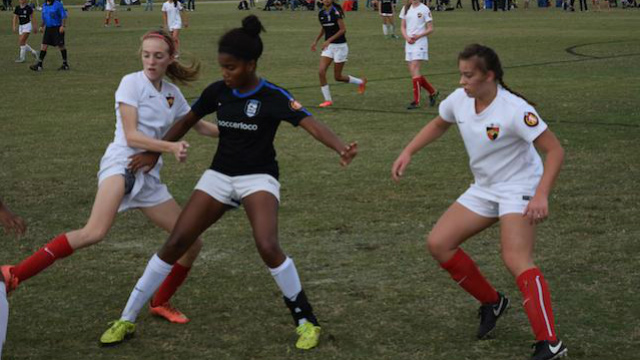 The ECNL postseason kicks off on June 23rd from the SoCal Sports Complex in Oceanside, California. TopDrawerSoccer will be on hand for the action as the best teams in the nation’s best girls club soccer league compete for the ultimate honor in front of a bevy of college coaches and youth national team scouts.

The U14 and U18 divisions decide the national winner at the event in Southern California, as only 16 teams qualify for the playoffs in those age groups. In the other three age groups, the post season play in SoCal is just the first step in the race to the title.

In the buildup to the kick off from Oceanside, TopDrawerSoccer is previewing the teams and players to watch for the ECNL playoffs. Below is a breakdown of the U14 and U15 age groups, which features some of the top talent in the league.

Ohio Premier enters as the top seed overall in the competition after accumulating a 20-1-1 record through the regular season. Kevin Dougherty’s side has a dynamic attack that has picked up 64 goals along the way combined with a stout defense that has only let in 13. The top seed looks like the early favorite in this group. However, FC Dallas, MVLA, and Arsenal FC all look capable of pulling the upset. FC Dallas and MVLA have some history as the Texas side defeated MVLA 6-1 during the showcase event in Oceanside in April.

Hometown favorites So Cal Blues SC highlight Group B of the 2016 U14 ECNL playoffs. The Blues finished the season as the champions of the Southwest Conference with a 17-0-3 record. The Blues are not the only team in this group with an undefeated conference record as East Meadow also went 17-0-5 along the way. Goalkeeper Stephanie Sparkowski only conceded 10 goals throughout the season. She will be tested in Southern California, as two historic powerhouses in Eclipse Select Soccer Club and Real Colorado round out the group.

FC Virginia is the top seed in Group C after winning the Mid-Atlantic Conference and compiling a 19-1-2 record along the way. The FC Virginia squad only let in four goals in conference play this season as goalkeepers Ella Gantman and Lauren McMarlin both had tremendous seasons. Washington Premier, Concorde Fire, and Solar Chelsea SC will be the teams competing with FC Virginia for the top spot in the group. Washington Premier enters the postseason after suffering its first loss of the season in the final regular season game. Washington Premier lost 0-1 to rival Crossfire Premier, which kept Washington Premier from claiming one of the seeds in the playoffs.

Michigan Hawks are the lasted seeded team and take up the top spot in Group D. Hawks (13-1-2) will face Tophat Soccer Club, Eagles SC, and Match Fit Academy in Oceanside. The Midwest Conference champions are riding an eight-game winning streak heading into the competition. This could be a high-scoring group as every has notched more than 48 goals this season. The talented attacking players could be on the radar for the scouts in attendance.

San Diego Surf takes the top spot in Group A after picking up a 20-1-5 record in the regular season. Surf finished as finalist in the 2015 ECNL U14 championship so the team is one to watch in Southern California. Standing in the way of Surf is Vardar, FC Virginia, and Penn Fusion in Group A.

Mustang SC headlines Group B. The California Division champions of the Northwest Conference hold the record for the fewest goals conceded this season with only eight allowed in 20 games. Goalkeepers Isabeloa Turek and Angelina Anderson combined for the stellar outing for the Northern California side. Mustang will take on Tophat Soccer Club, Dallas Texans, and Real So Cal in Group B. Tophat looks poised to challenge that Mustang defense after the Southeast Conference squad scored 72 goals this season.

Concorde Fire was the top seed heading into the postseason and ended up as the headliner in Group C. Fire finsihed the regular season with a 19-0-5 record and the most goals scored with 78. The Georgia club has a star shuffed roster that includes youth national team regulars Croix Bethune and Nicole Payne. Ohio Premier, Colorado Rush, and Sporting Blue Valley will be trying to stop the top seed in Group C. Rush has a stacked squad of its own with Audrey Weiss and Coriana Dyke leading the way, which should set up for a great battle in Group C.

Solar Chelsea Soccer Club takes the top spot in Group D after picking up an 18-3-3 record in the regular season. Solar has counted on forward Sydney Nobles and Kayley Ables to lead the way this season with the terrific twosome combining for 31 goals and 10 assists. FC Stars of Massachusetts, Eclipse Select, and San Juan Soccer Club will be eager to slow them down in Oceanside.

Michigan Hawks (14-4-4) won the Midwest Conference and the top spot in Group E for the postseason. The Hawks are counting on a stout defense to help lead the way to a place in the next round in the playoffs. FC Boston Scorpions, SC Del Sol, and FC Nova pose a formidable trio that are trying to knock off Hawks and claim the top spot in the group at the end of the week in Oceanside. SC Del Sol forward Kyla Ferry might be the one to watch in this group after she scored 16 goals and added 16 assists during the regular season.

Group F is shaping up to be the most difficult group in the U15 age group. PDA and Slammers FC are both teams on the shortlist for national title favorites, and they were paired against each other in Group F. The challenging opening slate only gets trickier with CASL and Crossfire Premier also involved in the group.

GSA is the top seed in Group G. The Southeast Conference squad relied on a balanced attack to rattle off 16 wins this season. GSA will take on Bethesda SC, FC Dallas, and So Cal Blues with the hopes of moving onto the next stage of the postseason.

Dallas Sting leads the way in Group H with West Coast SC, Real Colorado and Orlando City also in the mix in the final group from the U15 Champions League bracket. It could shape up to be a pretty even battle among the four. Orlando City’s Kristen Scott is the leading scorer of the group.