ECNL Playoffs: Moving toward the finals

On day one of the ECNL Playoffs we take a look at 5 very talented players you may not know of.
by J.R. Eskilson

AURORA, Colorado – Even a thunderstorm could not slow down the blistering pace of play on the second day of the ECNL Playoffs.

The intensity and quality of play picked up on Saturday as players adjusted the climate and the focus moved toward group standings with only a finite amount of tickets available to the next round for the U15-U17 age groups. The top team from each of the playoff groups advances to the National Finals in Richmond, Virginia in July; so keeping that dream alive was a top priority on the second day of the ECNL playoffs. 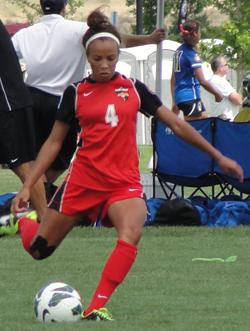 After the Round of 16 featured two penalty kick shootouts and another overtime clash, the quarterfinals figured to be just as tight, but that is now how it turned out in the final games of the day from the Aurora Sports Park.

TSC Hurricane avenged its only two losses of the season when it defeated Dallas Texans 3-1 in the quarterfinal round. The Texas club bested the Oklahomans in the two previous meetings, but the third time was the charm for Hurricane.

Kristen Killion, Anna Beffer, and Shiloh Price scored for the squad from Tulsa. Julia Dyche had the consolation goal for the Texans.

Price got the party started in the tenth minute when she tried her luck with a shot from 20 yards out with a defender on her back. The twirling effort snuck inside the near post for the opening goal.

Dyche put the squads back on level terms two minutes with a nasty free kick from 25 yards that exploded off her foot and screamed into the back of the net.

The teams exchanged chances over the rest of the half and into the second half with both hitting the post.

Beffer broke the deadlock when she tucked away a chance created by Killion’s vision in the center of the field. Killion hit a diagonal pass in behind the defense that allowed Beffer to beat the Texans keeper for the game-winning goal.

On the neighboring field, Colorado Rush cruised past Mustang SC 5-1 thanks to a pair of goals from Danica Evans. Rush scored three goals in the opening 30 minutes and never looked in danger of falling in front of its home fans. Rush takes on TSC Hurricane on Sunday in the semifinal clash.

Nearby, CASL and Ohio Premier Eagles sealed their places in the semifinals with wins over FC Stars of Massachusetts and Real So Cal respectively.

Crossfire Premier and Carmel United both had plenty to play for on Saturday morning at the Aurora Sport Park, as both looked to take a big step toward the National Finals from Group G action.

The two squads, which both knock the ball around the pitch with pace and skill, could not separate from each other and ended up sharing the points with a 2-2 result that left Crossfire at the top of the group with one more game to go.

Carmel got on the board first when Penn State commit Katy Keen unleashed a laser from her left foot that found the upper corner of the net.

Kenadie Carlson nearly doubled the lead for Carmel when she broke free behind the Crossfire defense, but her shot went over the bar.

Crossfire equalized on a tally from Jessica Kennedy off an assist from Brooke Pingrey. The Washington club took the lead shortly before half when Calisse Crisier’s shot found the back of the net off of Pingrey’s second assists of the day.

Madison Turner notched the game-tying goal in the 59th minute when she capitalized on poor communication between the defense and goalkeeper from Crossfire. Turner’s speed allowed her to race past the final defender and then around the keeper for the easy finish.

Dallas Sting virtually assured its place at Finals Week with a 2-0 win over Penn Fusion SA on Saturday. Sting still needs a draw from its final game, but the defending national finalist will be gunning for the win.

Mimi Asom and Kate Hajdu scored for Sting in a four-minute span in the first half. Asom combined with Kaycie Tillman on the opener as the pressure from the two forwards created a turnover and then allowed Asom to break free on goal , which she finished with a thunderous strike.

Hajdu doubled the lead off an assist from Taylor Cobb, who did the hard work to create the chance out of nothing and then deliver the cross that Hajdu finished.

Fusion nearly cut the lead in half early in the second half when its increased pressure in the attacking third resulted in a foul in the box. Sting goalkeeper Alyssa Palacios came up with the clutch save though that preserved the shutout.

Real Colorado’s Mallory Pugh is pretty good at drawing a crowd – whether it is college scouts on the sidelines or defenders on the field, Pugh is typically surrounded. It does not seem to trouble the U17 Women’s National Team member who scored twice in the opening 50 minutes on Saturday to help her club to a 3-0 lead over Mustang SC.

Shortly after Pugh’s second tally, a thunderstorm delay interrupted the second half for 45 minutes before the players could return to the field. Real Colorado added three more goals after the break to secure a 6-2 win.

Real Colorado only needs a draw on Sunday against FC Stars of Massachusetts to grab its spot at the National Finals.