ECNL Preview: All action weekend ahead The ECNL season may be relatively young, but there’s no shortage of action. A look at some of the top clubs playing this weekend. 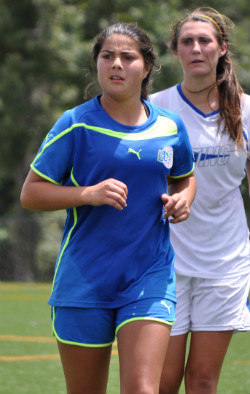 It’s a busy weekend for the Michigan Hawks and a handful of other teams making a trip to Indiana. The club is posting up in Indiana for the two-day stretch, with games against Ohio Premier, Carmel United and Continental FC Delco.

Also making an appearance in Indiana is FC Wisconsin Eclipse, who gets games against Penn Fusion, Carmel United and Internationals, along with Eclipse Select and FC Bucks.

Looking to keep an unbeaten start to the season going, PDA is in action against fellow New Jersey club World Class FC, squaring off this Saturday.

With a bright start under its belt to the fall season, CASL is taking a trip north to Virginia for games against Richmond Strikers and Virginia Rush Soccer Club. Avery Gardner and Meredith Brown have supplied most of the offense so for this season for the Carolina club.

Florida clubs are paying a visit to Georgia this weekend. The Atlanta Fire will look to jump up in the Southeast Conference standings when Orlando City YS and VSI West Florida Flames come to town on Saturday and Sunday respectively.

Action continues in Texas as well, as Solar Chelsea looks to build off of a positive beginning to the season. Albion Hurricanes FC and Lonestar SC are making the trip to the Dallas Fort Worth area as the race for the top of the Texas Conference continues.

A strong defense has helped Lonestar to an unbeaten start to the season, winners of three of its first four ECNL matches on the season. That mark is going to get a stiff test over the weekend, with games against Dallas Texans and Solar Chelsea SC up next.

Winning close games has been a key to McLean Youth Soccer’s performance in September. With a tricky matchup against local rivals FC Virginia, McLean faces a tough task in continuing its unbeaten run. Meghan Kammerdeiner has had a hand in all five of the team’s goals so far this season.

The season is young for MVLA, with only two games played so far. That’ll change this weekend with a Northwest Conference matchup on the schedule against the Pleasanton Rage.

Facing its first out of state road trip of the season, NC Fusion is traveling north along with CASL to Virginia. The Fusion takes on the Virginia Rush on Saturday, and stop by Richmond for a meeting with the Strikers on Sunday.

It’s been a dominating first few games for the So Cal Blues. During a perfect September, the California club posted a 3-0-0 record, outscoring the opposition 13-0, with Erika Okuma, Anika Rodriguez and Katie Pingel driving the attack. A weekend matchup against Eagles SC awaits for a big test.

Not far behind the Blues in the Southwest Conference is West Coast FC. Like their in state counterparts, West Coast is undefeated through three games, with 11 goals already ahead of Sunday’s game against Real So Cal.

A talented San Diego Surf side heads back into action on Sunday after opening the season with two wins last weekend. Pilar Torres pulls the strings in the midfield for the Surf, who qualified for the ECNL National Finals last summer.

Being in the early part of the season is a common theme in California. MVLA has only one game under its belt, and is taking on Pleasanton Rage on Sunday. Midfielder Sarah Robinson, bound for Stanford(w) next fall, leads with team with two goals after one game.

TSC Hurricane attacker Anna Beffer has picked up where she left off last year, with four goals and three assists already in the 2013-14 campaign. Her club is looking to snap a two-game losing streak on Sunday against Challenge SC.