ECNL Preview: Almost at the end 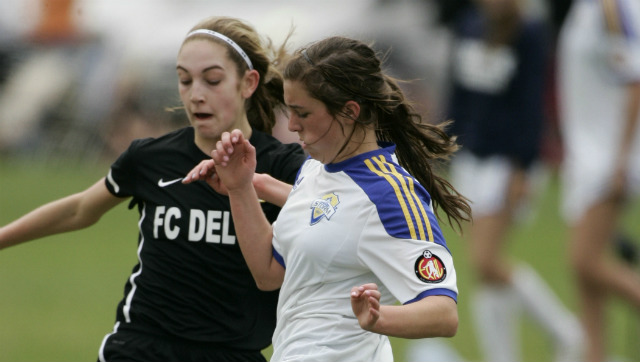 This weekend is of critical importance for FC Virginia, which can clinch a spot in the National Playoffs at this age group with a win or draw against local club Bethesda SC. FC Virginia also gets a chance to go up against Freestate Soccer Alliance over the weekend. 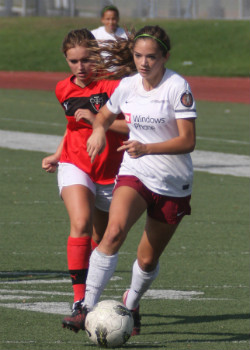 It’s a finale for most clubs down in Texas, including first place Solar Chelsea. With a matchup on Sunday against AHFC to wrap things up, Solar can turn its focus to the National Finals event down in Richmond this July.

A rescheduled matchup between Penn Fusion and FC Bucks has significant implications for the Northeast Conference race. The first-place Bucks can solidify its grasp on the top with a win, while the Fusion can move its playoff hopes onto sturdier ground. Emma Loving’s seven goals have helped the Bucks to its spot thus far.

Having not suffered a loss in the Texas Conference all season – a mark of 12-0-4 – the Dallas Sting wrap up its ECNL slate with two final games, with the opportunity to achieve an unbeaten 2012-13 campaign against AHFC and Challenge SC. Lakyn Pope’s 11 goals in 22 games have gone a long way in helping the team to its record, and she’s received plenty of help from Jordan Harr and Stefani Doyle.

Carmel United has asserted itself at the top of the Midatlantic Conference, and faces the same opponent twice on Saturday and Sunday, going up against third place Ohio Elite Soccer Academy. Contributions have come from several players for Carmel this year, with Amanda Shaw, Grace Myers, Madison Lewis and Ryan Koskoska all showing consistency.

An important tilt in the Northwest Conference looms for Friday night, as Seattle rivals Crossfire Premier takes on Washington Premier. Crossfire trails its in state counterparts by three points, adding necessity for the win, while Washington can all but clinch top spot with the victory. The two sides will meet again on May 31.

The first season in the ECNL has been a good one for MVLA at this age group. Of course, with U17 Women’s National Team player Tegan McGrady, it’s no surprise, along with other talents like Jayme Hughes, Shaelan Murison Brown and Marissa Hing. A playoff spot looks safe at this point, and on Saturday the club faces Mustang SC before wrapping its season up in New Jersey.

After not playing since the end of February, teams in the Southeast Conference are heading back into action. The Atlanta Fire takes on local rivals Gwinnett Soccer Association on Saturday with the two teams jockeying for postion in the conference and national standings ahead of the postseason.

The playoff picture is a rosy one for Internationals SC in its first season in the ECNL, and two games against Maryland opposition is an opportunity to narrow the gap at the top of the Division. Dynamic midfield play of Emily Ogle (13 goals, 10 assists) has been a big part of the success from a results perspective, and with matchups against Bethesda SC and first place Freestate Soccer Alliance.

It’s a big enough gap at the top of the division standings for the San Diego Surf to have a playoff spot completely secure. They’ll look to bolster their point total on Saturday against Arsenal FC before hopping on a plane and flying cross-country for next weekend’s PDA Event.

The Surf’s closest rivals, second place Slammers FC, are also in action with a game against Eagles SC.

It’s the final weekend action for the month of May at this age group, as there are no games scheduled for Memorial Day weekend with the rest of the ECNL focused on the National Event in New Jersey.

First place is still on the table in the Northeast Conference between two top clubs in PDA and FC Stars of Massachusetts, and it’s a busy weekend for both club. PDA hits the road and can seal first place with wins against Connecticut FC and SoccerPlus Elite Connecticut.