ECNL Preview: Back into the swing of things Much of the focus of this weekend’s action in the ECNL will be on the Jefferson Cup, as eight teams will compete in league play at one of the East Coast’s largest youth soccer weekends down in Richmond, Virginia.

That’s not all the action for this weekend, however. A full look at what lies ahead:

It’s about to get very busy this weekend for teams in this age group, with U14 ECNL squads taking part in the Jefferson Cup. Virginia Rush, Ohio Premier Eagles, Carmel United, FC Virginia, McLean Youth Soccer, Ohio Elite Soccer Academy, Internationals SC and obviously the Richmond Strikers will all play a flurry of games on Saturday and Sunday as part of the Showcase event. It’s a chance for Midatlantic Conference first place squad Carmel United to extend its lead at the top. 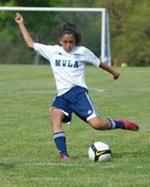 An important matchup in the Pacific Northwest pits local clubs Crossfire Premier against Washington Premier. The latter is looking to compete for top spot in the Northwest Conference, while Crossfire can get its season back on track with a win.

Two clubs that just started their ECNL slate, PDA and World Class FC, meet after playing just two games each so far in the season. Both are looking to grab the full three points in order to compete for playoff spots.

Undefeated conference records are going to be on the line at the Jefferson Cup when FC Virginia (9-0-2) and Carmel United (3-0-1) play on Saturday. Both are looking up at Freestate Soccer Alliance in the standings, one of the local clubs not making the trip to Richmond.

Playing its first matches of the year is FC Stars of Massachusetts, who will be visited by FC Bucks and Penn Fusion. FC Stars began the season with six games in December, but haven’t played since, a challenge that will surely test players like Jordan Cossey and Gabrielle Carreiro. Those games did feature three conference wins, something that the Stars won’t want to let slip.

Also seeing action for the first time in a long time is MVLA – only that they haven’t played since October. That run featured four wins in conference play, and a matchup against Santa Rosa United on Saturday is a chance to make that five wins in five. U.S. U17 WNT hopeful and outside back Tegan McGrady is one of many talented players on this MVLA squad.

At Jefferson Cup, McLean Youth Soccer is one of the teams to watch, featuring another U17 possibility in Mia Hoen-Beck. With 20 goals through 16 games, Hoen-Beck will look to add to her total and more importantly, pick up some wins when McLean plays against first-place Ohio Elite Soccer Academy and Carmel United.

Looking to keep up with that PDA squad is FC Bucks, with a pair of games scheduled for this weekend against FC Stars of Massachusetts and Scorpions SC, both teams that will provide a significant challenge.

Another team experiencing early success so far is Crossfire Premier. Calisse Crisler, Emily Crichlow and Madelyn Seckman have all played a role in the team’s unblemished conference record (4-0-0), a mark that will be tested by local counterparts Washington Premier on Saturday.

The top six teams in the Midatlantic Conference are all slated for Jefferson Cup action, which makes it an even bigger prospect for them. Ohio Premier Eagles, currently at the top thanks to its 5-0-0 conference record, plays against Virginia Rush and the Richmond Strikers, aiming to cement its grip on top spot ahead of both Carmel United and FC Virginia.