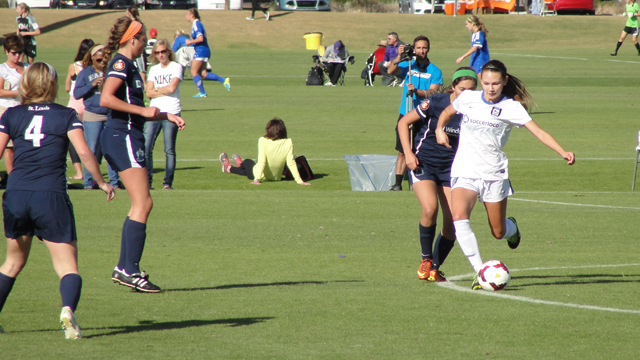 A couple of clubs jump into their first games of the season this weekend in the ECNL, while other teams are well into the heat of the campaign. Check out a brief of the games to watch from each of the five age groups.

FC Portland gets its first taste of ECNL play with a trip to Utah this weekend. Portland takes on FC Nova (Boise, Idaho) and Utah Avalanche on Saturday and Sunday. FC Nova and Utah Avalanche are both 0-0-2 on the season after a pair of draws between the two clubs to open the campaign.

Colorado Rush hosts San Juan Soccer Club and Santa Rosa United this weekend. Rush is off to a perfect start this season with a 3-0 record and 14 goals for while only conceding one. Audrey Weiss leads the team in scoring with three goals and two assists. San Juan is also 3-0 and only conceded one goal from those three games. The match-up should be a good one.

After a few weeks off, Bethesda SC returns to ECNL play with a game against McLean Youth Soccer on Sunday. Bethesda is 2-0 on the season while McLean is 1-2.

There is a showdown in Texas this weekend when Dallas Sting hosts Dallas Texans on Sunday. In the U15 age group, the Texans are third in the conference with a 4-2-2 record. Sting sits in fifth with a 3-3-1 mark. Grace Harr leads the Sting in scoring with four goals in seven games. Former So Cal Blues standout AK Ward paces the Texans attack with six goals in her first eight games with the club.

West Coast FC hosts rival So Cal Blues on Sunday afternoon in a battle of two of the top clubs from Southern California. West Coast FC is 5-2-2 on the season. Mia Roth is the leading scorer for the team with five goals. So Cal Blues sit atop the division with a 6-0-1 record.

Minnesota Thunder Academy opens its season with games against Sporting Blue Valley and St. Louis Scott Gallagher Illinois. Thunder has four games in October and will be looking to make up ground on its competitors in the Midwest Conference.

Colorado Storm is the only undefeated team in the Colorado Division in the U16 age group, but the Storm sit in last place after a 1-0-2 start to the season. Storm is trying to change that this weekend with games against Santa Rosa United and San Juan Soccer Club on the schedule. Allison Schlegel and Elisabeth Geraghty pace the Storm attack.

The improving Arsenal FC takes on Strikers FC this Sunday in a battle of Southern California teams. Arsenal FC is 2-1-4 in the uber competitive conference so far this season. Josie Guinn leads the attack with eight goals in six games.

Richmond United faces an important conference game on Saturday when NC Fusion comes to town. Richmond is 1-1-1 on the season thanks to some solid play from the defense and goalkeeper Grace Young. Fusion is 2-3 on the campaign thanks to forward Brooke Bingham who has four goals in five games.

It’s a showdown between first and second place in the Southwest Conference on Sunday when San Diego Surf hosts Real So Cal. Surf is 5-0 on the seasons. Taylor McMorrow, Valerie Koerber, Eva Herrera, and Dana Dalton all have three goals this season to lead the balanced Surf attack. Real So Cal is 6-1-1 on the season with 19 goals scored and only three conceded. Notre Dame(w) commit Brooke Littman has been in goal to record six shutouts this season for Real So Cal.

The Dallas Sting matchup against Dallas Texans in the U17 age group is a battle between the first and third place teams in that conference. Sting is 7-0 on the season and yet to concede a goal. Texas(w) commit Nicole Curry and Dani Greenlee have shared the honors in goal for the seven shutouts. Texans have the best offense in the division thanks to Texas(w) commit Haley Berg, who has nine goals and six assists in eight appearances.