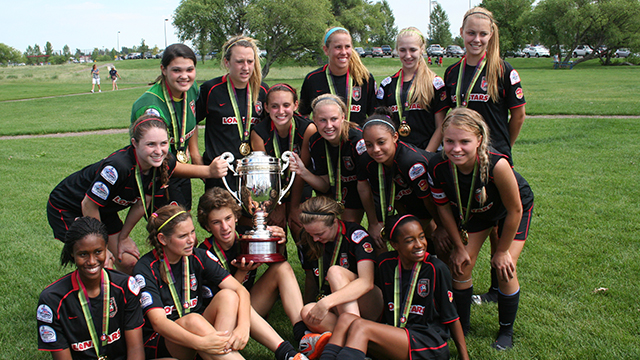 There are only three teams in the ECNL that can claim the title as the defending national champion in their age group: LoneStar SC (U16), CASL Chelsea Ladies (U17), and San Diego Surf (U18).

How have those teams fared with a target on their back throughout the season? 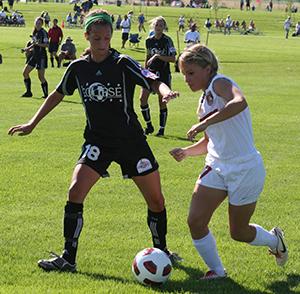 Lonestar is 10-4-2 on the year in A-Flight play, and holds down the third spot in the national standings. Mikaela Harvey, number seven in our 2014 rankings, tops the team in scoring with 13 goals and three assists this season.

CASL is also third in the national standings for its age group with a 9-4-1 record. The regular season concluded for Damon Nahas’ group in February. U.S. U17 Women’s National Team midfielder Joanna Boyles, number 13 in our 2013 rankings, is the leading scorer on the team with nine goals and five assists.

San Diego Surf is the lone reigning champion that has struggled defending the title. Surf is currently outside of the playoff picture in the 20th spot and only has two games left to make up the difference, with graduation having depleted the roster from last year’s title-winners.

The first game comes on Saturday against West Coast FC. Surf won the first meeting between the teams 2-0 behind goals from Mackenzie Akins and Kodi Lavrusky. Akins is in a hot-streak of her own right now with five goals in her last two games. The Montana-bound striker has scored 14 goals on the season.

In Georgia, Atlanta Fire is hoping to keep the pressure on the top two teams in the conference with a win against Birmingham United on Saturday.

Fire is currently third in the standings with only two games remaining on the docket, so every point counts for Denny Jenkins’ side. The prolific forward pairing of Elexa Bahr and Danielle Marcano has lead the way for Fire this season. The two have scored 27 goals and contributed 16 assists.

Up the coast, FC Virginia caps off its regular season with a clash against the Richmond Strikers. FC Virginia is top of the conference with an 11-3-1 record this season. Sierra Lam has been in charge of the offense with 11 goals on the year.

The battle in Southern California is heating up.

Real So Cal U15 squares off against San Diego Surf on Saturday in an important Flight A fixtures. Real So Cal is currently holding the 13th spot in the national standings, which puts it firmly on the bubble for a playoff spot.

Adolfo Perez’s side will be counting on Alana Hillman and Taylor Ayers to lead the offense against the staunch Blues’ defense. On the other side, Miranda Schulz and Anika Rodriguez have been the story for much of the season in the Blues’ attack. The two have combined for 23 goals and 7 assists.

FC Stars of Massachusetts is one of the many teams hoping for a Blues victory on Saturday. The Stars are currently in 19th place in the national standings. The Stars play Albertson Fury on Saturday.

A Flight B showdown is of the highlight of the weekend in the U16 age group. Connecticut FC plays World Class FC on Sunday in a matchup between the fifth and sixth place teams, respectively, in the B-Flight.

Brenna Brown and Alana O’Neill have been the stars of the World Class FC attack with 17 goals combined in 17 games.

West Coast FC, the third place finisher in the U15 National Championship last season, is on the cusp of missing out on the playoffs this year. WCFC is currently in the 15th spot in the national standings with only five games remaining.

Real So Cal, last year’s finalist at the National Championship, is riding a four-game shutout streak into this weekend’s clash against So Cal Blues. Real So Cal has notched four wins over that period and jumped into the ninth spot in the national standings and top of the SoCal Conference.

On the opposite coast, the meeting between Bethesda SC and Freestate Soccer Alliance carries significance for both teams. Bethesda is trying to stay in the top 16 (currently in the 14th spot) and earn a playoff berth, while Freestate is attempting to stay out of the bottom four and avoid the drop to the B-Flight.

Freestate will be counting on talented forward Allison Cislo to push the attack against Bethesda, which will be shorthanded with Andi Sullivan still off in Guatemala with the U17 Women’s National Team.

Mustang SC is riding one of the longer unbeaten streaks in any age group in the ECNL.

The Northern California team is unbeaten in its last 12 games, and charging to the finish line with only one game remaining on the schedule. On Saturday, the Mustangs cap the season with a tilt against San Juan Soccer club.

FC Stars of Massachusetts is going to have to fight through another weekend without its star, Morgan Andrews. The captain of the U.S. U17 WNT has one more game to play in Guatemala before returning to her club.

But the Stars have done well without her. The team is currently riding an eight-game undefeated streak and sits in the seventh spot in the national standings.