ECNL Preview: Rush on the Road When discussing some of the top, most well known clubs across the country, you’d be remiss not to mention the Colorado Rush.

Possessing a prominent presence in both the Development Academy and ECNL, the Rush girls’ teams are back on the road this weekend with a trip to Arizona for games against SC Del Sol and Sereno Soccer Club.

Most Rush ECNL sides have enjoyed strong starts to the season, and the U18 team has looked good in particular early one. It helps to have talented players like Morgan Stanton, Darian Jenkins, Elizabeth and Garbrielle Miranda, all members of the U17 WNT World Cup squad, on the roster this fall. 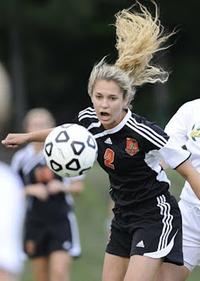 But away from that, Danica Evans has already scored 11 goals so far this year, and Kelli Drobney has 8 of her own. Both will be dangerous players heading into the weekend.

Carmel United has jumped out of the gates strong on this season, sitting pretty at the top spot in the Midatlantic. They’ll play two games at home this weekend, with Maryland clubs Bethesda SC and Freestate Soccer Alliance visiting the Hoosier state.

While the Colorado Rush certainly is the more recognized team, Real Colorado is traveling to Phoenix as well looking to mix things up. Real has yet to lose a game this season so far, and that’s something it won’t want to change on the road. Mallory Pugh has been the star up top so far, with 10 goals in her first 7 games of the season.

Can De Anza Force peg back Mustang SC? That’s the objective this weekend when the two conference foes meet up. Mustang hasn’t lost a Northwest Conference game yet, as midfielder Morgan McGarry has helped drive the offense with 7 assists at this point.

A tricky road trip is on the docket this weekend for the Michigan Hawks. Yet to lose a game so far this year, they travel to St. Louis for a pair of games against St. Louis Scott Gallagher’s Metro and Missouri clubs.

The top two teams in the SoCal Conference face each other, as West Coast FC and So Cal Blues are scheduled to meet. There’s little separating the two sides so far this year, but West Coast’s Mikayla Casey and Leah Pruitt will continue looking to make plays in the offensive third of the field.

It’s been a good start so far for the Richmond Strikers, atop the Midatlantic Conference standings with a 3-0-1 record, 11 goals scored and 0 conceded at this point – positive statistics no doubt. A matchup with McLean Youth Soccer will put that to the test, as prolific Penn State-bound scorer Elizabeth Ball looks to keep rolling.

The two Colorado clubs (Rush, Real) come calling for SC Del Sol in Phoenix this weekend, and the Sol will look to maintain the top spot in the conference standings when they face both on Saturday and Sunday. Jorian Baucom continues to produce the goals, with 7 in 5 games as this point of the year.

MVLA, currently enjoying a bright start in conference play during their first year in the ECNL, looks to continue that success against San Juan Soccer Club.

Response to a loss is always the sign of a good team, and Eclipse SC fell for the first time this fall against Michigan Hawks last weekend, a 3-2 result. The opportunity to bounce back is on Sunday, with a visit by affiliate club FC Wisconsin Eclipse.

Out west, there are a plethora of important matchups despite it being early on in the season, as teams look to maintain early momentum. Real So Cal fits the bill of a team off to a good start in conference play, and take on Strikers FC, a side who has struggled so far.

A clash of Georgia clubs is set to take place this weekend, with Gwinnett Soccer Association facing the Concorde Fire. Rachel Garcia continues to be particularly influential for Gwinnett’s offense, with 8 goals in 8 games so far.