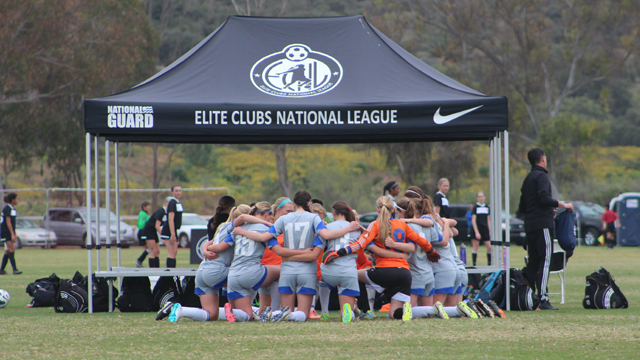 The ECNL season is slowly tumbling out of the gates as some teams jump into the fray while others wait in the wings. As we head into the final weekend of September, a handful of clubs are looking to close out the month in commanding fashion. Below is a breakdown of a few of the noteworthy games from ECNL play this weekend.

Michigan Hawks host St. Louis Scott Gallagher Missouri and Illinois this weekend as the Hawks look to continue their undefeated start to the season. Hawks midfielder Lilian Lucas leads the way with five goals in three appearances so far in 2014. Lucas was shut out against St. Louis Scott Gallagher Missouri in a 2-2 draw earlier this month. Lillian Schnieders and Gretchen Skoglund scored for Missouri in the meeting a few weeks back while Bria Telemaque and Kaya Frazier found the back of the net for the Hawks.

FC Dallas is hoping to keep the good times rolling with road games against Lonestar SC and AHFC over the weekend. FC Dallas is 3-0 on the campaign with a plus eight-goal differential. Halley Davidson leads the way with three goals and two assists to her name.

The other top battle in Texas is between traditional rivals Solar Chelsea Soccer Club and Dallas Texans on Saturday. Solar is 4-0 on the season and yet to let in a goal. Texans sit at 3-1 and lead the conference in goals scored with 12 already on the season.

Mustang SC and Pleasanton Rage head to Colorado this weekend to take on Colorado Rush and Real Colorado for a Northwest Conference showdown. Sophia Smith has been the main weapon for Real Colorado this season with four goals in two games. Colorado Rush is getting the season started this weekend, as these will be the first two games of the campaign. Mustang SC is 2-0 on the season with only one goal conceded. Pleasanton is in search of its first win.

West Coast FC is off to a hot start once again. Carlos Gonzales’ side is 4-0-1 on the season and takes on rival San Diego Surf this weekend. Mia Roth is the leading scorer for West Coast FC with four goals. Surf is in search of its first win after dropping its opener 0-2 to So Cal Blues last week.

Charlotte Soccer Academy makes the trek down to Florida this weekend for games against West Florida Flames and Orlando City. Charlotte is 2-1 on the campaign, but leading the division in goals scored with 15. Courtney Walker, Jessica Vue, Ashlynn Serepca and Mary Elliott McCabe all have scored three goals a piece for CSA. This weekend represents the first games of the season for the two Florida teams.

Eagles Soccer Club and Real So Cal are headed to Arizona this weekend for games against Sereno Soccer Club and SC Del Sol. Eagles are 2-1-1 on the season while Real So Cal is 1-2-1. All four teams are battling for spots in the always competitive Southwest Conference and a six-point weekend for any team could shake-up the standings heading into October.

In Texas, Lonestar SC takes on FC Dallas and TSC Hurricane over the weekend. Lonestar is looking to keep pace with Dallas Texans at the top of the division to start the season. Hurricane is right on the heels of both teams though. Parker Goins and Taylor Malham have been the catalyst of the TSC attack with five goals and seven assists between the two of them.

Chesapeake Division foes square off on Saturday when CASL and Richmond United meet. CASL is 2-1 on the season while Richmond is 1-0-1. Morgan Hall and Taylor Guy have both scored twice this season for Richmond, which is tied for top honors. CASL’s Claire Griffiths and Robin Pollard have also found the back of the net twice to lead the North Carolina crew.

The big meeting in the U17 age group is on Sunday when Sereno Soccer Club hosts Real So Cal. Sereno is off to a fast start this season thanks to four goals from forward Olivia Hernandez. Real So Cal is 4-0 on the season and yet to concede a goal heading into the weekend. The two Courtneys pace the attack as Courtney Corrin and Courtney Gazmarian each have scored three goals this season.