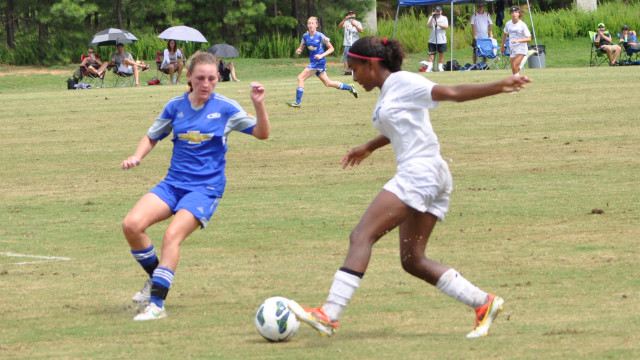 Another weekend and another massive slate of action in the Elite Clubs National League lies ahead. That includes a gathering of some of the youngest players in the Northwest.

Here’s a look ahead at some of the action.

This weekend several clubs at this age group are making the trip to the Pacific Northwest for a U14 showcase. They’ll face a trio of games on the slate, with two on Saturday and one on Sunday. Among those making an appearance in the Seattle area are FC Nova, Strikers FC, De Anza Force, Eagles SC, Utah avalanche, Heat FC, Real So Cal, San Diego Surf, San Juan SC, Crossfire Premier, Washington Premier, MVLA, Slammers FC, West Coast FC and Santa Rosa United.

Brazilian forward Catarina Macario heads back into action with her San Diego Surf side. A trip to Arizona is on the schedule, with SC Del Sol and Sereno Soccer Club on the docket. Midfielder Ana Gil will look to supply Macario’s goal tally in the coming season.

A bright start to for Charlotte Soccer Academy could wrap up with two more wins, as the North Carolina club team welcomes Atlanta Fire and GSA. Emery Noll and Olivia Odle have helped fire the offense so far.

After just one game of the season so far, the So Cal Blues are heading back to the field for a pair of games. Las Vegas Premier and Heat FC are making the trip to Southern California.

Colorado Storm forward Elisabeth Geraghty has five goals in her first six games in the early days of the season. A tough matchup against Real Colorado awaits on Sunday. Real boasts a solid attack, keyed by Malak Rafik, Brooke Sosa and Katie Joella.

There’s always action in Texas to watch out for with so many ECNL clubs in the Lonestar State. Dallas Sting is one of many in action, tussling with Challenge SC and Texas Rush. Lakyn Pope, Kristen Racz and Ellis Miller have all enjoyed bright starts to the season for the Sting thus far.

Close wins have been a recurring theme through Heat FC’s first four games of the season. They’ve only scored two goals each time yet emerged as winners in each of those previous wins. Lexington Magliarditi has been a focal point of the offense with two goals and two assists thus far. Heat travels to California for games against West Coast FC and So Cal Blues this weekend.

Scoring goals in bunches has been a theme so far for Gwinnett Soccer Association, bagging 28 goals so far this season in only four games. Jennifer Westerndorf, Amanda Vocelka and Ella Stevens all have at least six tallies, and will look to keep the attack rolling with games against Carolina Elite and Charlotte Soccer Academy.

After opening the season with an 8-0 win at the start of September, West Coast FC heads back into action with games against Heat FC and Las Vegas Premier. Hannah Lopiccolo’s five goals led the day in the first outing, along with Megan Schulze who scored a hat trick.

Up in Northern California, De Anza Forece takes on Mustang SC and San Juan Soccer Club, as the chase for the Northwest Conference crown continues in earnest.