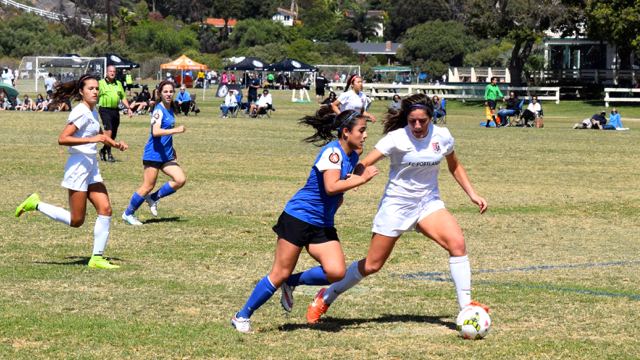 The fourth ECNL National Event of the season kicks off on Friday in Oceanside, California as 182 teams across the five age groups try to improve playoff positioning heading into the final months of the regular season.

With the U14 age group also on display at this event, there are going to be a number of players with national team potential on display in Southern California this weekend. Check out TopDrawerSoccer’s preview of the action below. And check back throughout the weekend for recaps from the games in Oceanside.

The top team in ECNL Championship Division standings Washington Premier kicks off action on Friday morning against Dallas Sting. Washington Premier (8-0) has been the boss of the U14 age group so far this season. The Northwest Conference leaders have only conceded two goals in eight games. The impressive defense will be tested this weekend with games against Dallas Sting, Real So Cal, and SC Del Sol on the horizon. Sting boosts a number of talented players that could trouble the Washington Premier defense in that opening game. Recent id2 camp standout Presley Echols is one of the leaders of the team with eight goals and three assists this season.

One of the best games on Friday comes in the 8:30 a.m. slot when Eclipse Select Soccer Club takes on MVLA. Eclipse is one of five teams still undefeated on the season with a 6-0-1 record. MVLA is 6-1 on the season and sits in sixth place in the national standings. Former U.S. U17 Women’s National Team head coach Albertin Montoya is in charge of the MVLA side, which is averaging over three goals per game through the first part of the season.

Match Fit Academy is another team looking to improve its record in Oceanside this weekend. The Northeast side is No. 11 in the Champions League standings heading into the weekend. Match Fit takes on Strikers, Mustang SC, and FC Portland during the three-day event. The Match Fit defense will get a big test on Saturday vs. Mustang as Elizabeth Ospeck looks to be a forward to watch in Oceanside with already 14 goals to her name this season.

The U15 age group gets off to a hot start on Friday with FC Stars of Massachusetts taking on San Diego Surf. Stars is the No. 1 team in the Championship standings while Surf sits at No. 5. Surf’s balanced attack could give Stars trouble as Renee Thomas, Mia Fishel, and Brooke Wilson have combined for 18 goals this season.

Real So Cal is trying to make a jump up the standings this weekend with the three games in Oceanside. Real So Cal sits in 13th place in the playoffs, and is one of five teams from the Southwest Conference in the playoff picture at this point. Midfielder Sofia Vinas is the leading scorer for Real So Cal with four goals. Eclipse Select sits in 16th place in the Championship standings and has only conceded four goals on the season in conference play.

Penn Fusion is one of the squads making the long journey to Oceanside. Fusion is 19th place in the Championship standings heading into the weekend. The Northeast Conference side takes on FC Nova, Arsenal FC, and Crossfire Premier while in Southern California.

PDA, the No. 1 team in the Championship Standings, is in action this weekend with games against West Coast FC, Real Colorado, and Orlando City. With all of those teams currently sitting in spots for the playoffs, this is bound to produce a number of great fixtures. The Real Colorado is led by U.S. U17 WNT forward Sophia Smith, who has 14 goals in only 8 appearances.

Jacksonville FC, the No. 2 team in the Champions League Qualification Standings, takes on FC Portland, Albertson Fury, and Crossfire United while in Oceanside. Albatross Fury is in the playoff mix as well, which should make Saturday’s showdown one to watch.

Colorado Storm, the No. 4 team in the Champions League Qualification Standings, also faces a challenging weekend in Oceanside. Storm takes on PDA, Bethesda SC, and Match Fit Academy while in Southern California. Storm is looking at Elisabeth Geraghty to keep carrying the load as the forward has 12 goals this season.