With only two weeks to go before the next ECNL Showcase, many of the top girls club soccer teams in the country were in action to prepare for the big event.

Action from Virginia and Northern California highlighted the slate. Check out how some of the top teams fared in this week’s ECNL Recap below.

West Coast FC cruised past Strikers FC in the opening game of the weekend on Friday by the tune of seven to one. West Coast’s six-goal advantage came on the feet of Holly Kaermerie and Remy Mathews who both had two goals on the day. Madison Bennett, Sydney Cooper, and Sophia Serafin all scored a goal each for West Coast. Antoinette Bailey had the lone goal for Strikers.

Alexandra Arenas’ hat trick was enough for Dallas Sting on Saturday in a 4-1 win over Lonestar SC. Arenas lifted her season total to five goals in seven games. Elissa Mentesana had the other goal for Sting. Dynastee Cain and Cami Floth both contributed assists in the victorious effort.

FC Virginia enjoyed a six-point weekend with wins over Carmel United and Ohio Elite Soccer Academy. The Nothern Virginia club notched an impressive win on Saturday against Carmel United with the first goal by second leading scorer on the team, Kaitlyn Small, giving her 5 goals on the season. The winning goal for FCV came from their team leading goal scorer Gabriella Gordon.

A convincing 2-0 win over Ohio Elite Soccer Academy wrapped up the club's trip to Richmond. The shutout was the team's 9th of the season lead by the center back tandem Isabella Gordon and Kelsey Hamer as well as keeper Randi Palacios. The first goal of the game came by direct kick where Gabriella Gordon increased her season leading goal tally to 11 for the season. Casey Kent followed up with the second goal further securing the win and increasing her season goal count to 5 tying her for second on the team. 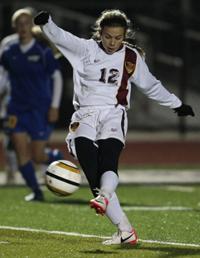 Santa Rosa United U15 picked up a big win over the weekend to stay in the playoff hunt. Trisha Ziemer’s side topped MVLA 3-0 to push its unbeaten run to four games. Brooke Dunbar scored twice and Bria Varnbuhler added the final tally. Chloe Colbert and Madison Gonzalez notched the assists on the day. Captain Brianne Parsons was also a major contributor for Santa Rosa in securing the shutout.

FC Bucks did not give up a goal in either of their contests over the weekend, but they only managed to secure four of the six points. FC Bucks played to a scoreless draw against FC Stars of Massachusetts on Saturday. The Pennsylvania club found the back of the net on Sunday thanks to goals from Amy Mandia and Emma Loving in a 2-0 win against Scorpions SC.

Internationals SC kept its top spot in the Midatlantic Conference over the weekend with a win and a draw. The Ohio club played to a 2-2 draw against Richmond Strikers on Saturday. Halle Stelbasky had both of the goals for Internationals. Olivia Mills and Simron Richard each scored a goal for Richmond in the draw. Internationals followed the draw up with a 5-1 win over Virginia Rush on Sunday.

West Coast FC suffered a brief slip up on Friday in a clash against Strikers FC. The Irvine club managed to hold West Coast to a 2-2 draw, which is only the second point of the season for Strikers FC. Isabella Diaz and Madeleine Simones scored the goals for Strikers.

Tegan McGrady, an outside defender with the U.S. U17 Women’s National Team, leads MVLA U16 in scoring after nabbing two goals in a 5-1 win over Santa Rosa United. Shaelan Murison Brown, Paulina Llama Bringas, and Jayme Hughes each scored a goal in the victory.

Carmel United made a big push toward a playoff spot over the weekend with six points from two games. The Indiana club topped FC Virginia 3-1 on Saturday thanks to goals from Mykayla Brown, Madilyn Mann, and Reilly Martin. Carmel United capped the weekend with a 2-0 win over McLean Youth Soccer on Sunday.

Brooke Pingrey scored twice as Crossfire Premier played to a 2-2 draw with Washington Premier in the Seattle Showdown on Saturday. Crossfire keeps hold of the top spot in the Northwest Conference with a 4-0-1 record.

Ohio Premier Eagles are still perfect this season. With road wins over Virginia Rush and Richmond Strikers, the Eagles are 7-0-0 in conference play, and 10-0-0 overall. The Ohio squad has a pretty comfortable lead at the top of the Midatlantic Conference.