It was another exciting and fun weekend in the ECNL with a top clash in Southern California, a blizzard in Utah, and a number of teams keeping their undefeated runs alive.

In the battle of two of the top teams in the SoCal Conference, Doug Swanson’s West Coast FC squad came out with a 2-1 win over San Diego Surf. Striker Sophia Serafin scored both goals to push her season total to 14 in nine games. Surf’s young Brazilian Catarina Macario scored the lone goal for the losing side. Macario has 13 goals in six games this season.

In Northern California, De Anza Force continues to crush the competition. Force recorded an 8-1 victory over San Juan Soccer Club on Sunday in its lone game of the weekend. Danielle Wheeler had three goals in the contest. Samantha Tran had one goal and three assists. 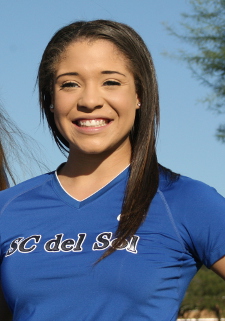 Neither the Avalanche nor a blizzard could slow down Colorado Rush on Sunday. Colorado Rush traveled to Utah for the clash against the Avalanche and was met with harsh conditions and snow on the field on Sunday. Rush still managed to put four goals in the back of the net and left with three points in a 4-1 win. Theresa Boade had a goal and an assist in the game.

Gwinnett Soccer Association stretched its winning streak in November to three games following a pair of victories over the weekend. On Saturday, GSA beat Charlotte Soccer Academy 2-1 thanks to goals from Rachel Heard and Jessica Moore. The next day, GSA defeated CASL Chelsea Ladies 2-1 with Heard and Moore finding the back of the net once again.

In its first game of the season, Minnesota Thunder came out victorious with a 2-1 win over SLSG-Metro on Saturday. Arielle DeLA Cruz and Keely Cartrett scored the goals for the Thunder. On Sunday, Thunder played to a 1-1 draw with SLSG with Carly Goehring providing the lone goal for the Minnesota club.

Real Colorado kept its top spot in the Mountain West Conference with a 4-1 win over Utah Avalanche on Saturday. Tatum Barton scored three goals and Julie Mackin had two assists in Real’s ninth win of the season.

Defender Emma Carlson scored her first two goals of the season on Sunday in a 3-2 win for Gwinnett Soccer Association over CASL Chelsea Ladies. U.S. U15 Girls National Team striker Jennifer Westendorf added the other goal. GSA also claimed three points on Saturday in a 2-0 win over Charlotte Soccer Academy. Amanda Vocelka and Kalli Vogel found the back of the net in that contest. Attacking midfielder Ella Stevens had assists in both games to push her season tally to 12 in 12 games.

Dallas Texans improved to 8-2-0 on the season over the weekend with a win against FC Dallas. Brittany Crabtree had a goal and an assist in the 4-0 victory. The Texans are level with Dallas Sting at the top of the Texas Conference.

D’Feeters Soccer Club recorded wins over Texas Rush and AHFC over the weekend. Midfielder Morgan Middleton led the way with a goal in both games, which were her first two goals of the season.

Oklahoma recruit Chelsea Jackson had a goal and two assists in a 6-1 win for Lonestar SC over TSC Hurricane on Saturday. Nia Stallings added a goal and an assist to the tally.

Michigan Hawks gave up only their fourth goal of the season on Sunday, but still managed to come away with six points from the two games. Hawks beat FC Wisconsin Eclipse 4-0 on Saturday, and then topped Sockers FC 2-1 on Sunday.

TSC Hurricane notched two victories over the weekend against Lonestar SC and Texas Rush. Hurricane sits in second place in the Texas Conference behind Dallas Texans, which are a perfect 11-0-0 on the season. Hurricane’s striker and Texas A&M commit Elizabeth Keester remains one of the top scorers in the nation with 14 goals and five assists.

Virginia Tech commit Bria Dixon scored twice on Saturday in CASL Chelsea Ladies’ 4-0 win over Atlanta Fire. Dixon has four goals and two assists on the season. Ohio State commit Alexis Degler added two assists to her stats in the victory. CASL keeps hold of the top spot in the Southeast Conference after the two wins over the weekend.