Facing two matches against the Utah Avalanche, the Colorado Storm piled on the goals, winning the games by a combined 13-0 score. Elisabeth Geraghty and Allison Schlegel each scored two goals and added an assist in one game for the Storm.

FC Virginia won a pair of games against visiting opponents, securing a 2-1 victory against Ohio Premier Eagles and defeating Internationals 2-0. Kathleen Brumagim and Gabriella Gordon provided the goals in the win against Internationals. 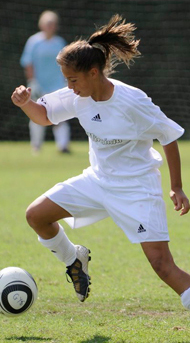 Taking its impressive start to the season on the road, Carmel United rolled against Richmond Strikers and Virginia Rush. After a 4-0 win against the Strikers – led by Alicia James’ two goals – Carmel won 6-1 against the Rush on Sunday.

Playing its only two games of November, FC Virginia extended its winning streak to six, winning 2-0 against Ohio Premier Eagles and 5-0 over Internationals. Julia Phillips and Tess Sapone scored in the game against the Eagles, while Jasmine Warren and Christiana Davey helped lead the offenses against Internationals.

Hosting a pair of clubs from further south, Charlotte Soccer Academy dropped its first game 1-0, before responding well the day after with a 3-0 win against Birmingham United.

The start to the ECNL season couldn’t have gone better for Ohio Elite Soccer Academy. Among a handful of clubs from Ohio going to the East Coast last weekend, the U16s came out rolling, winning 7-0 against Virginia Rush and 3-1 against the Richmond Strikers. Meghan Martella scored a hat trick against the Rush, while Mattina Girardot tallied against the Strikers, with Tara Claus chipping in two assists.

Betsy Brandon helped provide the offensive spark the Colorado Rush needed on a road trip to Nevada. In the two games, the midfielder had two goals and chipped in an assist as the Rush defeated Las Vegas Premier 4-0 and squeaked past Heat FC 2-1.

Almost all the offense Internationals would need over last weekend came from two players: Emily Ogle and Marissa Milazzo. The pair each scored a total of four goals in the first two games of the season, as Internationals beat McLean Youth Soccer 4-2, and won in a 6-3 shootout against FC Virginia.

Add Mykayla Brown to the list of players who know how to get things started. After assisting on the tying goal in Carmel United’s 1-1 draw against Richmond Strikers, the Indiana sharpshooter found the back of the net four times in a 7-0 win over the Virginia Rush.

VSI West FL Flames brought it against their in state opponents Orlando City Youth, scoring five times and keeping a clean sheet in a 5-0 victory.

Scrapping its way through two tough games at home, CASL Chelsea Ladies found a way to grab four points. After drawing 2-2 against Birmingham United, CASL picked up the win against Concorde Fire thanks to a 3-1 win.

The Colorado Rush took no prisoners against Las Vegas Premier and Heat FC, winning 15-0 and 7-1 respectively. Danica Evans, who scored nine of her team’s 22 goals on the weekend, now has 27 goals in only nine games so far this season.