(Scroll down for complete results from the U15 age group. Wednesday we will report on the U16 age group, and Thursday will feature the U17s, including full results)

ZAREPHATH, NEW JERSEY – If the U15 age group is any indication, the future for ECNL and girls’s soccer in America is pretty bright. At the PDA Memorial Day Showcase held last weekend, I saw a number of good teams and players, and more teams that can actually play with the ball on the ground, than I remember seeing in years gone by. 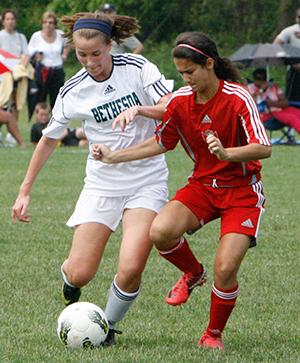 Bethesda U15 against GSA Phoenix.
Photo by Michele Hierholzer.

Here are some of the highlights from this age group:

Sean McCafferty’s Penn Fusion team can play. The squad stretched its legs to a 6-0 win over Soccerplus  Connecticut. Bryce Watts led the way with four points, but was far from the only weapon in the Philadelphia-area team’s arsenal. In fact, this team is missing some top players including midfielders Cecelia Knaub (injured) and Marisa Sheva (competing in the Pennsylvania State High School track meet), plus forwards Tyus Walker and Megan Giannopoulos (both injured).

But on Saturday the team showed its depth. Leah Becker was excellent at both ball-winning and distribution in midfield, while wide player Haleigh Echard can really strike and serve a ball.

The goals began when Shannon Skibicki’s long-range effort went through the hands of the goalkeeper to make it 1-0.  The fast and powerful Watts opened her scoring attack after running on to a good through pass from Skibicki and finishing well to make it 2-0.

After halftime, Watts made a weaving run into the penalty area before hitting a good left-footed strike for a 3-goal margin, but she was only halfway there. We first noticed her two years ago at the Jefferson Cup and  has only improved a notable goal-scorer’s instinct. Having scored with both feet, she next knocked one in with her head, making a good back post run to meet a well-served cross from Echard.

Echard’s next strike of the ball was a shot and it ripped the cords in back of the net for a 5-0 advantage. Watts then scored her fourth with a first-time strike after a grounded cross by Echard, providing the final margin of victory at 6-0.

Paul Riley’s Albertson Fury and Doug Bracken’s Ohio Elite battled to a scoreless draw in a match that featured some good chances and better defending.  Defending includes goalkeeping and OE keeper Samantha Leshnak made some good early saves for the Cincinnati-area side, including one on an effort by Albertson’s Joanne Miller.  Leshnak also showed good distribution both in the kick and the throw, throughout the match.

Albertson right back Caroline DeBonis utilizes her speed well to run down a lot of players in the defensive end. Goalkeeper Nathalie  Nidetch made a nice stretch save on a shot by Ohio’s Ashton DeBoe.

In the 2nd half, Ohio came close to scoring when Tara Claus hit a good cross, but Addison Smith’s header flashed just wide of the goal. A penalty claim for the squad was also denied. Albertson then came close to scoring as well with Samantha Miesemer lobbing just over the bar and Miller hitting a drive off the crossbar.

Goalkeeper Leshnak almost broke the ice herself with a 50-yard free kick that was between the sticks but a little too strong. Albertson’s Kristina Carnaj responded with a shot off the post, and the match ended in a scoreless draw.

Dallas Texans have a good team in this age group. Sean Bubb’s squad beat Bethesda Eintracht 5-2 and looked good in the process.

It was the Maryland side who almost scored first however, when a volley from defender Madeline Pack set off a scramble in front of the Texans’ goal, but the danger was cleared and the match remained scoreless. Texans’ forward Brittany Crabtree shows good awareness, can play with her back to the goal and has a good first touch. Bethesda’s Keaira Clark hit a shot just wide of goal. Clark is a hard worker in midfield and wins a lot of balls for her team.

Crabtree made it 1-0 for her team when she sprung the offside trap and finished well. Emily Bates quickly doubled the Dallas advantage with a fine strike. Early in the 2nd half, Brooke Hartsock made it 3-0 before turning provider in setting up another goal from the smart and skilled Bates.

Bethesda’s Rachel Alexander made a strong run down the right and hit a good grounded cross, but the finish from Marina Callahan was just wide. Brooke Hartsock then made it 5-0 by directing a serve from Payton Shlemon into the back of the net.

Bethesda kept fighting and Ellis Pierre’s team tallied two quick goals later in the 2nd half. Alexander set up Krista Pitts to make it 5-1, followed by a Mekela Davidson strike for the final scoreline of 5-2.

Look out for the PDA U15s as well. William Bustamante’s squad really likes to knock the ball around and they’ve got some exceptional talent to go with the smart soccer brains on this team, as displayed in a 2-0 win over Carmel United. Click here for our video interview with Coach Bustamante.

PDA Forward Taylor Racioppi is just plain big-time. She is full of attacking ideas, has good footwork and can drive the ball on a line both in shooting and serving. Another player with excellent footskills is midfielder Jenny Haskel, while forward Elizabeth Kinkler also brings a good combination of skill and strength.

It was Kinkler who scored PDA’s first goal, converting a good pass from Gianna Bustamante. Erin Trapp scored the 2nd for the New Jersey side.

Carmel got good play from Grace Myers, a good ball-winning midfielder, and Madison Lewis, an agile attacker, while Annika Schmidt showed some good steps to the ball in the back line.

Full U15 Results for the Weekend