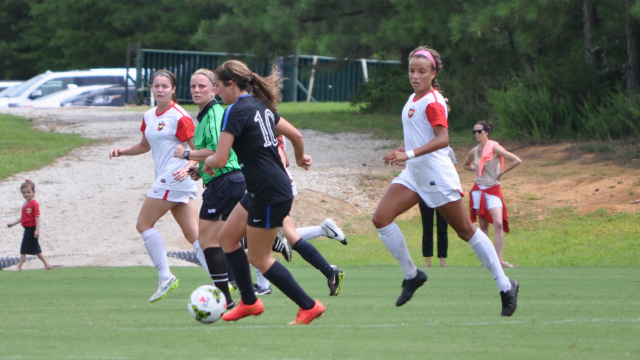 The ECNL season is pushing into its second month, which provides us with a landscape of outsize individual performances and impressive team returns. Which teams stand aside from the pack as legit title hopefuls come June and July? And which have exceeded expectations?

Here are five squads from each of the five ECNL age brackets that’ve caught our eye so far this season.

If you believe in the march of progress, the Southeast Conference is the region of the future. Soccer already has firm footholds in the Northeast and on the West Coast, but SEC country is a bellwether. The moment soccer catches fire in the gut of America, the moment we can begin to say it has arrested the wider consciousness of the nation.

That’s perhaps why the Southeast Conference in leagues like the ECNL is so intriguing. It has more room to grow than anywhere. Teams from this conference tend to struggle on the higher stages, but Concorde Fire is making hay this season. In its first eight games, the Fire are 7-0-1 and sport a ridiculous 35-4 goals-to-goals against record. Led by twin forward engines Lauryn Oliver (7g, 4a) and Nicole Payne (8g), the Fire are an offensive juggernaut. Plus, there may not be a better midfielder in the conference than Croix Bethune, who’s dumped in eight goals and four assists in eight matches. Watch out.

The ECNL Playoffs can be a proving ground for teams ready to take the next step. It certainly appears to have been that for the Hurricane, who finished second in a difficult U16 group in Seattle last year. That put them just three points off the pace for the ECNL Finals in Richmond. Now, as U17s, they’re attempting to rectify that and go one step further in 2015-16, and they’re on pace. The Hurricane are dominating the Texas Conference, posting six wins from their first seven on the back of 2017 Arkansas commit Parker Goins’ team-leading eight goals and five assists. This isn’t a team of superstars, but the Tulsa-based outfit has the ability to make Richmond this year.

We’ve spilled plenty of ink on this Real Colorado age group, but it deserves re-mention now that it’s begun the season with such a bang. This group has somehow failed to win a national championship despite its myriad talent, which is as much of a commentary on the depth in the ECNL as it is the inability to break through. All eyes of course will be trained on Mallory Pugh, who scored two goals in her first two ECNL games of the season before she treks off to UCLA next summer. But look at the rest: Alexandra Nillen, Alyssa Kaiser, Tatum Barton, Julie Mackin, Cydney Billups. There isn’t a team that’ll match up one-on-one with this side, and the fact that they took 10 points from their first four games of the season is proof.

It was only two years ago that the Hawks won the U14 national title behind a 2018 class most think is in the top three in the nation, if not the best overall. Based on the early returns this year, the 2020 crew could be just as good. Dig this: through their first six games as an ECNL team on the U14 level, they’ve won six games and outscored opponents 21-0. It hardly gets better. Emma Hisock looks to be next in a long line of talented Hawks forwards with high level DI soccer in their veins, while a supporting cast featuring players like Joyelle Washington (4g, 2a), Grace Kelley (2g, 5a) and Sydney Kloosterman (3g, 2a) have been imperious through their first six. Death, taxes and the Hawks’ ability to restock: life’s constants.

This area of the country is one of those old institutions with a number of ingrained talent production factories, so to dominate it means you’ve found a formula and hammered away at it. Credit Richmond United for being so good through its first five games that it already has four wins and a 24-7 goals-to-goals against ratio. Consider too the Chesapeake Division contains teams like McLean SA, and you’ve got something here. McKinley Burkett is establishing herself as one of the primetime players to watch in this region going forward, as her nine goals and six assists through just four games can attest. If her supporting cast can alleviate some of the pressure, you’ll be seeing plenty of this Richmond United team splashed across headlines in Seattle next year.