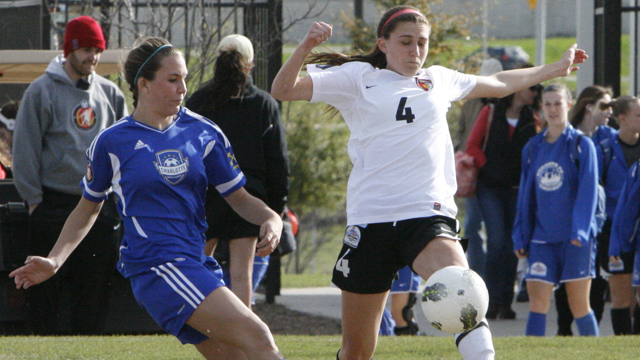 With the regular season now winding down, every ECNL matchup takes on massive importance for teams vying for a Top 16 spot and a chance to compete for the national title in Chicago this summer. 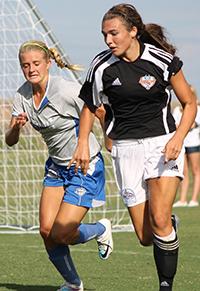 Here’s a look back at some of the best games from across the league this past weekend:

Needing wins to keep pace with the Dallas Sting, the Dallas Texans won 4-1 against Solar Chelsea, thanks to a pair of goals from Emily Bates and two assists from Brooke Hartsock.

PDA put together two strong performances in winning 3-0 over East Meadow and 5-0 against Albertson SC. Elizabeth Kinkler scored in each game, while Montana Sutton and Gianna Bustamante also helped spur the attack forward.

“The team is playing very well and creating many scoring opportunities while our defense is solid and keeping the opposition blank,” PDA U15 head coach Billy Bustamante wrote TopDrawerSoccer.com in an email. “I am proud of the work rate and the consistency of level play throughout all of these games.”

Five different scorers found the back of the net on Saturday in FC Stars of Massachusetts’ 5-0 defeat of Soccerplus Connecticut. Liisi Vink-Lainas put in a good performance to help it make two wins from two for FC Stars on Sunday, a 3-1 win against Connecticut FC.

In the Northwest, Crossfire Premier put together back-to-back shutouts. Karlene White scored twice in a 3-0 defeat of Pleasanton Rage, and Sunday White grabbed a goal and an assist in a 2-0 defeat of Mustang SC.

McKenzie Taylor scored the winner on a fortuitous bounce for West Coast FC in a 1-0 win over Eagles Soccer Club. In the second game of the weekend against two of the best U15 sides in the country, So Cal Blues squeaked past West Coast 1-0 on the back of a Miranda Schulz goal.

Although they didn’t concede a goal all weekend, Real So Cal only managed four points from their two-game weekend. After tying 0-0 against Slammers FC, goals from Alexandra Bruder, Hannah Dearborn and Rebecca Harrison powered Real So Cal to a 3-0 win over Arsenal FC.

Slammers managed to win their other game of the weekend as well, a 1-0 defeat of Irvine Strikers. MacKenzie Cerda bagged the game winner in that one.

So Cal Blues opened its weekend in ideal fashion, rolling past Crossfire Premier 4-0, Nicole Faris scoring twice. But West Coast FC thwarted the Blues’ search for two wins. Jamilah Tejan scored for West Coast and Kaitlin Klawunder tallied for the Blues in a 1-1 draw on Sunday.

Clare Shea played an important role in World Class FC’s two-win weekend. After picking up two goals in a 4-0 defeat of Albertson Fury, she scored again on Sunday as Alana O’Neill also found the back of the net in a 2-0 defeat of East Meadow.

Chatham DeProspo also helped boss the midfield for World Class across both games.

It was another high-scoring weekend for TSC Hurricane, which made a trip to Texas for a pair of clashes.

After opening up with a 7-0 defeat of FC Dallas – thanks heavily to Anna Beffer’s four-goal outburst – Hurricane won again on Sunday, a 3-1 win against Solar-Chelsea. Beffer added two goals in that game for good measure.

Back on the East Coast, Scorpions SC couldn’t stop scoring either. Led by one of the ECNL’s top scorers McKenzie Meehan, Scorpions beat Connecticut FC 10-1, with Meehan getting four goals on the day. That came a day after Meehan scored twice to help defeat Connecticut FC 3-0. Meehan now has 33 goals in 17 ECNL games this season.

West Coast FC rolled to two wins, a 3-1 defeat over Eagles SC, before following that up with a 3-0 win against the So Cal Blues.

It was a weekend where Slammers FC continued to stamp its authority on the SoCal Conference. Winners of both games, a 3-1 defeat of Real So Cal and a 5-1 drubbing of Irvine Strikers, Slammers extended its winning streak to six games. Makenzy Doniak and Natalie Donaldson were particularly influential, getting on the score sheet for the Slammers.

FC Stars of Massachusetts extended its winning streak to seven with a 3-0 win against SoccerPlus Connecticut and a 5-1 defeat of Connecticut. Hayley Dowd was once again leading the attack scoring four goals in those games.

After losing Saturday to PDA by a 3-1 score, East Meadow bounced back in a big way against World Class FC. Marissa Christy led the way with two goals, and Shea Bullen and Catherine Kinney also scored in a 5-0 win.

Courtney Fedor, Defender, Crossfire Premier U15: It was a very strong performance from Fedor’s Crossfire side, which didn’t concede a goal in two games to come away with two wins.

McKenzie Meehan, Forward, Scorpions SC U17: Her torrid scoring form continued, as she bagged six goals in two games over the weekend.

Elizabeth Kinkler, Forward, PDA U15: Grabbed a goal in each game as PDA won big, 3-0 and 5-0 in its two games over the weekend.

Hayley Dowd, Forward, FC Stars of Massachusetts U18: Another incredibly consistent goal scorer scored four goals over the weekend, as her side picked up six more points.

Brooke Horvatich, Midfielder, Eagles Soccer Club U16: A goal and an assist for Horvatich in two games helped her Eagles side bag four points from two games.

Erin Owen, Defender, Slammers FC U18: The defender helped her team to a six-point weekend and grabbed a couple of assists, and also only conceding two goals.

Anna Beffer, Midfielder, TSC Hurricane U17: Scored six goals and added two assists, as her TSC Hurricane side outscored the opposition 10-1 in a pair of wins.