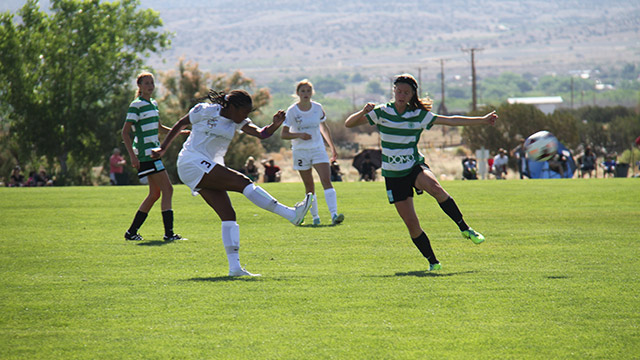 Albuquerque, N.M. (June 21, 2014) – Teams have earned berths in the final matches at the 2014 US Youth Soccer Region IV Championships, in Albuquerque, N.M. The winners of tomorrow’s games in the Under-13 through Under-19 age groups qualify for the US Youth Soccer National Championships, the oldest and most prestigious youth soccer national championship, July 22-27 at the at Maryland Soccerplex in Germantown, Md.

Four defending Region IV Champions have the opportunity to win back-to-back titles tomorrow, and three teams have the chance to advance to the National Championships and capture back-to-back National titles.

A few highlights from today’s matches…

Under 15 Boys Pateadores San Diego (CA-S) defeated USA 99 Premier (UT) 2-0 in a match featuring two players with eight goals heading into the semifinals in Pateadores’ Christopher DePetro and USA Premier’s Aaron Nixon. Both players failed to score, but Angel De Leon scored for Pateadores, and Michael Benito added an insurance goal in the 38th minute. Pateadores will hope to defend their region title in the finals against Santa Clara Sporting 98 Green (CA-N).

Under 16 Boys Santa Clara FC is one win away from defending their two-time defending regional championship, and cementing their opportunity to defend their two-time national title after defeating TSA 98 Red (AZ) 2-1. Brandon Sanchez was the hero for Santa Barbara as his two goals propelled them into the finals. Sanchez’s first goal came in the 47th minute, but six minutes later TSA’s Julian Gaona equalized. The stalemate lasted until the 77th minute when it was Sanchez again who broke the tie giving Santa Barabara the lead for good. Santa Barbara will take on SC del Sol 98 Colavecchia (AZ) in the finals tomorrow.

Under 17 Boys LVSA 97 Red returns to the region finals for the first time since 2010, which is the last time the Region IV Championships were held in Albuquerque, N.M. after a 4-1 victory over Eastside 96 Red (WA). Miles Mcrae broke the stalemate right before halftime in the 45th minute to put LVSA up 1-0. Eastside, who had defeated two former region champions in the quest to the semifinals, was not going to go away easy. Isaac Reed knotted the match back up at 1-1 in the 63rd minute after an Eastside corner was deflected around in the box before Reed was able to capitalize. It was Mcrae again who broke the tie in the 77th minute, and Jackson Dietrich and Tristian Blackmon ensured the victory with goals in the 83rd and 90th minutes respectively.

Joining LVSA will be Valparaiso United FC 97 (AZ), whose game against West Coast FC Gould (CA-S) went into overtime after a scoreless 90 minutes. Valparaiso’s Juan Hernandez scored the game’s first goal in the 105th minute, and it looked as if the score was going to end at 1-0. West Coast’s Bryce Kaminski refused to let that happen in the 111st minute when a chested down pass turned into Kaminski volleying a rocket into the back of the net. The match would end up going to penalty kicks, where it took seven kickers each to decide the winner. Christian Camacho’s shot for West Coast sailed just over the crossbar, and Valparaiso’s Hernandez coolly scored his penalty for the win, and a berth to the regional finals.

Under 14 Girls defending region and national champion Legends FC 99 (CA-S) defeated Exiles Black (CA-S) 1-0 to advance to the finals thanks to a goal from Emily Knous in the 70th minute. Legends will take on La Roca Premier PO (UT), who won in dramatic fashion against Santa Clara Sporting 99 Green (CA-N). Sophia Mendoza got Santa Clara on the board in the 29th minute, only to be matched by La Roca’s Anna Escobedo in the 42nd minute. Olivia Wade scored the game winner off a set piece that deflected off the wall right before the end of overtime. La Roca is guaranteed a trip to the US Youth Soccer National Championships thanks to Legends already qualifying through the national league.

Under 16 Girls Beach FC 97 Academy (CA-S) continued its impressive run with a 4-0 victory against SC Sporting 97 White (CA-N). Savannah DeMelo scored her sixth and seventh goals of the tournament in the 20th and 52nd minutes. Sandwiched in between DeMelo’s goals was Rocio Rodriguez’s goal in the 49th minute, and Daria Petredes added a fourth in the 63rd minute. Beach FC has now scored 22 goals in the tournament while still failing to concede one. PacNW 97 Maroon (WA) will try to end that streak in the finals tomorrow.

2012 US Youth Soccer National Champion Legends FC 96, who have qualified to the national championships via the national league in the last two years, failed to do so this year, and a Region IV Championship is their only hope left for a third straight trip to nationals.  Legends got one step closer today by cruising to a 4-1 victory over San Tan 97 Legacy (AZ). Mikayla Flores got Legends off to a quick start in the eighth minute and Dayna Garcia doubled the lead right before halftime. Ashlee Smith and Michelle Alozie also added goals in the second half giving Legends a date with Pride Predators 97 (CO) in the finals.

The lone Albuquerque, N.M. team playing today, Rio Rapids SC 01 (NM) lost in a 4-3 thriller against SJ Earthquakes 01 Pre-Academy (CA-S) in the Under 13 Boys group. Marco Ruiz only needed seven minutes to score the first goal of the match for SJ Earthquakes. Skylor Rose retaliated in the 13th minute for Rio to tie things up. Fabian Rodriquez and Oscar Govea scored right before halftime to give SJ Earthquakes a 3-1 lead. However, Rapids came roaring back again with Jayson Baca scoring in the 49th minute, and Rose again three minutes later for the 3-3 tie. SJ Earthquakes had the final say though, when Hugo Bonardi scored the game winner in the 69th minute to secure a spot in the finals. SJ Earthquakes will take on the defending region champs, FC Golden State 01 (CA-S), in the finals tomorrow.

In the Under 12 Girls group, So Cal Blues Baker (CA-S) took care of PacNW 01 Maroon (WA) 5-1 with Isabella DAquila netting a hat trick to go with goals from Kendyll Fritts and Kendall Carter. So Cal Blues will take on another Washington team in the final in Washington Premier FC 01 Black (WA), who survived penalty kicks against Scottsdale 02 Blackhawks (AZ) to advance to the finals.