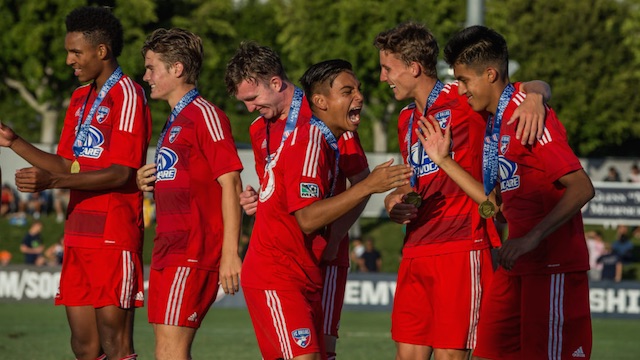 The Generation adidas Cup is coming. And it’s towing with it some powerful, heavy-hitting games.

The GA Cup kicks off April 7 in Frisco, Texas for a collection of MLS’s top academies and a few huge invitees from abroad. Notably, clubs like Real Madrid, Eintract Frankfurt and Flamengo will flood into Texas for a week of matches signifying a huge waypoint in the year’s elite youth soccer festivities. Since the cup starting inviting international teams, MLS academy sides have found sledding tremendously difficult in the vaunted Championship Division. Can they turn the tide in 2017?

There are dozens of games on the schedule, all of which will be streamed live on MLSSoccer.com. But a couple stand out above the rest. Indeed, you’re going to want to clear your calendar for these five humdingers.

This is the only game I’ve included from the Premier Division, which is considered the secondary competition for teams that didn’t qualify for the more prestigious Championship Division. And I’ve included it for a pointed reason: it could be a coming out party for NYCFC on a more national stage than they’ve ever had before. Yes, NYCFC is beginning to seep into academy showcases at the U16 level, but they don’t yet have a U18 team, and this U17 group is the oldest they’ve ever fielded. The chance to possibly see talents like Giovanni Reyna and James Sands on the field together is enticing, and this should act as a weathervane of sorts for the NYCFC academy system. Are they progressing that way the front office wants? This match against Pumas, which has a quite successful youth system in Mexico, should provide some answers.

This, without a shadow of a doubt, is the single most anticipated game of the entire group stage in any division at the event. The FC Dallas U17 team strolled through qualifying, and they announced earlier this year that they’re making both Jesus Ferreira and BRyan Reynolds available for the tournament. Whether they’ll play is one thing, but the fact that two Homegrowns could well see time against one of the most stacked academy groupings in the world should be something to behold. It’s unlikely Real Madrid brings their A-Team U17 group, but even a B-Team (or C-Team, really) could challenge the best MLS has to offer. And make no mistake, FC Dallas is the top of the crop right now. Fresh off a U16 and U18 national title sweep, expect fireworks on the last day of the group.

MLS teams have historically struggled against Brazil youth teams in international competition. Last year, for instance, CA Paranaense swept its three group games (including RSL) with an 11-0 combined scoreline and then won the title. Part of that is the emphasis on one-v-one battles, an area where MLS has historically struggled. Is it making progress? Using the vaunted LA Galaxy academy as a litmus is a good place to start. One of the best players in the country is available, and whether he’ll be selected or not it’s worth it to watch the Galaxy exclusively for Efrain Alvarez (he’s eligible, anyway). Flamengo has a historically quality production apparatus and is usually in the top third of the Brazilian Serie A. This should be a good gauge to see how good the LA Galaxy can defend space and individual technical brilliance.

Everyone on the American side of the development game knows how good Atlanta United is these days. But given how relatively young the academy is, that isn’t a particularly known fact outside a fairly small bubble. They’ve never had a better chance to announce their overarching talent than here, against one of Argentina’s two best developer clubs. Believe it or not, Atlanta United could make Homegrown players Christopher Goslin and Andrew Carleton available, even though both could miss due to U17 MNT camp in advance of the CONCACAF World Cup qualifying tournament later this month. In any case, there’s enough talent to spread around to make Atlanta United officials excited about scoring a major win (and some major points) on an international level.

Every year around this time, the veil falls off the Toronto FC academy in the U.S. Most on this side of the Canadian border aren’t privy to TFC’s academy (now known as TFC III) because it doesn’t compete in the Development Academy. Instead, TFC’s academy teams are entered in an exclusively Ontario-based league, which creates some intrigue for southern onlookers. TFC has historically done well in this competition, and it tends to hold its own against even the heaviest of hitters invited to Frisco. The question this year is whether it’s ready to take the next step and compete for a championship. Like Atlanta United, TFC has a U.S. U17 star in Ayo Akinola who may or may not play in this competition for want of qualifying minutes, but TFC is still good enough to turn some heads. Can they do it against one of LigaMX’s resurgent powers? We’re about to see.