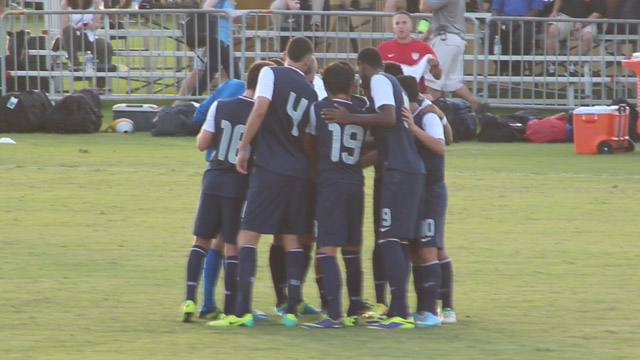 LAKEWOOD RANCH, Fla. — Joe Gallardo can’t tell you exactly where Wednesday’s performance ranks among his best ever. But he can tell you it’s close to the top.

Gallardo was at his elusive best Wednesday, scoring a hat trick to guide the U.S. U17 side’s 5-1 rout of England in the second of three games at the Nike International Friendlies. L.A. Galaxy Academy forward Haji Wright scored the other two goals.

In the NIF opener on Monday, the U.S. was well on its way to a draw with Portugal when a shock 91st minute decider dealt them a 2-1 defeat. But Wednesday’s results fell perfectly, allowing the U.S. to dream of a second NIF title in three years. Portugal and Brazil drew 1-1, and the U.S. rolled over England two hours later on the same field to give the Americans a shot at winning the event with a win against Brazil on Friday and an England result against Portugal.

And Gallardo’s incredible day on a warm night in front of a packed house - the attendance numbers swelled thanks to the presence of the Development Academy Showcase here this week - helped drag them back into contention. Gallardo scored the first two U.S. goals for a 2-0 lead at halftime, and after a pair of Wright goals, he cleaned up a rebound to give the U.S. its final 5-1 scoreline. Even by Gallardo’s lofty standards, the Monterrey man was on a roll.

“It’s an amazing feeling,” Gallardo said. “I just want to say thank you to all my teammates for supporting me and helping me out there.”

Gallardo scored his first in the 13th minute when Pierre Da Silva got loose on the left and shuttled in a low-flying cross that met Gallardo at the back post. He slid underneath his marker and punched in the goal for a lead the U.S. never gave up.

His second was, by his own admission, his favorite on the night. He collected a loose ball about 25 yards out and lit off for the penalty area. At the edge of the box, he froze his defender solid with three ankle-snapping feints before pushing into open space and lashing home with his left off the keeper’s outstretched glove from just inside the area.

He got his final goal in the 85th minute to complete one of the best days of his young international career.

“Joe works extremely hard. He’s been great for us,” U.S. U17 coach Richie Williams said. “He’s got a nose around the goal. He’s able to score goals, and that’s what we need on the international level. Joe did extremely well, and so did the whole team.”

Gallardo had help. The starting U.S. front line of Gallardo, Wright, Da Silva and attacking midfielder Alejandro Zendejas rolled forward in the first half with few issues, while the back line, helmed by the statuesque Daniel Barbir at center back, was resolute. England’s only goal came off a curling free kick from slippery midfielder Marcus Edwards less than two minutes after halftime.

The turning point came soon thereafter when U.S. keeper Will Pulisic put his name on the U17 map. In the 54th minute with the U.S. clinging to a 2-1 lead, Arsenal-owned forward Kaylen Hinds was pulled down in the box when he got a step inside on the touch line and then stepped up to take his own penalty.

He went left, but so did Pulisic. The Richmond Strikers keeper parried away the kick, and the U.S. went on to score three goals more in the final 20 minutes to put it away. It was doubly impressive considering this was Pulisic’s first substantive international experience on this level.

“Coming out in the second half, we talked about making sure that we had a good start,” Williams said. “We were slow to come out and gave up the goal and we gave up the penalty. For Will, it was basically his first international game and he made a great save, kept us in the game, and we were able to bring some guys on and we got the goals in the end we needed.”

Similar to Gallardo, Wright enjoyed a memorable night. He put away a goal to put the U.S. up 3-1 in the 72nd minute, and his second included a lovely bit of skill to get around a defender before he cut a tight angle for a 4-1 lead eight minutes later. He played off Gallardo’s shoulder and was more or less un-guardable when he went on his stabbing runs from deep.

If the U.S. can beat Brazil on Friday - something neither England or Portugal were able to do - and England gets a point from Portugal, the Americans are the champs. There’s still more to do, but Wednesday’s lashing was a good step in that direction.