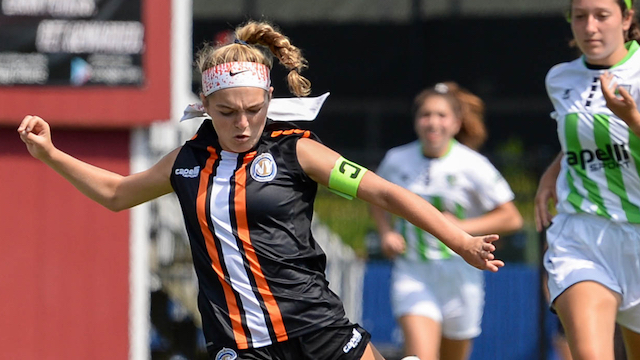 The Girls Academy League kicked off the inaugural season in one of the most testing years in history. The frequent shutdowns and ongoing event cancelations have made the first few months of the season anything but ordinary.

“At the moment the GA league is in many ways equivalent to sliding behind the wheel of a new ride,” PA Classics Girls Academy Director Todd Wawrousek told TopDrawerSoccer. “Nice look, solid components, good design, yet nominal miles on the road to determine performance and feel, however, a bit too much time in the garage at the moment. More clubs than not, especially older age groups, have only played a handful of games due to pandemic parameters and safety protocols. However, early indicators validate a wide breadth of quality in both former DA clubs as well as new clubs in our platform. We all look forward to the return of playing every week and gaining some rhythm.”

New York Soccer Club U18/19 head coach Anthony Ferraro also sung the praises of the league when asked about his impressions of the first few months of competition.

“I have very much enjoyed the first half of the inaugural season of the GA League,” Ferraro told TopDrawerSoccer. “The organization of the league and the flexibility of all clubs within our Northeast Conference has allowed for our players to have a fantastic fall season, even through the difficult COVID-19 pandemic. I am very fortunate as a coach to be a part of this collaborative philosophy of development with like-mind members across the Northeast Conference.”

On top of everything else, the U18/19 age group is facing even more challenges as players go through their final club soccer seasons with such usual times. For the players who have committed to a college for the next level, it’s turning into an unceremonious ending to their club careers. For those still searching for a new home, the extended recruiting dead period has wrecked havoc on the college sports landscape.

There are gems to be found in the new league, and some teams are proving their quality through the first few months of the season.

New York Soccer Club raced out to a 5-0 record in league play. Recent Stanford commit Lumi Kostmayer has been at her best in the attack as the squad ripped off 29 goals in those five games. Jilly Shimkin has also been a name to watch for Anthony Ferraro’s squad.

“The key to success through these unique times has been my unwavering confidence in the New York Soccer Club curriculum and the application of that curriculum each training session throughout the week in advance of all matches,” Ferraro said. “In this amazing club I have had the confidence and support of NYSC club leadership to continue to challenge our players to pursue their meaning of excellence while always remaining steadfast to our NYSC Core Values along the way. We have a clear way in which we believe the game should be played and it is very important to the players that this be our identity this season from start to finish.”

Ashley Moon, Madeline Pirrello, and Joyce Ryder are among some of the other standouts on NYSC. Remington Sandell (center back), Megan Sical (goalkeeper), and Esme Brayshaw (winger) are some of the uncommitted gems that should have college coaches tuned into NYSC games in 2021 as they look for late additions to their programs that could be difference-makers.

NEFC is chasing NYSC at the top of the table in the division. NEFC is 2-0 through the opening stage of the season. NEFC hasn’t been back on the field since October. South Shore Select is another one in the hunt with a 2-0-1 record.

PA Classics has ripped off five wins to start the season. They are the only team with a perfect record in the Mid-Atlantic U19 division. Classics has only conceded two goals through those handful of games.

“We expanded our 19's roster this year to insure adequate depth in the environment of Covid and affording players the latitude to play high school,” Wawrousek said. “That measure has provided opportunity for new players to join our side and the result has been quite refreshing, most notably their willingness to learn, fulfill their respective roles, and play for each other. We have been fortunate to be on reasonably good form with different lineups, defended quite well as a group and scored some timely goals. We look forward to meeting a challenging schedule whenever we return to play in early spring.”

Erin Greiner and Jenna Daveler have been among the standouts for PA Classics. Greiner, a recruit for the class of 2021, is the target for the PA Classics attack but she also has the skill to slot in as an attacking midfielder. The uncommitted prospect is a hidden gem, as she lost a season due to an ACL injury and return to the squad this fall. Daveler is a versatile defender who can fit in out wide or in the center of the defense. She is a top recruit from Pennsylvania for the class of 2022.

IMG Academy and Tophat GA Gold are battling it out at the top of the table in the Southeast U19 table. IMG Academy is 9-1 this season. Michelle Cooper has been leading the attack this season. The Duke commit scored five of the 12 goals during the last weekend of action for IMG in November.

Tophat GA Gold is 9-1-1 through the first 11 games. The Georgia side has scored 56 goals during that stretch. Arianna Manrique, Simi Awujo, and Madeline Simpson have each scored seven goals each. Danielle Lewin is leading the team with six assists.

SC Wave has been a surprise across the board as the Wisconsin club has been dominant in the Mid-America division in nearly ever age group. The U19 team is 6-1 through the first few months.

Midwest United FC is also in the hunt in the Mid-America division with a 10-2 record. Midwest scored 45 goals in 12 games this season.

Caroline Coleman, Amelia Horton, Dilary Heredia-Beltran, Lexington Watts, and Riley Smith are pacing the attacking for Sporting Blue Valley, which is 10-2-1 through the first few months of the season.

Houston Dash is trying to chase down the top team, but Sporting claimed a 3-1 win in the meeting between the two sides during the last game of 2020. Houston, like many teams in the U19 age group, will need to replace some top talent during the spring as players head off to college early. Leading scorer Haley McWhirter enrolled early at East Carolina and will leave a gap in the attack for Dash in 2021.

Despite California not allowing youth sports since March, every team in the Southwest has played at least two games this season. SC del Sol has already moved to the top of the pack. The Arizona side is 7-0-2 through the first few months. Utah Royals FC-AZ is also in the hunt with a 7-2 record.

The Northwest Division has not begun league play yet.