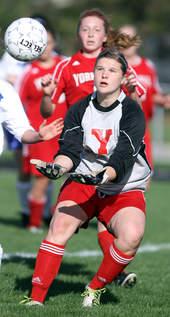 An agile and mobile player, having the opportunity to play soccer at Santa Clara has been a long time coming for Madison Gonzalez.

“Since I was a little girl, I had always wanted to go to Santa Clara,” she told TopDrawerSoccer.com. “They have a great soccer program and a phenomenal coach, and I was lucky enough to experience his coaching style.”

While she certainly had a strong desire to continue her playing career at the vaunted program, during her recruiting process that close-knit nature of the team certainly didn’t hurt.

“The camaraderie of the women's soccer program at Santa Clara felt like home to me, because of the closeness I have with my club team,” she said. “My club team is my family, and at Santa Clara they feel the same way too. On top of that, Jerry [Smith]'s coaching style is one that I understand and have grown up playing my whole life. It is an easy transition for me.”

There was a long list of positives that drew goalkeeper MacKenzie Lee to make the decision to play at Northern Illinois.

“I decided to commit to NIU for several reasons,” Lee told TopDrawerSoccer.com. “The growing soccer program under head coach John Ross and staff, and the excellent Special Education Degree program, the outstanding facilities, and the proximity to my family so they can come to watch my games.”

The netminder was particularly drawn to the team by the way Ross and the rest of the staff challenge the players.

“This coaching staff has set high standards for the girls to reach their full potential athletically and academically,” Lee said. “I believe that the Huskies will continue to improve and be very successful.”

As for the school itself, it was important for Lee to stay in the Midwest, as she considered other programs like Illinois State, Ball State and Southern Illinois. But her first choice had too must to offer.

“The NIU campus is beautiful,” she said. “The new dorms they have for all freshman athletes are amazing. The atmosphere at the school is very welcoming. It is not too large of student body where I would be overwhelmed and the students seem to be very supportive of the athletics.”

Midfielder Brynn Schlemitz (OP Eagles) committed to Ohio State for the class of 2014.

Midfielder Victoria Ahde (Match Fit Academy) committed to Rutgers for the class of 2014.

Midfielder Jayne Lydiatt (Real Colorado) committed to Oregon for the class of 2016.