Add yet another player with a U.S. youth national team to the future ranks of Irish women’s soccer. 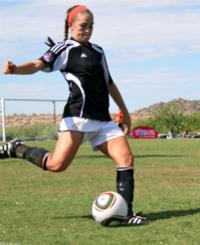 Niro, who is competing for a spot on the U17 WNT for the 2014 World Cup, found plenty to like about the powerhouse program.

“I decided to commit to Notre Dame because of the great combination of soccer and academics,” she told TopDrawerSoccer.com. “I loved everything about my experience on my visit and the players on the team were all so nice. I always wanted to play in a competitive conference like the ACC where every game presents a different challenge. It is also a great location where my parents and little brother can come watch my home games.”

Head coach Randy Waldrum and his entire staff have taken the program a long way, and that’s another enticing prospect which drew the Eclipse Select midfielder to make her commitment.

“The soccer program has a great coaching staff that I know will challenge me and the entire team to reach their full potential,” Niro said. “Everyone involved in the program has goals of winning national championships, which is something that I love about my club Eclipse Select right now. The style of play at Notre Dame is also passing oriented which suits me well.”

A connection with longtime head coach Jerry Smith was one of the first pieces of the puzzle as Katie Pingel embarked on her college search.

A technical player who is comfortable with the ball at her feet, she played for Smith with the ODP Region IV team, making trips to Costa Rica and Florida.

Along with that, Pingel noticed how prominent her sport is at the school.

“Soccer is the main sport there and not football,” she told TopDrawerSoccer.com. “Soccer is like football there. They have a beautiful stadium that the local pro team uses right in the middle of the school. So the field is a pro field. It has what I wanted as far as great players, great coaches and that family environment. I want to play with girls that want to win for each other. I really had that feeling there.”

In recent times, plenty of top recruits have committed to the program as well, and Pingel was excited about the opportunity to play alongside some of her future teammates down the road.

“Being a 2016 I looked at the classes coming in and was impressed with those classes,” she said. “There will be many other top players I will be playing with. I am honored to have the opportunity to play for a team that has won a national championship and had several final four appearances. I'm happy to be part of the tradition and look forward to continuing it.”

Another technical player and outside back, Annaly Ferrell didn’t take long to know that Brown was the right place for her.

“The moment I stepped on to the Brown campus, I knew it was where I was supposed to be,” she told TopDrawerSoccer.com. “I care a lot about school and being on the number one team in the nation, I am a very competitive and hard working soccer player. Brown offered the perfect balance between school and soccer. In addition, I have always wanted to win an Ivy League championship and be ‘All Ivy’ and I am positive that Brown can get me closer to those dreams.”

Then of course, there was also the chance to pursue an Ivy League education that didn’t hurt.

“The campus is very impressive and the overall atmosphere is very energetic and happy,” she said. “The quality of education that I will receive will stay with me for the rest of my life. Also, Brown is the only major university that allows their students to create their own course of study.”

Goalkeeper Amy Annala (Panthers SC) committed to Northern Illinois for the class of 2014.

Midfielder Keile Kropf (FC Boulder) committed to Vermont for the class of 2014.

Goalkeeper Kaelyn Johns (Penn Fusion) committed to Dayton for the class of 2015.

Midfielder Cecilia Knaub (Penn Fusion) committed to Penn State for the class of 2015.