Girls Commitments: A part of history A hard-working forward who aims to outdo her peers on the field, Stephanie Fabry didn’t take much convincing to make her commitment to join the Badgers. 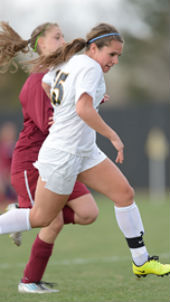 “Wisconsin has always been at the top of my list because of its competitive women’s soccer program,” she told TopDrawerSoccer.com. “Staying close to home and being a Wisconsin Badger were important factors. I strongly considered Marquette and Iowa State, but decided that Wisconsin was the best fit for me.”

Head coach Paula Wilkins played a significant role in helping Fabry know how she would fit into the team down the road.

“Coach Wilkins spent a lot of time with me discussing their style of play and how my skill set would help the team,” Fabry said. “Wisconsin's program is already competitive and I believe they can be a serious contender in the NCAA tournament in the coming years. Also, the competitive training environment, amazing coaching staff, and the team itself really sold me.”

By making her commitment to UIC, Paige Proctor will be a part of history, the first recruiting class of the school’s women’s soccer program that will begin in 2014.

That was one of the reasons that drew her to the school.

“UIC is a great academic school, first and foremost,” she told TopDrawerSoccer.com. “I really like the idea of being the first class to play women's soccer at UIC.”

She also liked the proximity to home, being a Chicago native, along with the school’s impressive facilities and chances to get a head start on a career.

“I feel I will have great internship opportunities as well as job opportunities as far as my education goes,” she said. “The view from the dorm is awesome! I can't wait to become a Flame in 2014 and represent UIC in the Horizon League.”

The grass is not always greener.

That sums up Lauren Conley’s conclusion after going through a long recruitment process. The heralded Colorado forward recently committed to the University of Denver.

“Deciding on Denver was one of the most complicated decisions I have ever made,” Conley told TopDrawerSoccer.com. “Honestly, for most of the recruiting process, I had it in my mind that I would go far away from home to a new location to play soccer. But the more I went on visits and looked at the options, Denver again and again seemed like the best choice for me.”

“Coach Jeff Hooker and coach Kris Peat at Denver had seen me play more than anyone. They cared about me as a player and a person,” she said. “They made it all the way to the Round of 16 last year and I can't wait to contribute to such a great program.”

Midfielder Brooke Leftwich (Sereno SC) committed to Wofford for the class of 2014.

Forward Sunshine Soriano (Heat FC) committed to Seattle for the class of 2014.

Midfielder Chelbi Orrick (Albion Hurricanes FC) committed to Texas for the class of 2014.

Forward Chinelo Odobulu (Albion Hurricanes FC) committed to SMU for the class of 2014.