Samantha Coffey, one of the top ten players in New York, is a technical, creative, high-energy playmaker that loves the one-and-two touch game and probing the defense for weaknesses. 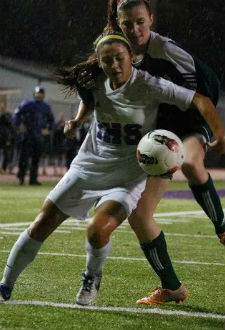 She has her sights firmly set on the ACC, after verbal committing to Boston College, a school that felt like home from the start.

“I love the coaching staff, and felt so welcomed into the team family and the whole BC community,” Coffey told TopDrawerSoccer.com. “It's a superb academic school with a strong spiritual base, and both of those things were tremendously important to me, and when you factor in the quality of the program, the style of play and the chance to play in the ACC, one of the very best conferences in the country, well, that's a hard combination to top.”

“They never pressured me or played any games when they were recruiting me,” she explained. “They even encouraged me to look far and wide and to go through the process carefully, because it was my process. How many coaches do that? They are coaches who have created a demanding but nourishing atmosphere - a family atmosphere - around their team, and I have no doubt it will be a place I can keep working to get better and thrive as a student, player and person.”

The lure of living and playing in a city like Boston was significant to Coffey as well.

“Boston is the ultimate college town, and BC has the best of everything - a gorgeous campus that is just a short T [public transport] ride into a world-class city,” she said. “I am a serious and committed student, and the infrastructure BC has in place to help their student athletes was also a big plus.”

Coffey is the first verbal commitment to BC for 2017.

Head coach Chad Bodnar just wrapped up his first season in charge of Eastern Washington, checking in with an 8-9 campaign. However, his plan and ambition to improve the Big Sky program is drawing the interest of recruits like Devan Talley.

“I committed to Eastern because of the great new coaches and the goals they have for the future teams,” Talley told TopDrawerSoccer.com. “I like that they are getting much better each year and that the coaches are trying to transform the soccer program to become a large and high demanded soccer program.”

Talley’s other options included Creighton and Arizona, but instead she elected to head across the state to EWU, located on the border with Idaho to join Bodnar’s squad next fall.

Away from a soccer, exciting developments on campus and nearby towns provided compelling reasons for her commitment.

“I like that the school is close together and flat,” Talley explained. “Also, each year they are improving the campus with new buildings. It's a great college atmosphere and the town of Cheney and Spokane is amazing.”

Four players are verbally committed to EWU for 2015.

Midfielder Katia Novi (Sockers FC) committed to SMU for the class of 2017.

Goalkeeper Carly Stevens (Jacksonville FC) committed to Rollins for the class of 2015.

Forward Courtney Daugerdas (Eclipse Select) committed to Ohio University for the class of 2016.

Forward Theresa Boade (Colorado Rush) committed to Duke for the class of 2017.

Midfielder Jessie Fleming (Norwest SC) committed to UCLA for the class of 2016.