A vocal leader who thrives in net, Julia Reneau didn’t need a lot to be convinced that Washington State was the right place for her. 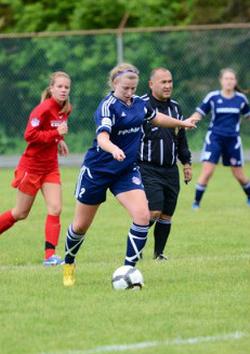 “As soon as I arrived in Pullman I knew it was where I wanted to be,” she told TopDrawerSoccer.com. “I was able to visit many other schools but after spending the day with the WSU coaches, seeing the facilities, talking with players, and touring the campus it immediately became my top choice.”

While competing in the Pac-12 is no easy task, Reneau is confident that new coach Keidane McAlpine – appointed in January 2012 – has the ability to lead the Cougars on an upward trend.

“I was impressed with the vision coach McAlpine has for the program and a desire to be the top team in the Pac-12,” she said. “Also, coach [Mat] Cosgriff has a proven track record of developing outstanding college goalkeepers and I'm very excited about working with him. All of the coaches work well together and create a family environment within the team. That is something that I really wanted to be a part of.”

Despite a more remote location – Pullman is on the border between Washington and Idaho – the school’s campus and town were also a definite plus for her.

“Pullman is one of the best college towns in America,” Reneau said. “The campus is beautiful with the traditional college campus feel I was looking for. There is so much school spirit at WSU and I have heard only great things about the school from many alums. They have strong academics and a good business program as well.”

With a specific major in mind, Hannah Goff had a firm idea of what she was looking for during the recruiting process – and it’s what helped lead her to commit to a program not too far from her family.

“I was looking for a great academic school where I could challenge myself and major in biology as well as continue my love of soccer by playing and competing on a top rated soccer team,” she told TopDrawerSoccer.com. “There were many factors that went into my decision-making but UMBC made it simple for me with all it has to offer on both the academics and soccer team. The college is close to home and with my family always being involved in my soccer, it was a very easy decision.”

Along with that, things just seemed to fall into place when it came to picking UMBC.

“I really enjoyed the school, team and coaches during my visit, it just clicked,” she said. “I love the strong bond the team shares with each other on and off of the field. I also like the way that coach [Leslie] Wray and coach [Steve] Campbell run their training sessions and I admire their coaching philosophies. I feel that I will work well with them and can contribute to the team to make it stronger.”

Midfielder Charlene Burger (FC Portland) committed to Montana for the class of 2014.

Defender Brianna Westrup (Slammers FC) committed to Virginia for the class of 2015.

Forward Brooklyn Varnadore (Santa Rosa United) committed to Colorado for the class of 2015.

Midfielder Mairead Forrest (PDA) committed to Holy Cross for the class of 2014.