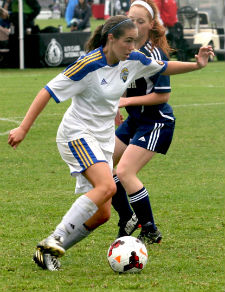 An attacking player who looks to create and keep her team’s offense moving, Elisabeth Geraghty didn’t have to look outside her home state for the right college program.

“I decided to commit to Colorado because it had everything I could have possibly wanted,” she told TopDrawerSoccer.com. “I believe it fits me academically and athletically, better than any school could. I knew I wanted to go there, even before the idea of playing soccer there even crossed my mind.”

Geraghty said that she fell for the school’s soccer team, and that it’s the right fit for the kind of player she is.

“At CU, I feel that my style of play is very similar to how they coach there and their instruction will develop my play in a positive way,” she said. “Also, It has always been a dream of mine to play Division I soccer in college and to have the opportunity to play in such a competitive conference (PAC-12).”

The Colorado Storm standout knew that it was the right place for her, and that she’d go there even if soccer wasn’t an option.

“I'm very connected to the school to begin with because my dad went to CU Med and my brother goes there currently,” she said. “It’s very important to me to stay close to family, so one of the reasons I like Colorado so much is that the school is close to home (but not too close). Not to mention the campus is beautiful. Who wouldn't want to watch the sun set over the mountains every night?”

A smart and physical defender who likes to start the attack as well as snuff out the opposition’s opportunities, Julia Gilliam was swayed to swap California for Indiana by what the school offered on and off the field.

“Both the soccer and academics of Indiana influenced my decision to be a Hoosier,” Gilliam told TopDrawerSoccer.com. “I want to go into business and The Kelley School of Business is considered among the best in the country.  It has an amazing reputation with a great opportunity to excel. I like to be challenged as a student and athlete, so Indiana is the perfect fit for me.”

Head coach Amy Berbary enters her second season at IU this fall, fresh off a strong opening season that saw the Hoosiers post a 15-7-1 mark and make the NCAA tournament.

The program’s success caught Gilliam’s eye, before getting to know the whole coaching staff.

“I grew a connection with coach Berbary, coach [Sergio] Gonzalez, and coach [Benji] Walton when I visited,” she said. “They play the style that suits my strengths and want to develop a winning program. Winning is an important factor for me, and I am so excited about the direction of the program and the goals they have set.  I want to help the Hoosiers become the Big Ten Champions, and along with that, make deep runs in the NCAA playoffs. And who knows, maybe along the way we will get to play for a National Title.”

Forward Cyera Hintzen (Dallas Sting) committed to Texas for the class of 2016.

Midfielder Alex Murdoch (Concorde Fire SC) committed to Furman for the class of 2015.

Forward Sarah Osborne (Maryland United FC) committed to Clemson for the class of 2016.