For Tara Sullivan, an athletic forward from one of the nation’s most recognized clubs, a lot of her commitment to Mississippi boiled down to targeting an ideal conference to compete in. 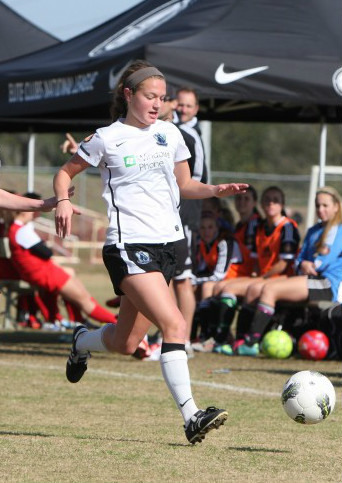 “I made my mind up that I wanted to play in the SEC and after stepping foot on the Ole Miss campus I knew it was the right place for me,” she told TopDrawerSoccer.com.

It wasn’t just the conference, naturally, but everything else seemed to fit in place as Sullivan went through the recruiting process.

“Coach Matt Mott and his staff really made me feel at home,” she said. “By the time I left I felt like I was already a part of their soccer family. I'm very excited about the direction the soccer program is heading. Each year Coach Mott has been there they have moved up in the RPI ratings and I really feel they are on the way to being one of the best teams in the SEC. I like their style of play and enjoyed being around the current players.”

The school’s location and campus also helped lure the attacker.

“It has a small town feel even though it's a major university,” she said. “Everyone I met there was so nice.  I also really liked the layout of the campus, the dorms and the great facilities.”

As is a relatively common in recruiting circles, the lure of playing in one of the best conference’s in the country helped influence a player’s choice to commit – in this case, Beryl Smith, an aggressive midfielder from Texas.

“I decided to commit to Miami because it plays in a great soccer conference, the ACC,” she told TopDrawerSoccer.com. “They play against the best teams in the country. Along with that, Miami is a very good academic school. The university is highly ranked nationally and has high academic standards.”

The opposition is just a small part of the whole package when it comes to playing at the next level, and Smith also cited head coach Tom Anagnost’s influence, as well as the rest of the coaching staff.

“They have high expectations for the team and really encourage hard work and a positive attitude,” she said. “The coaches put a large emphasis on the character of the player, which I think is really important. I like how the team plays my style of play and is looking to make great progress in the upcoming seasons.”

South Florida seemed like a pretty decent draw to Smith as well.

“I really like the location of the school,” she said. “The campus is gorgeous and Miami is a great city. I also like how Miami’s athletic programs are really important at the school. There is a great atmosphere at all the sporting events.  I like how all the sports get a good crowd of supporters and how the student athletes attend games to support other student athletes of a different sport.”

Chelsea SC) committed to Trinity (Texas) for the class of 2014.

Defender Brea’Anna Sanders (Carmel United SC) committed to Purdue for the class of 2014.

Midfielder Mollie Whitacre (Pacesetter SC) committed to Ohio University for the class of 2013.