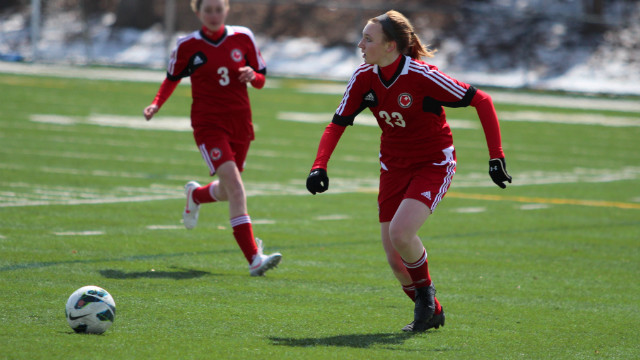 A creative central midfielder who recently made the move to the Minnesota Thunder Academy in the ECNL, an official interest initially sparked Maddie Castro’s interest in staying close to home.

Then, she got to know the women’s soccer program and it became clear to her that this was the ideal place for her.

“I decided to commit to Minnesota because the coaches and players are incredible people, there facilities are fantastic and geared towards being successful and I really like the style of play they have, it was everything I wanted in a soccer program and school,” Castro told TopDrawerSoccer.com.

“The school has a lot of resources and it had a really good program for my major,” Castro explained. “Minnesota also has a lot of school spirit so it really feels like you are a part of something huge whenever you are on campus.”

Six players are committed to Minnesota for the class of 2015.

One of the biggest questions facing any recruit with the option to play college soccer is the level to pursue: from DI through DIII or even NAIA.

That was the question that faced Lauren Roe, who eventually decide to go the DIII route and verbally commit to the University of Scranton.

“The first time I met coach [Colleen] Pivirotto, we met alone and she made me feel welcome and had a genuine interest in me as a student first, then as an athlete,” Roe said. “Even if I took soccer out of the equation, Scranton is still a school I would love to attend and that aspect of the recruiting process was important to me. The girls I met on the team during the ID camp made me feel welcome and two even communicated with me afterward about their Scranton experience. That really sealed the deal for me."

Part of her research into the program involved watching a lot of game film, and Roe was surprised somewhat at the level on display at Scranton.

“The quality of soccer was much stronger than I expected for a DIII program. The game looked as fast as many DI games and the skill level of the players was impressive. When I shared the team’s post-season performance over the past several years, my dad made me realize that the coach must be amazing. Then I had an opportunity to interact with several team members at camp and it became clear that the players coach Pivirotto recruited were talented, intelligent and very personable. It is a great team atmosphere and I can’t wait to be part of it on a daily basis.”

Unlike some of her peers, Roe isn’t 100 percent sure of her academic aspirations, and Scranton’s diverse array of majors appealed to her, along with the school’s size.

“My admissions counselor is a former athlete at Scranton and also grew up not far from me in CT so I felt a sense of community,” she said. “The school is gorgeous and the dorms are amazing. The size of the school is just right at 6,000 students, not too small and not a 50,000-student campus either. It is a little closer to home so my friends and family get to see us play.”

Defender Hadyn Gabbert (Spokane Shadow) committed to Sacramento State for the class of 2015.

Midfielder Kelsey Gilbert (Boston Breakers Academy) committed to Providence for the class of 2016.

Forward Jamie Kutey (KC Metro) committed to Marquette for the class of 2015.

Forward Kate Maher (Eastside FC) committed to Brown for the class of 2015.

Defender Anna Cronin (Oakwood SC) committed to Connecticut for the class of 2016.

Forward Lauryn Bruffet (D’Feeters) committed to Mississippi State for the class of 2015.