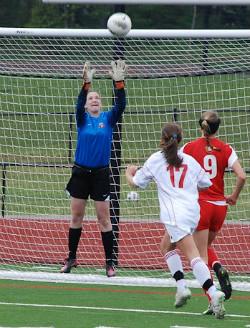 Like many other players her age, Kaelyn Johns had a long list of things she was looking for in a prospective school.

She found all of that, and more, at Dayton, where she committed earlier this summer.

“Dayton is one of the top private Catholic universities in the U.S. and academically, it provides a large selection of academic programs including pre-med which is one major I am considering,” she told TopDrawerSoccer.com. “I was drawn to the community atmosphere of the campus. Coach [Mike] Tucker and coach [Tiffany] Hansen played a key role in my decision. Tucker has led the Dayton program to great success in the Atlantic 10 conference and has a strong history of developing players into NSCAA All-Americans.”

A goalkeeper who takes pride in her shot-stopping ability, she is eager to continue the proud tradition of the Dayton women’s program.

“The team has been the Atlantic 10 regular season champions 10 times,” she said. “And, they have made eight appearances in the NCAA Tournament. I was looking for a strong Division I program that would compete every year to make it to the NCAA Tournament and Dayton is definitely a school that meets that requirement.”

“As a goalkeeper, I prefer to play on grass fields and Baujan Field at the University of Dayton will offer me that opportunity,” she said. “The field is located right on campus making it ideal for students and faculty members to come out and support the women's soccer team. Baujan field has provided the Flyers with a significant home field advantage in the past five years and I can't wait to play on that field and create my own soccer memories.”

A native of Winnipeg, Canada, Alexsondra Moar definitely went the extra mile in order to get seen by American college coaches.

The attacking midfielder split time with Ajax SC, based in Ontario, and Omega Select FC down in Kansas City, Missouri to get exposure. Based off of that, she landed at the right fit.

“After conducting a few visits and having discussions with a number of other universities I ultimately chose Jackson State,” she said. “From the moment I stepped onto the campus for my visit I found everyone to be friendly and inviting. While on my full day visit I was permitted to sit in on a political science class and gained an idea of the academic strength of the school.”

Under a relatively new head coach – Dean Joseph enters his second year in charge this fall – Moar is optimistic things will trend up for the team not too far down the road.

“It is my impression that the soccer program is going to become better every season and based on my discussions with coach Joseph I feel like I will have a chance to be part of that process and make a positive contribution,” she said.”

A competitive and hard-working player, Briyanna Femia is excited about taking her game to the next level.

“I decided to commit to Rider after being taken on a tour of the University by coach [Daryson] Hounsome,” she told TopDrawerSoccer.com. “On the personal tour I got to meet some of the girls and really got a good feel for the school. I feel very comfortable with coach Hounsome, he has a great understanding of the game of soccer and I’m really excited that I get to play the next four years of soccer for him!”

The soccer program had everything that Femia was looking for, in terms of how competitive it is and how they play. Also important to her was how close it is to home.

“Distance and academics were extremely influential for me as was the soccer program itself,” she said. “I love that Rider is only 20 minutes from my family, and the program I’m majoring in is spoken highly of.”

Forward Lakyn Pope (Dallas Sting) committed to Oklahoma State for the class of 2016.

Goalkeeper Sabrina Macias (Colorado Rush) committed to BYU for the class of 2015.

Defender Youn Jae Baek (SoccerPlus CT) committed to Connecticut for the class of 2014.

Forward Katharine Richards (FC Wisconsin Eclipse) committed to Wellesley for the class of 2014.

Defender Miranda Hudleston (Huntsville FC) committed to Ouachita Baptist for the class of 2014.

Forward Tayler Fitts (Zionsville SC) committed to Cincinnati for the class of 2014.

Midfielder Mallory Burman (Tennessee SC) committed to Austin Peay for the class of 2014.